To the fall of "Rain" and other mouthpieces of the creative class. Why did they stop giving money to them and who will take their place 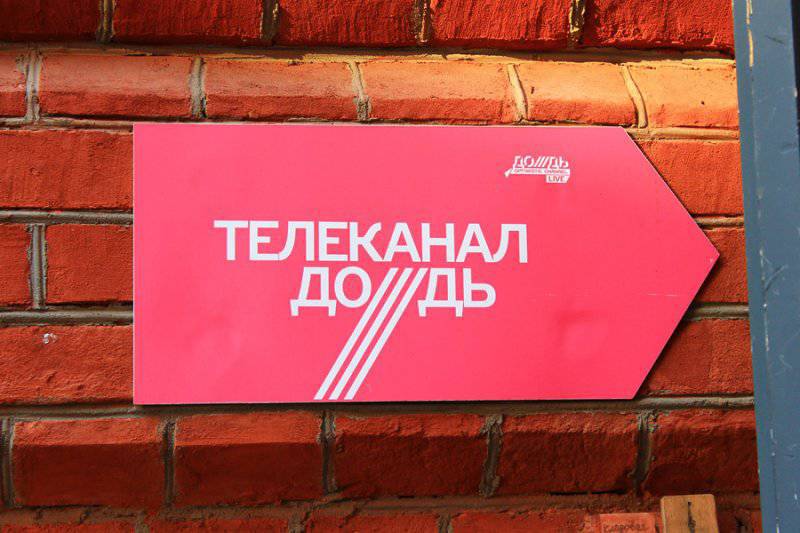 
If someone suddenly doesn’t know, the Dozhd TV channel is a conglomeration of rebellious showmen, actively covering swamp riots a year after their completion and exposing the horrors of Stalinism after 60 years after the death of Joseph Stalin. A television channel was created in 2010 for a specific audience, on which great hope was placed in subsequent Moscow events. However, the audience in reality did not justify hopes, which soon affected the financial condition of its media horns.

Thus, the “acute” social talk-show by Ksenia Sobchak “State Department” on “Rain” was closed by the decision of the general director Natalia Sindeeva. The reason - a low audience rating. Sindeeva said that the channel will try to restart the program in September in a new format that has yet to be found.

By the way, this will be the fourth attempt to find a format for the “State Department”. What ordered to live long now is even called the “State Department 3”. Initially, the show was broadcast on MTV, but after the first release it was taken off the air - the channel did not like the format. Then KA Sobchak dragged it to the Internet broadcast on the Snob website, but it did not last long there, migrating to Rain after the third reincarnation.

Strange, agree. It seems to be a hot topic, and guests are handshaking, but there is no rating.

The situation with television journalist Parfenov is also bad. After throwing on TV channels, he also came to the “Rain”, where he recently launched his weekly social program “Parfenov”, but now there is not enough money for it. Although you need only 100 million rubles per year. The first issues were sponsored by the father and son Gudkov together with Ilya Ponomarev, but now, apparently, this source has dried up, as Parfyonov opened a fundraising company with television viewers.

However, this is a problem not only of specific programs, but also of the entire TV channel. Recently it became known that he is switching to a paid broadcast. This means that the viewer will now have to pay from 10 to 40 rubles for one-time viewing of live broadcasts and authoring programs.

CEO Sindeeva recognizes that such a move is likely to cause an outflow of viewers, but, apparently, the channel has no other financing options. By the way, if you are a fan of it and want to support financially, then you can invite Natalia Sindeeva to dinner. It will cost you only 1 million rubles.

The project “Public Television of Russia” (OTP), which has become one of the last products of Medvedev's presidency, could be a salvation from media collapse for creakls. But this channel in the course of its carrying has undergone dramatic changes. Previously, we already wrote about the difficulties with the collection of funds, which, in theory, were to ensure its functioning, but now on this initiative finally put an end to it.

As it became known recently, OTP will be financed by the state on 100%. The government has recognized the failure of the idea of ​​collecting tens of billions of rubles from the audience (the amounts from 30 to 100 billion rubles of target capital were previously voiced). As a result, it was decided to allocate funds for the channel under the state program "Information Society".

That is, at the output we received another federal channel. That, perhaps, for the better. If initially it was planned as “socially urgent”, now we are promised “programs about science and culture, high-quality documentary and Soviet cinema”.

On this occasion, by the way, the head of OTR, Anatoly Lysenko, was recently interviewed by Ksenia Sobchak, who accused him of refusing to create an “opposition channel investigating the crimes of Putin’s inner circle.” Here is a very significant fragment from the conversation:

“Lysenko: Very interesting were the developments (for OTR - ES) on how to show the way of the law to life on the example of the law on fisheries, which was taken along with the Public Opinion Foundation. Really curious…

Sobchak: Do you really think that the law on fisheries is really interesting for the emerging civil society in Russia? The law on rallies - yes, the law on children - yes.

Lysenko: Tomorrow I will give your phone to my fisherman friends. I do not envy you. Do you know how many people in the country are passionate about this thing? About twenty million people.

Sobchak: While there is no social protest, do you think that requests for liberal freedoms, freedom of speech are not so important?

Lysenko: That is история our development, in our society, these requests have always been not very significant. Take the 1913-14 years, the most such ... I now have a bzik, I wish I would not deal with this outrage, but would make a film on this topic. After all, who then spoke most of all? Not workers and peasants, but the liberal intelligentsia. By the way, first of all, she was under attack with a piano thrown out of the windows, with philosophical steamers. It was the engine, not the legend of the workers 'and peasants' revolution. ”

Woe to the vanquished

What we are seeing now is not a separate misfortune for the showmen lost in the life of the show or the Dozhd TV channel - it is a systematic collapse of the information mouthpiece of creacles. As noted above, the crackers with the task entrusted to them on the street failed. They did not cope so well that the sponsors have no sense in spending on their further encouragement.

The reasons for this may be different versions. But the result is indisputable: for yesterday’s media elitarians this turned into a real tragedy. Where can I get 100 million to Parfyonov for creativity, who will give Sobchak to Courchevel?

The hope that ordinary representatives of “disgruntled townspeople” will take upon themselves the heavy burden of financial support for exposing the state will not be even unreal — they are ridiculous at all. The self-respecting craacle today is saving money for a trip to Egypt. Million for dinner with Mr. Sindeeva in his budget does not provide.

An example of an OTV is proof of this. Yes that OTV - in the eyes of the projects that require, and much smaller fees. Big City Magazine (the owner of which, incidentally, Sindeeva, and the investor, her husband Alexander Vinokurov) does not know who to sell and is being blackmailed by his own “unique creative team,” the Colta website has sunk into something like a coma, followed by followed by the "public Internet project OpenSpace."

All of the above doesn’t mean that the information field is free from the influence of the anti-state media lobby - it was not for nothing that they had been bossed for two decades, teaching them to write about their state with the intonation of tired disgust and asserting that this is professionalism. It would be naive to assume that the disappearance of the most costly horns of anti-state propaganda will change this intonation.

It’s just now that this disgusting and tired stance towards Russia is left without grants and private investors by media chapters with them in the state-financed media. And if the state relaxes, it will soon receive a hundred “eh of Moscow” at public expense.

Ctrl Enter
Noticed a mistake Highlight text and press. Ctrl + Enter
We are
About Stalin and KhrushchevWhat you didn't want to know about England
88 comments
Information
Dear reader, to leave comments on the publication, you must to register.