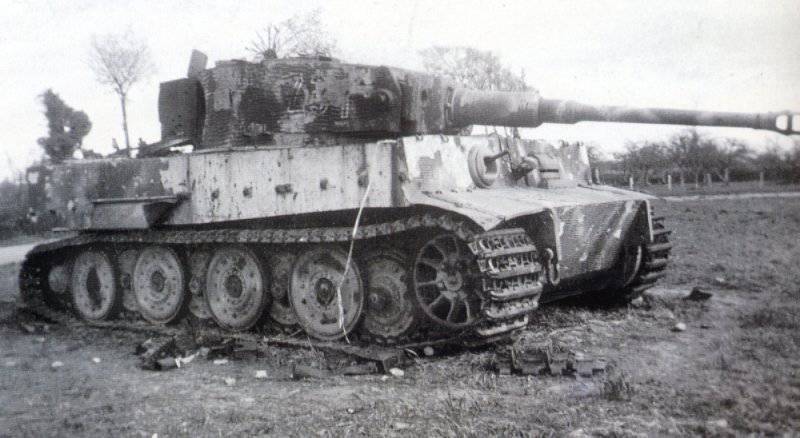 (According to the foreman of Kostromin)

In January, 1944, at the breakthrough of the blockade of Leningrad, the commander of the battery ordered me to advance and select the forward observation post.

The distance to the enemy was 900 m. I with three signalers and two scouts with stereo-pipe and binoculars headed along the highway to choose an observation point. Signalers behind us pulled the wire. Having approached the enemy on 400 m, I saw a burnt self-propelled 76-mm unit standing on the highway and decided to settle here (Fig. 1). Inside the self-propelled gun, we installed a stereo pipe and started watching. Signalers have established a connection with the battery. 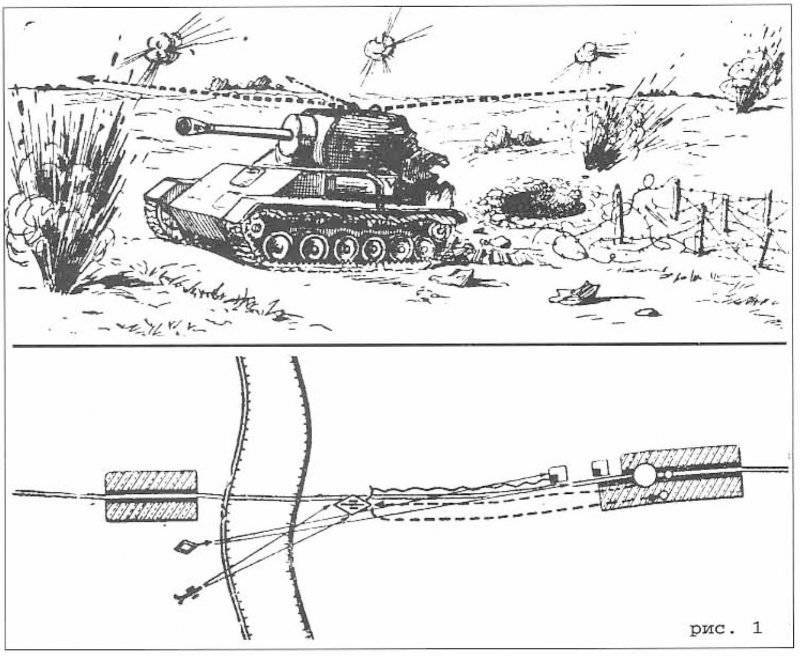 We noticed in the village occupied by the enemy a movement of soldiers. Our battery opened fire on them. At this time, an unforeseen circumstance happened: we, apparently, were noticed by the enemy when we approached the self-propelled unit. The Germans from the left flank opened fire on our observant point from the 37mm gun. The first shells exploded before reaching us. But the next projectile pierced through the front of the self-propelled unit; I reported this to the commander of the battery; he ordered me to leave the point. I had to leave immediately.

Conclusion: Observation point at the reference point, if you have to take, then with great caution. Sharply distinguished local objects can only be used for temporary observation and with extreme caution.

A separate house is always a reference point for the enemy

(According to the foreman Ruban)

In August, 1944, we pursued the enemy north of the city of Tartu (Estonia). Our battery of a fighter-but-anti-tank regiment approached Callauste station (fig. 2) and stopped. The commander of the battery with the commanders of the guns went to reconnaissance of the firing position. My gun was ordered to take up a firing position at 5 m north of a separate house, southwest of the station. 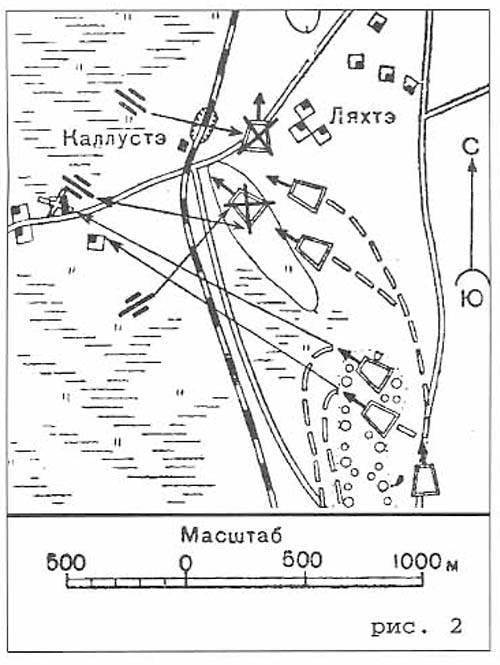 The gun was on the position, we laid out the shells, well entrenched and disguised. There was no infantry ahead; the situation was unclear.

I put a reinforced guard. At about 10 in the morning the observer reported that four “Ferdinands” were moving in our direction. Two of them stopped in the bush, and two continued to move.

The battery is ready for battle. When the Ferdinands were about a kilometer away, the battery opened fire. They stopped in the bush “Ferdinands” fired back. One of them shot at the house. The house was broken, but it could not be set on fire. Then he gave a machine-gun line in the attic. The house was engulfed in flames, the flames reached my cannon. It was impossible to stand near the gun, I had to move away from him. Other guns of our battery repelled the attack, knocking down two Ferdinands, the rest retreated. My gun was not involved in the battle due to the unsuccessfully selected firing position.

(According to Private Konshin)

On September 13, 1944, at the approaches to Riga, the commander of the 45-mm battery of the rifle regiment ordered our calculation to advance on the highway and be ready to repel the attack tanks. The gun commander chose a firing position at the edge of the grove adjacent to the Riga highway. We secretly took a position and camouflaged themselves with pine branches. The observer reported on the approach of enemy tanks. We are prepared for battle. Soon, three Tiger tanks appeared on the road at a distance of 600700 meters from us.

The gun commander waited until they came closer. When the tanks approached the distance 400 m, the gun commander commanded: “At the tanks, at the head armor-piercing, point at the forehead, fire!” (See fig. 3). 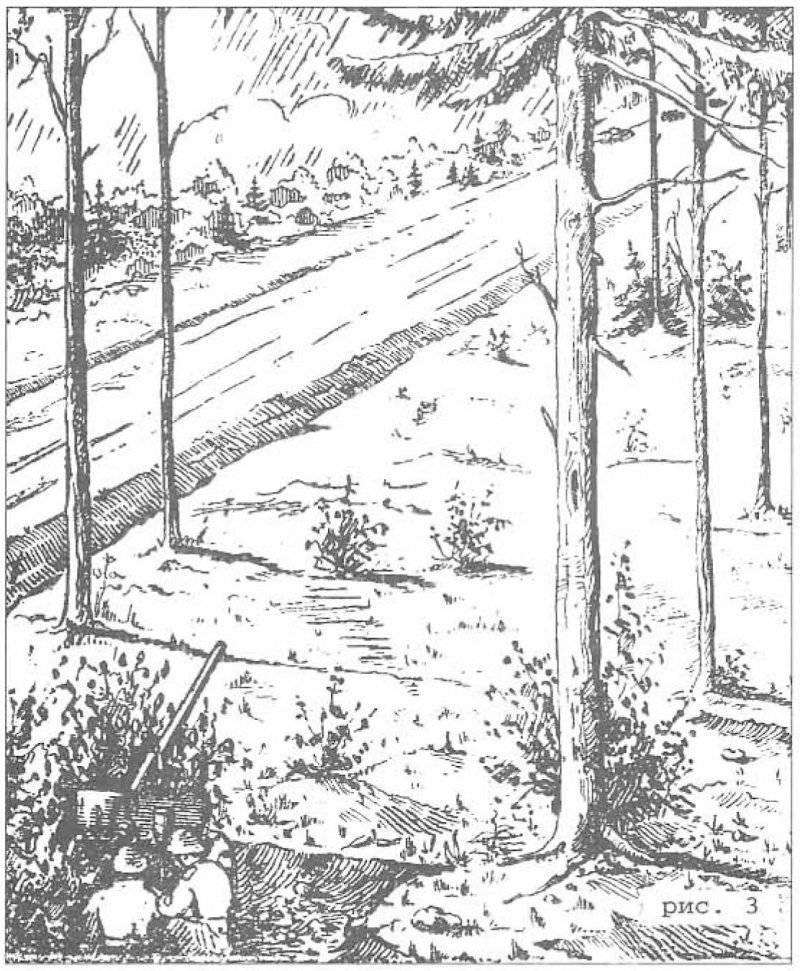 The shell hit the front sheet, but did not pierce the armor. Tanks continued to move. Then the commander commanded: "To direct into the tank track, fire." The shell hit the caterpillar, the tank made a jerk and stopped, the other two turned back.

The downed "Tiger" opened fire on our gun, but at the command of the gun commander the gunner moved the fire at the base of the rotating tower and jammed it with his shell.

Conclusion: Shooting at the frontal armor of the Tigr tank with an armor-piercing projectile from 45-mm guns is not valid.

Fire 45-mm guns at a range not exceeding the range of a direct shot, is valid only when firing at the tracks, on the spell of the tower and on the blinding of the viewing cracks (see fig. 4). 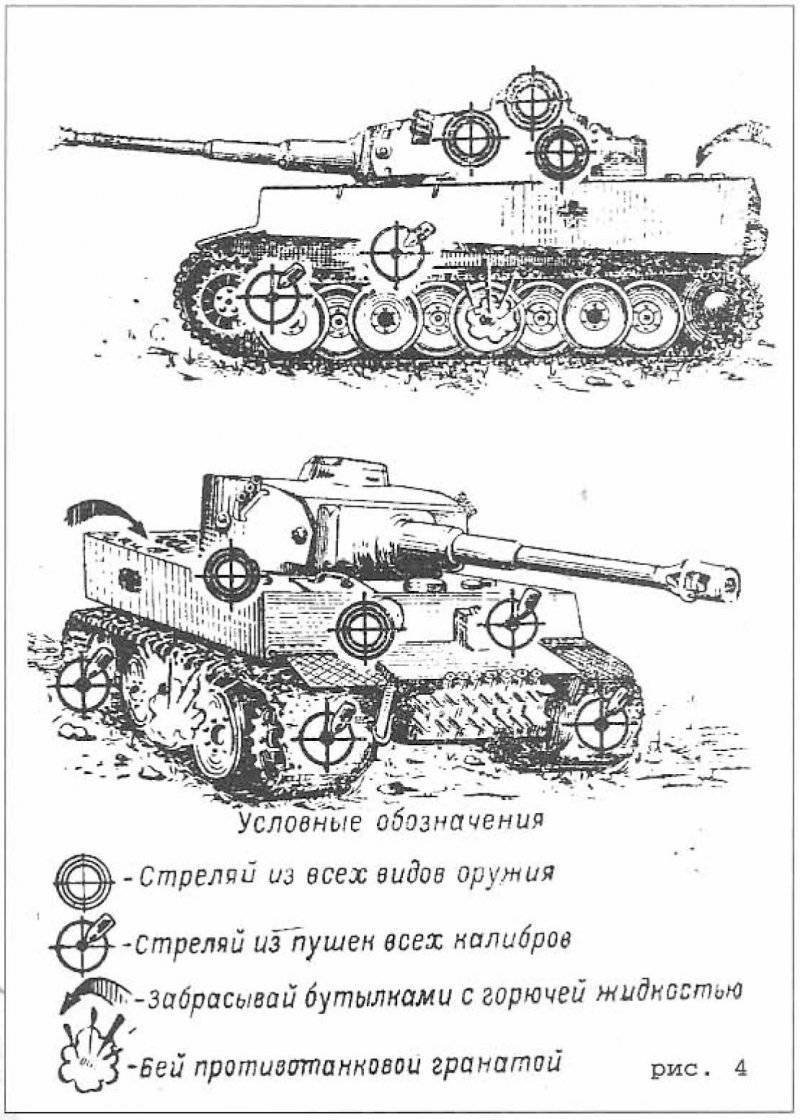 The commander of the gun fired at the tank that had already been shot down correctly, guided by the instructions of the 1945 Fire Rules, which said that they were firing before the tank was brought to a non-operational state.
Ctrl Enter
Noticed a mistake Highlight text and press. Ctrl + Enter
We are
Battleships against batteries of the Red Banner Baltic Fleet squadron operation in the Bierk ArchipelagoAbandoned 19-I battery
21 comment
Information
Dear reader, to leave comments on the publication, you must to register.