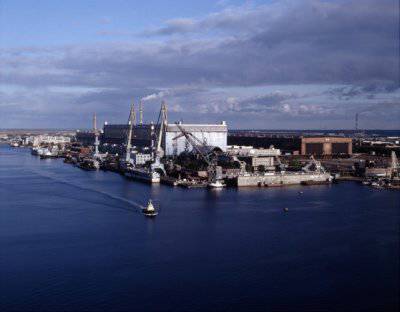 One of the largest Russian defense shipyards, Sevmash, has begun large-scale technical re-equipment, the plant’s press service reported on Monday.


“Sevmash embarked on a large-scale re-equipment. With the support of the state, the production base of the enterprise is planned to be radically upgraded to 2020 of the year, ”the company’s website says.

According to the press service of the plant, re-equipment will help Sevmash to “timely fulfill the state defense order at a qualitatively new level and reduce production costs.”

It is noted that such re-equipment has not been carried out here since the 70-s of the last century. Moreover, within the framework of the already existing federal target programs, machine-building and pipe-processing productions were re-equipped, and crane facilities were partially replaced. There were high-performance universal machines, milling machining centers, new pipe bending machines. There is already a universal stand for testing products for reliability and compliance with vibration-noise characteristics.

“Sevmash will also improve logistics through the purchase of transport systems and replacement of crane equipment in the main industries. Design documentation is being developed for re-equipment of testing, testing, auxiliary and non-metal production, ”the company said.

As for plans for the near future, within the framework of the federal program for the development of civilian marine technology in 2013 and 2014, Sevmash plans to update the laboratory-test base and acoustic complex, to begin re-equipping the corps-welding production.

At the same time, Sevmash is preparing for the installation of the latest press bending, welding, gas cutting machines and equipment.

The plans also include the preparation of additional berths, expanding the technical capabilities of descenders and hydraulic structures.

"This requires large-scale tasks on the implementation of the state defense order," - summed up the company.

OJSC Production Association Northern Machine-Building Enterprise is the largest shipbuilding complex in Russia, the only shipyard in the country whose main task is the construction of nuclear submarines for the Navy. The plant with a territory of more than 300 hectares unites in its structure more than 100 units.

PO Sevmash OJSC is located on the banks of the Nikolsky arm of the Northern Dvina estuary, which has direct access to the White Sea. The official date of commencement of production is 21 December 1939 of the year, the day the first ship was laid - the battleship "Sovetskaya Belarus".

Now the company is building a new generation of nuclear powered ballistic missiles. The lead nuclear submarine missile carrier Yuri Dolgoruky was handed over to the Naval the fleet Russia January 10, 2013. In June 2010, the Severodvinsk submarine cruiser was launched, and in November, the Alexander Nevsky missile carrier. Both submarines are tested at sea.

At the end of December 2012 of the year, the Vladimir Monomakh AIC, which was laid in March 2006 of the year, the Kazan submarine, laid out in July of the 2009 of the year, and the Prince Vladimir AIC, was taken out of the workshop. In the water area of ​​the enterprise, the heavy nuclear missile cruiser “Admiral Nakhimov” of the 11442 project is under repair.

Ctrl Enter
Noticed a mistake Highlight text and press. Ctrl + Enter
We are
Army 2015: Defense SupermarketWorld of Tanks is preparing for a large-scale artillery offensive
10 comments
Information
Dear reader, to leave comments on the publication, you must to register.