Ministry of Defense: Ukraine prevents the renewal of the Black Sea Fleet

April 17 2013
66
The leadership of Ukraine delays the preparation of agreements on updating the Black Sea fleet, a senior official from the Russian Ministry of Defense said on Tuesday. 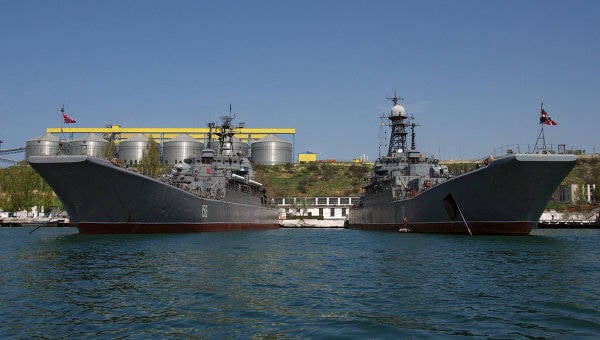 It clarifies the "Interfax", the representative of the Ministry of Defense put the responsibility for delaying negotiations on agreements necessary for the Black Sea Fleet, the Ukrainian side, mentioning the reluctance of Kiev to decide on the abolition of customs duties when importing equipment and goods for the fleet.

Recall, on Friday, the head of the Ministry of Defense of Ukraine, Pavel Lebedev, said that Kiev had offered Moscow a number of joint projects in the field of military-technical cooperation, but had not received an answer on them for two months already. He noted that the issue of the duration of the Black Sea Fleet's stay in Sevastopol was not raised in these proposals.

He also referred to the agreement between Russia and Ukraine on the An-70 aircraft, which, according to him, “is not being fulfilled on the Russian side”. He added that "time will judge us."

On the eve of the Deputy Minister of Defense of Russia Anatoly Antonov said that the department was surprised by the statement of the head of the Ministry of Defense of Ukraine about the prospects for the joint implementation of the project to create a military transport aircraft An-70.

“I recall that the Ministry of Defense of Russia fully fulfilled its financial obligations. At the same time, there are delays in financing from Ukraine. The project is funded by Kiev only 45%, "- said Antonov.
In November, 2012, the Russian Foreign Ministry said that the customs of Ukraine prevents the supply of fuel to the Black Sea Fleet.
October 19, following talks with the Ukrainian Foreign Minister Konstantin Gryshchenko, Russian Foreign Minister Sergei Lavrov said that "there are advances on the Black Sea Fleet, but I would like to speed up the negotiation process."

Ukrainian Foreign Minister Konstantin Grishchenko reported that Kiev and Moscow will soon come to a mutually acceptable decision on the delimitation of the maritime border and the Kerch Strait.

In May, the Sevastopol Regional Administrative Court ruled to recover from the Russian Ministry of Defense tax debt in the amount of 1,3 million hryvnia (more than 5 million rubles).

In April, Moscow offered Ukraine to exempt goods that come to the Crimea in the interests of the Russian Black Sea Fleet division from taxation.

In turn, the ambassador-at-large of the Russian Foreign Ministry, Alexander Bavykin, stated that all cargo “that goes for the Black Sea Fleet today falls in Ukraine under the 20-interest tax. But we have studied Russian legislation and believe that this tax is taken without any legal basis. ”

Ctrl Enter
Noticed oshЫbku Highlight text and press. Ctrl + Enter
We are
Ukrainian authorities prevent the renewal of the Black Sea Fleet’s weapons
66 comments
Information
Dear reader, to leave comments on the publication, you must to register.