"Accidentally at the Russian borders" 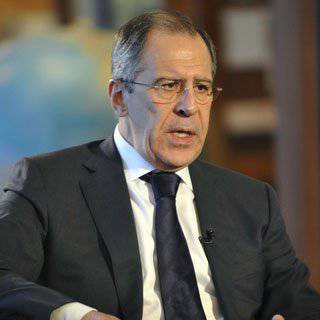 Moscow did not see any signs of US refusal from Euro-PRO, said Russian Foreign Minister Sergei Lavrov. According to him, Washington, by contrast, now intends to deploy its system in three regions, “accidentally” bordering Russia. There were at the head of Russian diplomacy and other claims to the United States.


Russia did not believe in the decision of the United States to partially abandon missile defense in Europe.

“I didn’t hear or see indisputability about this in American statements. They cannot do this, because the US Congress even during the last convocation forbade any changes without consulting the legislators, ”said Sergey Lavrov in an interview with RTVI.

Recall that in March the United States announced its intention to abandon the deployment in Poland of an additional type of interceptor missiles as part of the creation of an European missile defense system, as well as a program to strengthen anti-missile defense before 2017 due to North Korea’s threats. However, according to Lavrov, the new configuration still remains within the framework of the global US missile defense system. Moreover, Washington’s intention to deploy missile defense not only in Europe, but also in the Middle and Far East, only heightens Russia's concern.

“Thus, it is not only the European part of the globe, but three large regions, each of which coincidentally or accidentally lies quite close to the Russian borders. We do not suspect anyone of anything, but, as one great commander said, in military affairs it’s not the intention that is important, but the potential. "Chekhov's gun" is based on the same logic, "he stressed.

According to the minister, Moscow will continue to seek legal guarantees of non-directional missile defense against Russia, since it cannot rely on promises given in words. “When the USSR withdrew its troops from Europe, we were sworn to promise at the highest level that NATO would not spread eastward. Then, when, despite assurances at the highest level, the alliance nevertheless began to expand in this direction, we were again convinced that no substantial combat forces would be permanently stationed on the territory of the new NATO member states. This was even recorded when the Russia-NATO Council was established, ”he recalled.

At the same time, the minister continued, NATO still refuses proposals from Russia to give a clear definition of the concept of “substantial combat forces.” “But we need not only legal guarantees, but an agreed list of criteria, which allows us to verify at each particular stage that these guarantees are being fulfilled and that the development of US missile defense on a global scale is in such a way as to meet the originally stated goal. Namely: to stop rocket threats from outside the Euro-Atlantic region, ”he explained.

"This is our problem."

Touching on other topics of Russian-American relations, Lavrov reaffirmed that the adoption of the Magnitsky Act in the United States was the result of lobbying by the head of the Hermitage capital investment fund, William Browder, illegally enriched in Russia.

“This is a frank anti-Russian action, conceived, as far as can be judged, by people quite sophisticated in politics and undertaken not without the influence of Browder. He most actively lobbied this law on Capitol Hill, and then it rushed around all European countries and proposed “anti-magnet laws” to be adopted in European parliaments, ”the Foreign Minister emphasized.

Speaking about the death of Magnitsky, Lavrov called her a terrible tragedy. “When people die in prisons, this is very bad. But the case with Magnitsky is our problem, ”he added.

At the same time, the minister added that Russia has many complaints against American justice. “There are a lot of complaints about the US judicial system. The same sentences against murderers and rapists of Russian children. Many are released in the courtroom, given suspended sentences for real facts, when irreparable damage is caused to children. At the same time, our citizens are being robbed, Yaroshenko was stolen from Liberia, or illegally taken out of the country, as Bout was taken out of Thailand in violation of Thai laws, ”he recalled.

According to him, both of them were provoked by American agents, who, in fact, "lured them into talking about providing transportation services to someone."

The minister recalled the American authorities and the Guantanamo prison. “The very fact of a prison in Guantanamo is a shame. And the fact that they do not close it is explained openly, without embarrassment, with one motive: “If we transfer them to the USA, we will have no legal grounds for keeping them in prison. Therefore, we keep them without trial. What we want is what we are doing: we are trying, not trying. ” No one checks or controls this prison, ”the minister explained.

Separately, Lavrov touched upon the situation with Russian children adopted by families from the United States. According to him, Moscow admits that the number of incidents with adopted children may be more than what is known to the Russian authorities.

“The fact that such accidents can be much more, says a general analysis of the situation with the adoption in the United States not only Russian, but also any other children, including American ones. After these stories they began to scandalously appear in the press and stir up our public opinion; American citizens and NGOs appealed to the Russian embassy in Washington, telling that they have a family in the state, in the village, in the city, who mocks their children, and everyone sees this. They were interested in whether this was a Russian child, and therefore appealed to the Russian embassy, ​​”Lavrov said.

According to him, 21 is currently aware of the case of bullying Russian children in the United States. “And how many such children we still do not know, since we do not have the opportunity to track down the“ adopted routes ”. This is especially true of what happened in the 90s. Moreover, when adopting a child from Russia, as well as from any other country, in the USA he is given an American name, in all documents he passes under the last name given to him by American parents, ”he added.

Ctrl Enter
Noticed a mistake Highlight text and press. Ctrl + Enter
We are
Global missile defense becomes a leaky umbrellaA great interview with Sergey Lavrov: about Ukraine, Obama and Iran
58 comments
Information
Dear reader, to leave comments on the publication, you must to register.