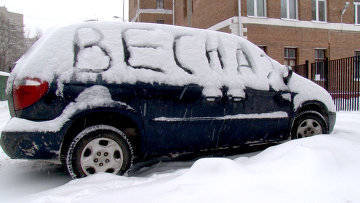 The chill, which this year was presented to us not only by the winter, but also almost the entire month of March, is over. In some regions, March snowfall surpassed January and February combined in intensity. For example, in the Bryansk, Oryol and Kursk regions for several days of abundant rainfall in the cities such snowdrifts arose that even the intensive work of the snow-removal equipment hardly led to a noticeable result.


In connection with the snowfall, many Russian highways turned into snow-covered directions, on which such lengthy traffic jams accumulated that they stretched for dozens of kilometers. "It was" the highway Moscow-Petersburg. The worst situation was observed with drifts in the Novgorod and Tver regions. Lucky for those who managed to stay in roadside motels or near the cafe. But some drivers were forced to remain for several hours in a bare field, blown from all sides by an icy wind. After heavy snowfall from the snow captivity, not only cars, but even heavy trucks, were rescued. The Ministry of Emergency Situations was forced to deploy additional fuel supply, power and heating points on the routes, which saved the lives of hundreds of people. Unfortunately, however, the victims could not be avoided. People died from hypothermia or carbon monoxide poisoning, as they fell asleep in their cars when the engine was turned on.

Many people due to heavy March snowfall for several days were forced to spend at airports waiting for flights. From those people who bought last minute tours to Bali from the tour operatorThere was a lot of time at Moscow airports to study the infrastructure of the Indonesian island well, since the flights were canceled and transferred one by one. Many due to the lingering bad weather even decided to cancel their vacation. But those who waited for departure from the snowy Russia, met a real tropical paradise. Only a few hours of flight and the snow fields and roads were replaced by colorful landscapes with snow-white sea sand.

This March, many experts called the coldest in recent decades. In addition, it turned out to be prolific on various kinds of precipitation. Snowstorms raged in the north and center of the country, and torrential rains poured in the south, raising river levels to critical levels. And today the situation with floods in Russia remains difficult.
Ctrl Enter
Noticed a mistake Highlight text and press. Ctrl + Enter
We are
Motorized rifle brigade unfolding in Bryansk region