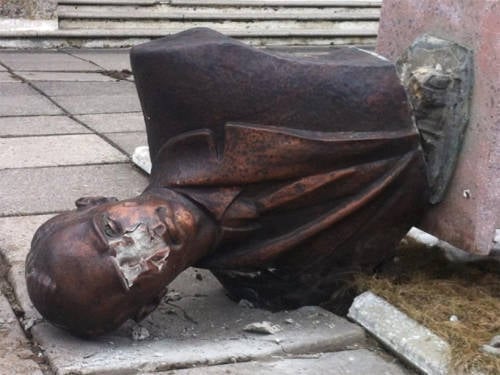 On the night of April 7, in the Lviv region, unknown persons destroyed two monuments to the leaders of the UPA - in the village of Pride in Sambir district and in the city of Morshyn, UNIAN reports.

On the night of April 7, the Stella of Heroes with bas-reliefs of the heroes of OUN-UPA Roman Shukhevych, Yevgeny Konovalets and Stepan Bandera was also destroyed. This was announced by deputy of the Stryi district council of Lviv region Marian Berezdetsky.

"Unknown, apparently - with a big hammer, they broke the Stella of Heroes, which is installed near the Center for the rehabilitation of veterans of the UPA and the repressed Goverla in the city of Morshin," said Berezdetsky.

In the State Department of the Ministry of Internal Affairs of Ukraine in the Lviv region they reported that law enforcement officers were leaving the scene of the incident, all the circumstances of the destruction of the monuments are being investigated.

Ctrl Enter
Noticed a mistake Highlight text and press. Ctrl + Enter
We are
Expert: Petro Poroshenko’s decree on the celebration of the 100 anniversary of the victory of the Ukrainian Sich Riflemen does not correspond to the facts of historical realityResults of anti-terrorist work on Dagestan in April 2014
196 comments
Information
Dear reader, to leave comments on the publication, you must to register.