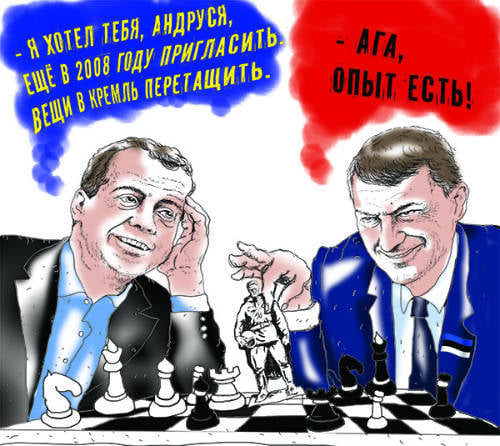 As if nothing had happened, our prime minister talked to his Estonian counterpart.

“Did Dmitry Medvedev really shake Ansip’s hand?”, The well-known Estonian politician and human rights activist Dmitry Klensky asked before the Estonian prime minister visited St. Petersburg. And with this question he expressed the opinion of almost all Russian-speaking Estonia, who was perplexed, like Andrus Ansip, who initiated the barbarian demolition of the Bronze Soldier in Tallinn in 2007, was invited to Russia in general - even if for a multilateral meeting of the heads of government of the Baltic countries dedicated to the ecology of this region .

But Dmitry Medvedev did not just shake Ansip’s hand - he put the Estonian prime minister alongside him at the official photo session of the meeting participants, gave the first speaker among all the speakers, called at the press conference to “deideologize” the relations between Tallinn and Moscow, and finally Ansip was personal audiences.

«Historical the meeting has happened! - the Estonian website DELFI.ee could not resist. “Ansip said he expects Medvedev in Estonia.” “Medvedev knows that he is a welcome guest in Estonia,” the publication quotes the words of the Estonian prime minister himself.

But even on the eve of the opening of the conference, the Estonian delegation doubted that its head would be adopted "one-on-one" by the Russian prime minister. But on the very first day of the conference, Dmitry Medvedev himself assured that the meeting would take place, writes the Estonian edition. And what statements did the Russian prime minister make on the same day at a press conference ...

“I will meet with my Estonian colleague tonight. We looked with Ansip that our trade turnover reaches billions of dollars, which is quite a lot, ”said Medvedev. - If you leave aside ideological differences, then you can give impetus to other relations, for example, economic. I believe that we will do it. ”

At the same time, Medvedev, noted the Estonian edition, did not cause any major obstacles in relations between the two states. Yes, he admitted that the political relations between Estonia and Russia are not the best, and even frozen in some areas. But for some reason, the Russian prime minister called Tallinn’s opposition to the construction of the Nord Stream economic, rather than political, disagreement. The sign of readiness for changes in relations, the Estonian media notes, can be considered that Russia did not criticize Estonia for the fact that in the gymnasium level of Russian schools 60% of subjects should be taught in Estonian.

After such statements at the one-on-one meeting, Medvedev and Ansip talked almost like friends. The Estonian Prime Minister, however, was forced to make one concession - the conversation was in Russian, without translators. But Estonian nationalists, it seems, should forgive this to their premier. Moreover, all the other concessions made only Medvedev.

“Our views on the question of the Narva bridge coincide in the fact that investments need to be made on both sides in order to provide both goods and people with more convenient transportation. If the Russian side considers the border agreement as a condition to start investing, then you need to start with it, ”told DELFI.ee Andrus Ansip after the meeting. Recall the border treaty - already prepared and initialed by the parties - is one of the stumbling blocks in bilateral relations, since the Estonian side wants to refer to the Tartu Peace Treaty of 1920 of the year between the Bolshevik RSFSR and Estonia, according to which Tallinn can claim some territories of modern Russia . In connection with these, I would like to ask Dmitry Medvedev and his advisers for more detailed explanations about the words of Ansip about their readiness to return to the discussion of the border treaty. What is it - Tallinn's willingness to make concessions? Or is it all the readiness of Moscow to sacrifice its territorial interests for the sake of developing “mutually beneficial” relations with Estonia? Agree, in light of the statements made by Medvedev in St. Petersburg, the latter looks much more plausible.

And yet, no matter how significant the unresolved territorial issue is, the Russian prime minister made the most important concession to Estonia when he announced his intention to “de-ideologize” relations with Tallinn. After all, thereby Medvedev actually betrayed our grandfathers and fathers, who did not spare their lives for the sake of victory over Nazi Germany. He also betrayed tens of thousands of Russians in Estonia, who rose to the defense of the Bronze Soldier in April-May of 2007, moreover, on their own impulse, without any appreciable support from the authorities of the Russian Federation.

And it was Andrus Ansip, who headed the then Estonian government, who initiated the demolition of the monument to fallen Soviet soldiers standing in the center of Tallinn. It was Ansip, justifying this decision of the Estonian authorities, who was then telling from TV screens that the Soviet soldiers buried under the monument were not heroes, but “drunkards and marauders”. And now Medvedev shakes hands with this man and promises to “deideologize” bilateral relations! What is this if not a betrayal ?!

How can the leader of a country in general set a goal to develop relations with another country, if the leadership of the latter mocks your heroic ancestors and continues to infringe upon the rights of your compatriots living there? And if we take into account the striking difference in the "weight categories" between these countries, then such a betrayal of the fallen Russians who still live in Estonia looks either betrayal or, excuse me, utter nonsense is one of two things.

Yes, why such an economic article, Dmitry Anatolyevich so deeply preoccupied with the development of economic relations with tiny Estonia. The Russian government, under its strict guidance, does not find the necessary funds for the development of the endangered Far East (and many, many other Russian territories, as well as Russian industries, agriculture, science, education, etc.), but suddenly such concern about Russian-Estonian economic relations. By and large, what can Russia, its citizens, give to the development of relations with Estonia? Even from a purely economic point of view, it is in the interests of Russia to redirect all its exports from the Baltic ports to the Russian harbors as soon as possible. Well, and if you take into account with whom you deal in the person of Ansip and Co., then economic relations with Estonia should be reduced to the minimum necessary.

By the way, the same Americans (from whom, like from the entire “civilized” West, Dmitry Anatolyevich constantly urges “Russians” to take an example) throughout their history have clearly demonstrated that for the sake of any momentary economic benefit they deideologize relations with their partners will not. Let us recall how Reagan punished the “evil empire” with a ban on cooperation with the USSR not only in the field of high technology, but even in the supply of pipes to our country for gas pipelines under construction. Modern Russia still has experienced and is experiencing the same line — and almost unchanged. And what kind of economic noose is now thrown by Western sanctions on Iran?

When necessary, the same Americans and Europeans - even despite undisguised sympathy for gaining monetary gain - are ready to temporarily miscalculate economically, but not to sacrifice their basic geopolitical and ideological attitudes. And how disgusting is the policy of the same Medvedev against this background. Look just a shame.