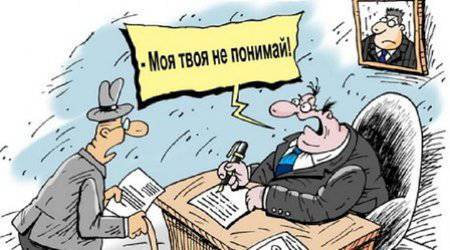 The next news, giving definitely scandalous notes, came from Moldova. This news is connected with the fact that the liberal political forces of the former Soviet republic offered new linguistic games to other legislators and the Moldovan public. Why "new"? Because the previous ones were carried out more than 2 decades ago, and then led to enormous negative consequences, actually pushing together representatives of different ethnic groups living in the country.


These games are connected with the fact that in the bowels of the Liberal Party of the Republic of Moldova a bill was born on the need to introduce the Romanian language as the only official language of the state. All other languages ​​(with the exception of Gagauz in Gagauzia) are actually declared “kitchen”: if you want to speak Russian - for God's sake, speak, but only so that others do not give in to “provocation” to keep the conversation in Russian ...

Moreover, according to the results of the last census in Moldova, about 12% of the population called Russian their native language and another 18% stated that Russian in Moldova is the main language of communication. We must not forget that in Moldavia they understand Russian almost 99% of the population, which cannot be said about Moldovan (Romanian) ...

In addition, about 10% of Moldovans expressed the words that they use the Ukrainian language for their communication. In other words, 40% of Moldovan citizens in the transition of Moldavia to the only officially recognized language - Romanian - will simply lose the opportunity to represent a full-fledged civilian community without simply knowing Romanian.

Here you need to make an additional reservation. Moldovan and Romanian languages ​​today are very similar in many ways, but if you raise the linguistic historythen the present Romanian language, which experts often call the word “Novorumi” younger than Moldovan. The Romanian literary language itself began to actively develop in the 18-19 centuries, when self-identity began to wake up on the banks of the Danube. The language that was in use in the Danube places was a bizarre mixture of late "vulgar" Latin, Germanic dialects and Slavic languages, and the influence of the latter was prevalent. However, the authorities of the designated state decided to declare that they are the direct descendants of the ancient Romans, and their language is some kind of late Latin. As a result, there was an official transition of the language to the Latin alphabet.

At the same time, on the territory of modern Moldova until the end of the 80 of the 20 century, no artificial Romanization of the language was carried out, and therefore the Moldovan language remained more ancient (in terms of age) as compared with Romanian. Only after the reform of 1989, when the Moldovans switched to the Latin alphabet, did the Moldovan language begin to rush towards the Romanian.

Today, these two languages ​​are actually two sides of the same medal (Moldovan is positioned as a dialect of Romanian), and the Moldovan liberals seem to want to make both these parties absolutely identical to each other. It is obvious that the bill itself on the need for Moldova to move exclusively to the Romanian language fits in with the views of the Moldovan liberals that Moldova is the second Romanian state on the map of Europe. At the same time, the liberals, apparently, are not particularly embarrassed by such a historical incident that in those times when Romania as a state did not exist on the map of Europe, Moldova already had this map ... Romania itself as a result of the merging of three territories (Moldavia, Wallachia and Transylvania) appeared only in the second half of the XIX century, and that was due to the fact that the Ottoman Empire fell into decay (not without the help of Russia, by the way). In this regard, it would be more accurate to call Romania the second Moldovan state, rather than Moldova the second Romanian. But then - Moldovan liberals ... For them, historical realities are not important, the main thing is to demonstrate to Europe that they are ready to appear before the Brussels altar. And for this you can call Chisinau, for example, the fourth Rome to name, or rename to Bucharest-2 ...

Representatives of a special circle of readers can say: well, here again twenty-five; some Moldovan deputies are plotting something there, but for some reason they are stuffing us with this information; Well, Moldova is an independent state, let them decide there in what language they should publish news broadcasts and encyclopedias.

That's the way it is ... Moldova is a state and, it is true, independent, and it is up to the citizens to decide for themselves what language is more convenient for them to communicate with each other, teach their children and draw information from the media. But we must not forget that Moldova is positioning itself as a single territorial entity with the Transnistrian Moldavian Republic, in whose territory many Russian citizens live.

Although representatives of the official Chisinau, it seems, do not care about the existence of this population. As a proof of this example, one can present evidence that even the Transdniestrian President Yevgeny Shevchuk is often referred to as the district’s chairman, not recognizing either the fact of his presidency or the will of the citizens of Transnistria, who do not fit in with the wishes of the Moldovan authorities to get Tiraspol under him. At least, Mr. Marinuta, the Acting Minister of Defense of Moldova, spoke of Shevchuk as the chairman of one of the “Moldovan districts”.

So, the proposal of the Liberal Party of Moldova, namely Anna Gu Гуu, about the need to recognize the state language of Moldavia Romanian, obviously, can bring a new confrontation to the banks of the Dniester. If we consider that a considerable number of people reside in the territory of the PMR, in addition to having a Moldovan or Transnistrian passport, also have a passport of Russia or Ukraine, then a peculiar message for Romanization will be interpreted as strong pressure from Romanian unions. Does everybody like this pressure? Of course, someone already had to, but they are obviously not all of the population of Moldova.

The leader of the Moldovan Democrats, who are sometimes willing to support liberal-minded legislators, Dumitriu Diacov, in general, said that such a law cannot be passed, as it does not meet the interests of a certain part of the country's population. His phrase eloquently looks like this:

“We need to deal with serious problems that are worrying all the inhabitants of the country, and not such initiatives.”

Representatives of other political forces (in particular, the Moldovan Communists who won the last parliamentary elections) said that the bill on the romanization of the country's linguistic space, translating into Romanian 80% of the media, textbooks, official documents of Moldova is, first of all, a blow by population. And today, the Moldovan population is by no means unified, and after the implementation of the plans of the Liberal Party, the country may experience a new split, which will inevitably lead to confrontation and, perhaps, bloodshed.

However, such words are obviously not produced by the same Mrs. Gutsu. On all sensations, the Moldovan liberals are looking for any opportunity to demonstrate to the European community their desire to join its ranks at any cost. Apparently, even the high probability of new blood on the banks of the Dniester liberals scares a little. But the statements of Gutsu about the need for the Romanization of Moldova can set fire to a powder keg. Her initiative is fertile ground for those who are ready to play a radical card on the relations between Chisinau and Tiraspol. It is unlikely that the Moldovan liberals do not understand this. And if they understand, then this whole conversation about the fact that any other language, except Romanian, on the territory of Moldova is outlawed, looks more like an unambiguous provocation.

It is quite possible that pro-Western liberals in Chisinau are going to provoke the same residents of Transnistria to a conflict, during which to call for help, for example, the “peacekeeping” NATO contingent - for example, the Kosovo scenario. After all, the fact that Chisinau is not satisfied with the presence of a joint peacekeeping force of the CIS (and Russian peacekeepers, in particular) on the border of the Transdniestrian Moldavian Republic and Moldova has long been known.

By the way, against the background of the public resonance caused by the Moldovan liberals, we cannot lose sight of another extremely significant episode in Moldova. The Moldavian side told Tiraspol about certain agreements with the European Union that special points of “control over migration flows” would be installed on the border of Transnistria and Moldova. At these points, representatives of the Bureau for Migration and Refugees of the Republic of Moldova will scan documents of people moving from Transnistria to Moldova and back. The authorities of the Transnistrian Republic declare that these actions by the Moldovan side are undertaken without agreement with Tiraspol, and express concern that the new system of moving persons may in a repressive way affect Transnistrian Moldovan citizens who also have Ukrainian or Russian passports.

The Minister of Foreign Affairs of the PMR, Nina Shtanski, provided official information to the Military Review:

"More than 30% of PMR citizens are ethnic Russians. Russian citizens are about 180 thousands."
Moreover, about half a million people live in the Pridnestrovian Moldavian Republic.

What is the road going to go further Moldovan authorities? I would not like this road to destabilize the situation in the region.

PS Recently it became known that another citizen of Romania became the representative of the judicial power of Moldova. Now, of the six judges of the Constitutional Court of the Republic of Moldova, five have a Romanian passport ... By the way, this explains a lot ...

Ctrl Enter
Noticed a mistake Highlight text and press. Ctrl + Enter
We are
Moldovan independence: 24 of political uncertaintyNew US Democratic Approach in Moldova: Unite and Conquer
88 comments
Information
Dear reader, to leave comments on the publication, you must to register.