History of Ukraine through the eyes of a Russian schoolboy. Memories 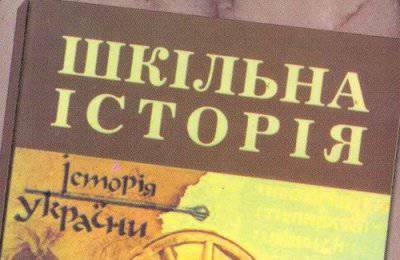 I graduated from school in the South-East of Ukraine (fundamentally not “in Ukraine”, but “in Ukraine”, as “in Tambov”, “in Kamchatka”), in a Russian city. Finished it back in 1996 year. I really liked the school subject историяbut I didn’t like how we were served.


The compilers of the program did everything to prevent me, the Russian, from being proud of their ancestors, but only to be ashamed and repent. Note that this is the middle of the 90-s, Bandera is not yet a hero of Ukraine, but already nauseated by the presentation of the material. I am afraid to think about how the modern scholars in Ukraine brainwash.

I remember that in the school library, the book “The History of the Romanov Family” in Ukrainian caught my eye. Even in the preface it was written that all the Romanovs were terrible tyrants, alcoholics and libertines (I can not vouch for the accuracy of the quotation, but I conveyed the meaning for sure). My children's brain just exploded from contradictions: on the one hand, how drunks and perverts built such a large country, and on the other, “recommended by the Ministry of Education”. At that time I simply did not know that this institution was occupied by the ideological descendants of Mazepa, Bandera and Shukhevych.

Oh, these wonderful lessons of history! We have textbooks on this subject changed EVERY YEAR. Do you think that the Soviet people won the Great Patriotic War? You are mistaken. And not even Western allies. It was Ukraine who defeated the fascists, well, or at least did not allow the Barbarossa plan to materialize. It was explained to us that 22 July 1942, the city of Sverdlovsk (now Lugansk region), was the last defense stronghold in our country (Ukraine), which thwarted all the plans for the Blitzkrieg to the Germans. And then, the Muscovites finished off already exhausted and exhausted enemies. If we proceed from this logic, then Turkmenistan should be given the title “hero-country”. Imagine the Turkmen warriors are so good that the invaders were not allowed a few thousand kilometers before their homeland.

In Ukraine, every student knows who Valuev is. No, this is not the Valuev, who will be appointed ambassador to Kiev, if Klitschko becomes president. Valuev, the tsarist minister, said: "There was no Ukrainian language, there is not and cannot be." I remember, even I, a Russian man, was outraged by such arrogance. By the way, this phrase, showing the true attitude of the “damned invaders” to Ukraine, is known to everyone who has finished school there. But then it turned out that he said: the very question of the benefits and possibilities of using this adverb in schools is not only not resolved, but even the initiation of this question is accepted by the majority of Little Russians with indignation, often expressed in the press. They very thoroughly prove that there was no special Malorussian language, there is no and cannot be, and that their adverb, used by the common people, is the same Russian language, only spoiled by the influence of Poland; that the all-Russian language is as understandable for Little Russians as it is for Great Russians, and even much clearer than the so-called Ukrainian language, which is now composed for them by some Little Russians and especially Poles. The faces of that circle, which is being strengthened to prove the opposite, are blamed by the majority of the Little Russians themselves for separatist designs hostile to Russia and disastrous for Little Russia (excerpt).
Agree, this is, as they say in Odessa, two big differences.

I remember in class we were told that at the beginning of the 20th century there were circles in Austrian Galicia, which could be divided into Austrofiles and Russophiles. The former linked their future with Austria and the entire progressive world — the European integrators, in a word, and the latter, respectively, were “for the Muscovites”. And for some reason, the teacher did not tell us about their further fate - not about the Ukrainian Austrian firms that killed the Russophiles (Russians), or about the first European concentration camps - Talerhof and Terezin.

I remember the class in 9, read the interview of one OUN. He, poor, all lamented that half of the emigrants to America from western Ukraine at the beginning of the 20th century called themselves Russians. Based on this, I began to prove to the teacher of the Ukrainian language that at that time in Galicia half of the population considered themselves Russian, but for some reason did not declare it openly. I could not prove, because it had to be done on the move.

An interesting view of the official Kiev Zaporizhzhya Cossacks. They hammered into young heads that the Cossacks were a sort of fighters for the Ukrainian land and its population. But then it turned out that Zaporizhzhya Cossacks lived as a predatory gang, they were not picky about their connections — they could go to Moscow with the Poles, they could stand up with the Crimeans against Poland. The same Crimean Tatars, it turns out, were much more decent - they did not attack the one-faith Turkey, and it’s all the same to steal slavery into slavery. We are Russian, Polish, Ukrainians are all wrong. We, probably, were not distinguished at all.

Interesting reasons for the constant uprisings of the Cossacks against Poland in the XVI - XVII centuries. Their main goal was to get into the registry, i.e. getting banal salary from Poles. A sort of extortionists - we will fight with you until you give money. It is significant that after the liquidation of the Sich, the Cossacks moved closer to the ever-recalcitrant Caucasus. They were given land, they were given maintenance, and they turned into the Black Sea Cossack army, and then the Kuban army. They became quite happy with their fate and never rebelled against the Russian tsars.

I remember that we guys were very interested, as we called them, “Polish Ninjas”. Let me explain: as a rule, at the end of almost any anti-Polish Cossack uprising, when the guardians of the Ukrainian land began to lose to regular troops, suddenly "the top of the uprising was seized and executed after cruel torture." We were amazed: how can one steal the entire leadership of the uprising in the middle of a guarded camp, and why it could not be done at the beginning of the unrest. The answer I received much later was simple - the Cossacks themselves betrayed their commanders in order to receive forgiveness. These are the brave and brave defenders of the motherland.

My friend studied at the Ukrainian military school. The teachers there made a surprising discovery: it turns out that the role of Nakhimov in defeating the Turkish fleet greatly exaggerated - it turns out that almost all the work was done, yes - yes, the Cossacks. They on their boats - seagulls "udaydakali" all the ships of the enemy, and ours were so, for extras. Even the ancient descendants of Ukrainians - ukry, known to us as Atlanteans, built the Egyptian pyramids, and they themselves came from Venus, and the oldest, the original language was Ukrainian.

Jesus Christ was a Ukrainian, according to another version, he studied in western Ukraine in his youth, and later the Jews misrepresented the whole truth about him. Understand that all his virtues would not have manifested, if he did not know the “shchiroy” of the Ukrainian soul.

When we passed the Great Patriotic War, we were surprised to learn that the OUN-UPA, like real patriots, fought not only with the German, but also the Russian invaders. And my grandfather told me that his part was removed from the front several times in order to calm down Bendera. They, in the Soviet rear, see, with German nedobitkami understood. Father was very indignant at the fact that they distracted the Soviet forces in the situation when they had every day on the account. Crematoriums in concentration camps worked for wear until the approach of our advanced units; retreating, the Germans destroyed the cities and villages along with their inhabitants. It turns out, Bandera accomplices of many murders (in addition to their own hand-on reprisals against Jews, Poles, Russians).

I remember in the textbook about OUN and others like them more was written than about the Soviet partisans. Again, I finished school in the 1996 year, and Bandera was not a hero yet. How and what was taught under Yushchenko, even scary to think.

My friend in Ukraine has a son Maxim. He, a Russian lad, goes to the Ukrainian school (not to get into Russian, there are few of them and, you know, to get there dearly) and bilingualism prevents him from learning - at home they speak Russian, and at school everything is “move”. He, my friend, is thinking of moving to Tula, to his brother. By the way, my class is easier and more convenient to arrange a meeting of graduates in Moscow, and not at home - almost everyone who has a head on his shoulders has long been in Russia. Runs, runs a Russian man from Ukraine. Runs from lack of money, from the lack of prospects, and most importantly, from the aggressive "Ukrainians".

So, about the Ukrainian schoolchildren. They inculcated "Svidomo" and cave Russophobia. Understand, brainwashing in Ukrainian schools is capital, and at the output we will receive ideological enemies, reborn people with altered consciousness.

It is extremely important to conduct counter-propaganda among the Ukrainian youth (I touched on this topic in the article “Why Russia should remain Orthodox”), distribute Russian patriotic literature, shoot high-quality historical films, such as “We are from the Future-2”, “Match”. Tell me, somehow financially encourage the authors of the project. "500 seconds of truth about Ukraine"?

"The map of the Pole" is a very smart move of Warsaw. Where is the Russian map? Kyrgyz is much easier to obtain Russian citizenship than a resident of Ukraine. In order for a “nezalezhnoy” citizen to get a passport with a double-headed eagle, he must wait seven or eight and during this time lay out money, waste time and nerves.

Russia's policy towards the Russian-speaking population of Ukraine is fundamentally wrong. We should not tie together the political course of Kiev and the attitude towards the Russian people of this country. What, strongly pro-Russian sentiment in Georgia intensified in the 2006 year after the deportation of Georgians from Russia?

Ctrl Enter
Noticed oshЫbku Highlight text and press. Ctrl + Enter
We are
About Stalin and KhrushchevWhat you didn't want to know about England
Military Reviewin Yandex News
Military Reviewin Google News
235 comments
Information
Dear reader, to leave comments on the publication, you must to register.