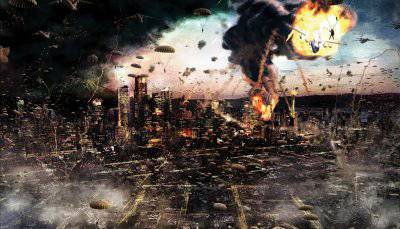 The hegemonic aspirations of the United States gave rise to strong anxiety and a large increase in anti-American sentiment in the public in different countries. Over time, with the continuation and strengthening of this course of American oligarchy, anti-Americanism may acquire other, more specific forms of coalition cooperation of individual states aimed against the United States imposing its rule over the peoples. This pattern of international relations was already clearly manifested in the three world wars of the twentieth century - in two “hot” (against Germany) and one cold (against Soviet messianic expansion). According to authoritative analysts of international relations, nowadays, as a result of the policy of global domination of the United States, humanity is already on the verge of a fourth world war.


In the US, there are healthy circles (although very marginal), who see a great danger and riskiness of the hegemonistic policy of Washington for their own country and for the whole world. This policy was sharply criticized by Professor Chalmers Johnson in his book “Strike Back: The Price and Effects of the Creation of the American Empire.” He expressed his vision of US imperial policy in the pages of the German magazine Spiegel: “Arrogance always precedes a fall. Of stories we know that world empires sooner or later reach a critical stage. America is impudent, arrogant, self-confident ... What killed the Soviet Union was imperial overstrain, not competition with the United States or the inability to reform. Americans think they are immune to what befell the Russians. It's a delusion...".

And in Europe, the US dominance policy is increasingly facing resistance and harsh criticism. Especially since, as noted by the American analyst Charles Kapchen, "America and Europe essentially belong to different political cultures."

The Bush doctrine was perceived by many European politicians and experts with great concern. French political scientist Ramone wrote: “The new US doctrine again imposes the right to a preventive war, to which Hitler Germany referred in 1941 already in the attack on the Soviet Union and Japan in 1942 in the attack on the USA”. Prominent German political scientist Jürgen Habermas called what is behind the Bush doctrine, "imperial liberalism."

For the first time since 1949, a split line has been laid between the United States and its NATO partners as a result of American aggression against Iraq on fundamental issues of international politics. In the press organ of the German Bundestag, we read: “The Iraq war has plunged the Western Union into a deep crisis. Opinions differed on the structure of international order. When studying European publications related to this issue, one gets the impression that one has to choose between pluralistic order and hegemony. Europeans want a pluralistic order, that is, the rule of law and recognition of the primacy of the United Nations. Hegemony — this is what the United States is pursuing under the current Bush administration — a kind of institutionalized form of American domination. ”

The war against Iraq even gave rise to a temporary common interests of France, Germany and Russia, led to the first serious crisis and a split in NATO and the EU. Professor Bogaturov rightly pointed out in this connection: “The ambiguous American-British“ victory over Iraq ”did not introduce into international relations a sense of security and peace, but a disturbing atmosphere of a sultry lull on the eve of the storm and crisis.” One cannot but agree with this conclusion.

Apparently, the era of US domination in Europe is gradually nearing its end. It can be replaced by the era of "Europeanization of Europe." This trend is objective. For Europe, there is no longer any military threat. It is in their interest to overcome the current crisis of the EU, to crown European integration with success, to adopt the Constitution of the European Union as the main law of a peaceful hostel and cooperation in Europe and not to get involved in an arms race and global military adventures of the United States. The Financial Times editor Quentin Peel wrote in the influential German journal Internationale Politik: “Europeans must decide whether their role in the world should be reduced to support on a case-by-case basis of American hegemony, without being able to make a big impact on as the only remaining superpower rival. ”

Among Western analysts, there is an opinion that the US ruling elite will not back down in their military obsession from unleashing even a world war, considering it to be the surest way to quickly and unconditionally achieve global domination through a blitzkrieg based on the use of high technologies. Some analysts are even inclined to believe that as a result of the escalation of the military-political escalation of the United States, a new world war threatens humanity. Others even speak in the sense that, given the increasing military escalation of the United States (Yugoslavia, Afghanistan, Iraq, military threats to Iran, Cuba, Pakistan, North Korea and other states, the massacre of sovereign North African countries like Egypt and Libya, attempts to subjugate Syria) , it has become a fact. French philosopher Jean Baudrilar states: "The fourth world war is already underway."

These assessments of US policy largely coincide with the ideas of Karl Müller’s article “NATO Goes to War, and Everyone Should March Together,” published in the Swiss newspaper Zeit-Fragen 11 in July 2012. In connection with the overwhelming US forces in pursuing a policy of domination, Mueller, they are making great efforts to harness as many as possible countries, including neutral countries, even Switzerland, in addition to the American satellites in NATO, and to use their economic resources and troops to fulfill their strategic objectives. Developed in Washington.

To achieve these goals, it is planned to attract as many international organizations as possible. “During the NATO Summit in Chicago 20 and 21 in May 2012,” writes K. Muller, “it was decided how this military alliance should be expanded in the coming years: not only with a large increase in the number of its members and contrary to international law using international organizations such as the UN and the OSCE, but also conducting joint military operations with countries that are not yet members of the bloc, including with neutral countries. At the same time, the USA as the dominant power of NATO seeks above all to be able to wage several major wars in various theaters of the world at the same time in the current economic difficulties. Probably not only more wars, but also more destructive wars than in the past 20 years. ”

One cannot ignore the widespread opinion in the West that the thesis on the fight against “international terrorism” is just a convenient excuse for a war against the victims of its “aggressive ambitions” chosen arbitrarily by the US government, that terrorism is a reaction to the “cruel use of American power”. everywhere in the world. "

In September 2003, the German Chancellor Schröder ordered the Allensbach Institute for the Study of Public Opinion to test how the German population sees relations between the United States and Europe. The results of the study were stunning. Three-quarters of the respondents were in favor of Europe pursuing an independent policy in accordance with its own interests.

In the Russian political science literature, a special place in the criticism of the expansionist course of the United States is taken by the book by K. Brutenz “The Decline of American Hegemony”. The author has traced the evolution of US policy from ambitious plans to establish the American unipolar world before the crisis that gripped this policy with increasing intensity since the end of the Bush presidency. He describes the US policy as “superpower”. This is a focus on over-weapons, exaggeration of the role of the military factor and military superiority in international relations; the desire to ensure absolute security for themselves, while ignoring the interests and concerns of other countries; ideological messianism, the desire everywhere to impose their world view, their way of life; hegemonic approach to international life; readiness and even a tendency to resort to force along with a claim to the planetary nature of their interests and the right to military intervention in the internal life of any state, and so on.

But, as it turned out, the assertion of his hegemony in the world was beyond the power of the American elite. K. Brutents writes about the impending decline of American hegemony as a result of the "imperial overstrain" of US forces. Moreover, in contrast to the plans to create Rakh Americana - the American empire, with cynical frankness adopted by Bush’s cowboy policy, the “New European Age Project” appeared, which reflects the aspirations of Europeans, who are still poorly decorated, to free themselves from American hegemony and their “ Atlantic "henchmen in government circles of European countries.

As a result of the influence of American politics on the countries of Europe, as well as on Russia, “the danger of cultural and spiritual savagery, educational degradation, erosion of civilizational diversity of nations” arose, the “lack of spirituality, its washing out of money chasing”, business, mass culture ", the displacement of morality and morality of politics and life. The imposition of these “anti-civilization values”, according to Brutents, is accompanied by a “rollback from the social science postulating that social life, development, history has its own laws”. The function of social science is fulfilled by the primitive market ideology that the United States seeks to introduce everywhere, in order to make it more stupid for the peoples, to impose their domination on them. The US political practice has included deception of public opinion, lies, provocations, bribes, economic sabotage, subversive actions, the conduct of terrorist acts and state coups by special services.

“In the destructive processes in the Russian economy,” writes Brutents, “the United States played the most active role through the dictates of the IMF, the World Bank, and the activities of foreign, mainly American advisers, who had immense influence in higher economic structures ... With good reason to assert that the responsibility for the “reforms” and their consequences lies not only on E. Gaidar, A. Chubais and other destroyers of the Russian Land, but equally on the administration of the United States. ”

K. Brutents recalls that shortly after the end of the Cold War, former German Chancellor Helmut Schmidt during one of the international meetings told him: "The 21st century will be the most dangerous since the birth of Christ." Indeed, in order to survive, mankind must eliminate the main threat to its existence - the policy of domination over nations, which, as history shows, leads to a world war. Otherwise, an apocalypse awaits him. Will the ruling circles of the United States and their "allies" listen to the voice of the public, or will they look for a salvation from the deep crisis that hit the Western system and its values ​​in a war?

Ctrl Enter
Noticed oshЫbku Highlight text and press. Ctrl + Enter
We are
"The politics of domination: from the XX to the XXI century"The fourth world war and its historical features
Military Reviewin Yandex News
Military Reviewin Google News
41 comment
Information
Dear reader, to leave comments on the publication, you must to register.