Under the "convenient" flag. How the Russian fleet collapsed 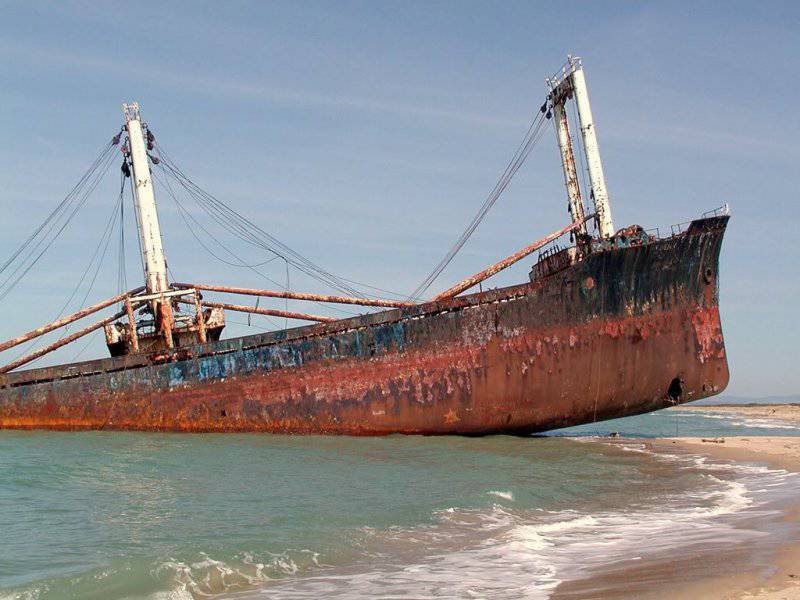 In the late seventies, when I saw a vessel moored in the port, I asked my father, a seasoned sailor, why the ship looked so untidy. “Yes, this is a“ Greek ”, they are always so rusty and dirty,” he heard back. Today a similar question seems inappropriate. Now pretty often the ships, on which our sailors are still daring to sail, look exactly the same.


In the Soviet years, the fleet numbered around 1300 ships in its best times, firmly holding the honorable third place in the world. At that time, our sailors earned much-needed currency for the country, transported goods for the national economy inside the country: delivery by water was and remains the cheapest of all possible types of transportation. In addition, the merchant fleet has always been considered as a mobilization reserve - at “X hour” its ships were to carry military cargo, manpower and equipment. Our sailors were the "face of the country", one of the most highly paid groups of Soviet society. In addition, they always had the opportunity to benefit from the sale of consumer goods “brought from abroad”. They were even considered as a kind of elite. Moreover, representatives of the "elite" in foreign ports went ashore only three times - to look after each other.

Of course, there were disadvantages. At some stage, the crews of the Soviet courts were swollen to such unbelievable proportions that some of the most of the voyage simply hung around. This applied, for example, to electricians, most of whom only needed to replace the blown bulb.

At the same time, today our liberals call allegations about the power of Soviet trade fleet nothing more than a "myth", and all achievements are only the fruit of the "ruthless exploitation of ships and people", saying that "the ugly brainchild of an ugly economy lived in a greenhouse." “Exploitation” does not fit very closely with life in the “greenhouse,” but critics do not bother with logic.

Everything changed dramatically in the late eighties: the sailors decided that they were underpaid, and therefore it is worth only allowing them to work on the ships of foreign companies, how their salaries will grow and “there will be more freedom”.

They were assiduously assured by their foreign colleagues, who sometimes even staged demonstrative strikes, supporting the demands of the Russian seamen for raising their salaries. However, the reality, as always, turned out to be completely not as wonderful as it was seen from afar.

The division of the pie, inherited from Soviet times, has brought many surprises. A rich inheritance in the form of large, subordinate to the Ministry of economic associations - shipping companies was in the hands of several hundred companies. Each of them became the full owner of its “fleet”, sometimes consisting of one or two ships, redeemed from the state at a bargain price. Of course, not all new owners were trying to quickly resell a pretty hot commodity. In most cases, the operation of the ships continued. However, the basic principle of free enterprise - profit maximization - quickly made itself felt. The ships didn’t undergo repairs for a long time, at first it seemed like it was better - already this procedure took too much precious time in Soviet times, sometimes for several months. During this time, it was possible to make several trips abroad and bring a lot of money at that time. But then, when they began to refuse mechanisms, and the ships were turning into old vessels, on which it was simply unsafe to sail, many became thoughtful.

In the old days, merchant ships had their own lifespan - on average, it was 25-30 years. After receiving a new ship, and the old sold, as is customary now to say, "on pins and needles." Now it is impossible to force the majority of shipowners to part with their offspring - there is no money for new ones.

And then there was the collapse of the shipbuilding industry. So the rusty overgrown “samotopes” of the construction of the end of the 1950-s go to sea.
Salary has increased, instead of two hundred dollars that a sailor received in Soviet times, now he is paid several times more, but the general increase in prices quickly leveled the increase. In addition, today it is often necessary to demand what was earned through the court, waiting for a long time for its decision. This “process” began in the nineties, it is still alive today. The state had and still has legal levers in order to force the owners to maintain the floating property they inherited in a relative order, but the owners very quickly found a way out. It is about changing the flag, most often - Liberia, Greece, Panama and Honduras. She tried to attract Russian shipowners and North Korea, but established, in their opinion, too strict rules for those who want to go under her flag.

The reason for the "color change" is elementary. In these countries, the standards for ensuring the safety of navigation are much more liberal than most other members of the world community. And for not very big money you can raise the flag of one of these countries on your ship. Which, in turn, earn decent money for their budget.

This procedure is referred to as the “flag of convenience”. For example, in Panama, for the registration of a ship you need only five documents and only one working day.

At least one of these documents looks strange - you should bring proof that the person who wants to register the vessel is its owner. Certain obligations impose and the need to have a representative in the country. But in return, the shipowner receives “prizes”: the possibility of registering his floating property regardless of age, exemption from all taxes on income received from international maritime trade, and, moreover, as a bonus, and low payroll taxes to the crew. In general, pay money, go to sea - and do what you want. Our liberals put this practice as an example, asserting that this is the way to do business. And in Russia, they say, there are no conditions for this. Let me remind you that according to the provisions of our legislation, only an application for registration of a ship should be considered a month, plus only citizens of Russia can submit it, whereas in Panama there are no such restrictions. As they say, feel the difference.

Apparently, therefore, our largest shipping company, Sovkomflot, prefers to have foreign-built ships, and not under its own flag. Evidence of this is the Anatoly Kolodkin supertanker launched in South Korea in January 2013, attributed to the port of Monrovia - the capital of Liberia, one of the countries trading its flag trade.

Some of the domestic sailors do not see anything wrong in that. In their opinion, it is possible to re-register at least several times a month, depending on which flag it is more convenient to carry out this or that transportation.

But the obvious misfortune is that low security requirements cause a cause of accidents and catastrophes from time to time. It’s not for nothing that when analyzing the causes of incidents at sea, the factor of the “convenient flag” was carried out by Soviet experts into a separate column.

A simple example. Now the expanses of the seas plow a lot of boats, which were originally destined to move only along rivers, or not too far from the sea coast - for their classification the term “river-sea” was adopted. It is clear that the Russian registry did not give permission for their access to the sea. However, the decision is ridiculously simple: in the area of ​​the superstructure the height of the board increases due to the welding of additional sheets. After that, a “flag of convenience” is raised on the ship, and that’s all. And who cares that these “paper boats” due to low precipitation and modest size simply cannot cope with even a little excitement that the captains need every time to make maximum efforts so that the fragile ship will not be stranded even by not too strong wind or over.

All this was vividly demonstrated by the events in the Kerch Strait in the late autumn of 2007. Then, in two days, seven ships went to the bottom at once, all of which were exactly the same river-sea type, most of which were decrepit "old men." Many may argue: they say, such severe weather conditions have not been in the shallow Kerch Strait for a long time. But after all with larger vessels, being then in the same water area, nothing of the kind happened.

One more thing. In Russia, for most enterprises, the issue of wage arrears has long ceased to exist, but this problem remains for the sailors.


A part of the courts is formally owned by foreign companies; they are not interested not only in the working and living conditions of the personnel, they leave their property to the mercy of fate when financial troubles arise.

Well, since they are foreign, they are not accountable to our regulatory authorities. No one will name the exact number of incidents in which our sailors were taken hostage by financial companies.

The following case is typical: on arrival at a foreign port, a Russian crew learns that their ship is under arrest because of the owner’s debts. Often we are talking about the "captivity" lasting several months. In the "totalitarian past," no one could have imagined the detention of a Soviet ship in a foreign port; all the mechanisms, starting from the Foreign Ministry and ending with the special services, would immediately be set in motion. Now, these tricks allow themselves not even very developed states.

The marine business has remained among the few industries in which it is still possible to create whatever pleases. And, formally listed as a Russian citizen, do not bring the slightest benefit to their homeland. I will share my predictions: the current situation will soon attract the attention of the country's leadership. Indeed, in the very “hour X” the old ships will be unsuitable for use as auxiliary fleet.

And shipowners who have a relatively young fleet, but operating under the “convenient flag” will find a thousand and one reasons to avoid executing orders of the country's leadership.

Have a fleet in such a state is not to face a great power. Of course, it is unlikely that it will be possible to recreate the old system of shipping companies that were under strict control of Moscow, but it is possible and necessary to take measures to return at least some of the vessels under the Russian flag. You can and should also introduce legal restrictions on the ownership of foreigners or even Russian citizens permanently residing abroad, the courts of the Russian fleet. For the fleet was and remains a strategically important industry.