The United States will continue to fund the development of MEADS 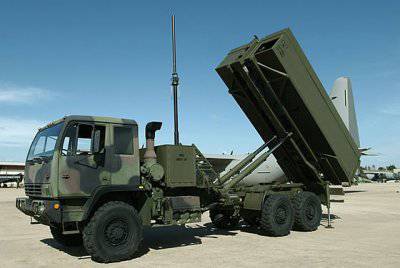 The US Congress agreed to continue funding the development program of the medium-range air defense system MEADS (Medium Extended Air Defense System), which is being implemented jointly with Italy and Germany.


As reported by Reuters, Congress approved a bill guaranteeing the allocation of 984 billion dollars to cover the current financial needs of the country up to September 30 this year. (until the end of the current fiscal year).

This bill provides for the allocation of 380 million dollars to the MEADS program, which will allow to complete the development and demonstration stage of the complex, as well as to avoid cancellation of contracts and negative consequences on an international scale.

According to Lockheed Martin spokesman Cheryl Ameriman, the resolution to continue funding public spending, adopted by the US Congress, includes funding for the last year of the MEADS complex.

The system is developed by a joint venture MEADS International, which includes the Italian division of MBDA, the German LFK and the American Lockheed Martin. The development, production and support of the air defense missile system is managed by the NATO-created organization NAMEADSMO (NATO Medium Extended Air Defense System).

Earlier, in February 2011, the US Department of Defense announced that it intends to stop financing the MEADS project after graduating from FN 2013. stage of development and demonstration of the complex due to lack of necessary funds. However, at the end of last year, the US Congress decided to abandon funding in FN 2013. MEADS program, arguing that the US Department of Defense does not intend to adopt it. Despite the appeal of President B. Obama and the leadership of the Pentagon, the defense budget for the 2013 f.g. 400,8 million was not included in the program’s funding for its final year.

Recently, the US Department of Defense, representatives of Germany, Italy and Lockheed Martin put pressure on lawmakers, stating that the termination of funding for the project could lead to complications in relations between official Washington and its allies, leading to loss of results of the project, which already spent about 4 billion dollars, as well as paying large sums to contractors as penalties.

According to representatives of the US Department of Defense, the approved completion of the development of MEADS will allow the US defense department to use the technologies created within the project in the implementation of advanced weapons systems development programs.

Lockheed Martin and the MEADS consortium plan to conduct further tests of the MEADS system in the fourth quarter of 2013 in order to test its capabilities to intercept ballistic missiles. The leadership of Lockheed Martin, for its part, intends to continue to cooperate with Italy and Germany in the framework of the program, even if the US administration refuses to continue to participate in it.

According to Sh. Amerin, the air defense system / PRO MEADS is much cheaper to operate than the Patriot air defense missile system manufactured by Raytheon, and provides cover for a much larger zone.

The company "Reyteon", in turn, continues to improve and modernize the air defense system "Patriot".

Ctrl Enter
Noticed a mistake Highlight text and press. Ctrl + Enter
We are
Russia firmly occupies a place in the global arms market 2 and will maintain its position in the foreseeable future.Armored Vehicles Market in the Middle East in 2005-2012 and forecast for 2013-2016
23 comments
Information
Dear reader, to leave comments on the publication, you must to register.