To reach the EEC, or what will be the boundaries of the Eurasian Economic Union?

April 2 2013
276
Representatives of the Customs Union of Russia, Kazakhstan and Belarus announced that by the autumn of next year, an agreement on the creation of a Eurasian Union, which would become the final model of economic integration, could be signed by all three parties. The transitional elements of this integration today are the Customs Union and the Common Economic Space. The main innovations of the entry of countries into the Eurasian Economic Union are not only single tariffs and technical regulations, but also a single banking system together with a single currency and common labor legislation. The plan for the creation of the Union is planned to submit by this summer. 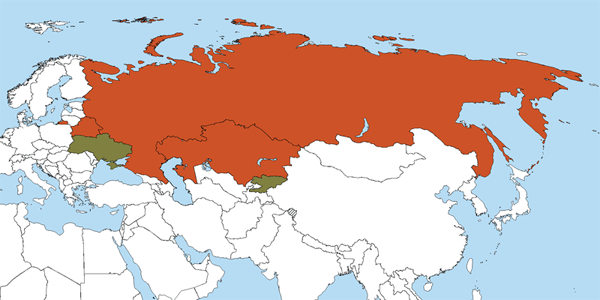 And if with technical regulations and tariffs everything can be settled quite quickly, although today Belarus and Kazakhstan, unlike Russia, are not members of the World Trade Organization, then with the introduction of a single union currency, certain problems may arise. Today, each of the countries of the Customs Union has its own currency. These currencies can be represented in the following ratio: the Russian ruble is equal to 279,4 Belarusian rubles and equal to 4,85 Kazakh tenge. However, the difficulties here are not at all in the exchange rate for each other. The main difficulty lies in the fact that at least two states will have to abandon their national currencies and move to a new monetary unit for trading.

Russian economists argue that in the present conditions it would be advisable not to invent a certain new currency unit for the three states, but to switch to using the Russian ruble. At the same time, Russia could “share” emission centers. One of the additional ones could have been located in Minsk or Astana, which would have allowed them to dismiss claims to Russia.

Such claims, by the way, appear now. Nationalist forces in Kazakhstan are trying to do everything to prevent the integration of the republic with Russia. One of the arguments, according to which Kazakhstan should not enter into close integration with the Russian Federation, is the judgment that Russia is going to seize the entire economy of Kazakhstan along with its successes of recent years. However, these pseudo-economic concerns do not hold water. The idea of ​​creating the Eurasian Economic Union is based on the creation of a single banking system, which will become an effective regulator so that no one in the Union starts dragging the blanket over himself. Market mechanisms simply will not allow one state of the Eurasian Union to rise to some extent economically at the expense of another. And is it possible to imagine the long-term effectiveness of any union, if in one of its capitals the authorities cherish hopes for total supremacy on the entire Union territory. The experience of the European Union has vividly demonstrated that it is simply impossible to integrate with an eye to enriching some due to the impoverishment of others. This formula is a priori aimed at the final disintegration. That is why it is not necessary to assume that the construction of the Eurasian Union will be based on some insurmountable differentiation and aim at the rule of Russia or any other country of the Union. Over time, a new currency of an economic conglomerate could appear, but after the Union demonstrates its viability.

After the information that Russia, Belarus and Kazakhstan are ready to integrate even more closely, the conversations about whether the Eurasian Union will be an open territorial entity, or whether new members are not included, began to show themselves more often. If you are guided by the position of the official authorities, then the economic conglomerate, it seems, will not close on three states. In principle, any state that brings its legislation under the norms of the EEC may eventually become a member of it if other members of the EEC are interested in this. But the problem is that far from all the leaders of those countries whose peoples are fighting for integration in the post-Soviet space are ready to take the path of making certain legislative decisions. The same Tajik president cannot decide whether he is ready to lead Tajikistan along the path of integration with the Customs Union or is not ready. According to the latest information, they say in Dushanbe that they would be happy to start the procedure of joining the CU, but Tajikistan has no common border with the Customs Union, and therefore the Tajik authorities are waiting for Bishkek to show itself ... Not everything is fine with Bishkek either. On the one hand, there is a desire of the Kyrgyz authorities to begin deep integration with the Customs Union, but, in fact, no serious legislative measures in this direction have yet been taken.
It should be noted here that the Prime Minister of Kyrgyzstan, Jantoro Satybaldiev, recently said that Kyrgyzstan had an indispensable desire to join the CU, having received for this preliminary observer status. For this to happen, all three member states of the Customs Union must give good.

Based on this, we can assume that Kyrgyzstan will still be in the Customs Union. How profitable will it be for Russia, Belarus and Kazakhstan, given the current state of the Kyrgyz economy? - while the question. As a question, how Moscow, Minsk and Astana will straighten the economic situation in Kyrgyzstan if Kyrgyzstan joins the CU, and then, possibly, into the Eurasian Economic Union. If this is done according to the type of EU lending, then nothing good, judging by the situation in Europe, it definitely will not end ... In this case, you will have to look for other ways. Let us hope that allied officials already have the outline of such paths.

The question of integration with the Customs Union, and subsequently the Eurasian Union, of the Central Asian republics, of course, is interesting and important, but no less interesting is the question of whether Ukraine will take the path of integration. The last meeting of Vladimir Putin and Viktor Yanukovych did not give definite answers. The Ukrainian president said something confused about what Kiev would think, and the Russian president made it clear that the integration train could leave if Kiev thought too slowly ...

The acute gas issue, which once again arose between Russia and Ukraine, today shows that Ukraine is clearly not going to take integration steps. True, in Kiev, large Russian business is accused of unwillingness to stand on the integration rails. Here, the scythe of some ambitions, in all likelihood, found the ambitions of others on a stone. Gazprom, apparently, for the sake of Ukraine’s compliance, stated that the gas traffic to Europe through Ukraine is becoming less and less attractive for it, since alternative branches of blue fuel delivery to the European Union have appeared. At the same time, the Ukrainian prime minister, Azarov, said that until today Moscow had been selling gas to Ukraine at an exorbitant price of 530 dollars for 1 thousand cubic meters (based on the so-called "Tymoshenko's agreements"). In fact, the price of Russian gas for Ukraine is not at all 530 dollars per thousand cubic meters, but 406 (for February). So Azarov is clearly exaggerating ...

Germany, for example, after the commissioning of the Nord Stream receives Russian gas at about 375 dollars.
This price, negotiated in the contract, clearly does not suit Kiev, and therefore the Ukrainian authorities decided to inflict on Russia, unwilling to revise the terms of the contract without Ukraine’s desire to enter the CU, with a kind of counterstrike. It lies in the fact that Ukraine will buy the so-called reverse (reverse) gas from European countries: Germany, Hungary, Slovakia, Poland. At the same time, the price of this gas for Ukraine will be in the corridor from 380 to 404 dollars for 1000 cubes. There is a difference? For the Ukrainian leadership, apparently, it is great.

The first gas supply "backyards" to Ukraine has already gone. If you outline the route of these supplies, it looks very specific. Russian gas through the “Nord Stream” turns out to be in Germany, and from there through the pipe, through which it flows back to Ukraine when it flows into Europe. This seems to be nonsense, but it is precisely this ornate version of gas supplies to Ukraine for Kiev that turns out to be cheaper than directly from Russia ... With this “horse-riding” the official authorities of Ukraine are going to make Russia understand that you need to do something with fuel prices ...

In such conditions, it is necessary to consider questions about the economic integration of the CU and Ukraine without leaving the negotiating tables until a position that suits everyone is found. If this series of mutual demarches of Russia and Ukraine does not stop, then, obviously, the Eurasian Economic Union will eventually begin its work without Kiev. And Kiev itself will already be in an interesting position: the position between the two unions - European and Eurasian, the first of which they do not take, the second - for some unintelligible reasons, it does not yet want to join ... In general, someone needs to do The first step to meet, stepping over their ambitions.

Ctrl Enter
Noticed a mistake Highlight text and press. Ctrl + Enter
We are
Myths about the future incapacity of the Eurasian Economic UnionKyrgyzstan is ready to become the fourth member of the Customs Union: who will be in the black?
276 comments
Information
Dear reader, to leave comments on the publication, you must to register.