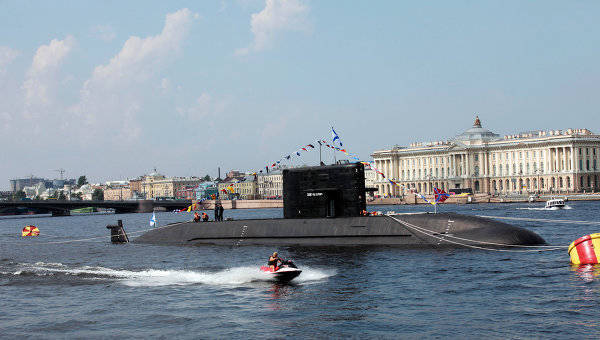 China became interested in the possibility of acquiring non-nuclear submarines (NNS) Amur-1650 from Russia, the production of which had serious problems previously. This was announced on Thursday during the international exhibition of aerospace and naval equipment LIMA-2013 in Malaysia.


US experts of the Congressional Research Service believe that China’s interest in the new export products of the Central Design Bureau for Marine Equipment Rubin, which is the developer of the Amur-1650 submarine and offers it to the world market, is linked to plans for further exploration by Chinese submarine technology specialists world-class and their introduction into the submarines of their own design. The experts presented their views on the development and modernization of the naval forces of the People’s Liberation Army of China (PLA) in the new report “Modernization of the PLA Navy,” ITAR-TASS reports.

# {weapon} According to the VIEW newspaper, on Monday the Chinese media reported that before the visit of Chinese President Xi Jinping to Moscow, Russia and China signed a framework agreement on the supply of Su-35 aircraft and Lada-class submarines, is "Cupid-1650."

According to the document, China will buy four Lada-class submarines from Russia. This information has not yet received official confirmation.

It was noted that the submarines for China will be equipped with a foreign-made air-independent power plant.

Currently in service with domestic fleet there is the only head submarine of this project, “St. Petersburg”, acting, in fact, as a prototype, since the submarine had problems with the propulsion system and the combat information control system.

Earlier, the construction of two other submarines of the Lada project, Sevastopol and Kronstadt, was frozen by the previous commander-in-chief of the Navy, Admiral Vladimir Vysotsky. The decision to resume the mass production of these submarines was made only in February 2013 of the year.

According to experts, in order to make a decision on the modernization of the Lada submarine project and their further serial production, the Navy representatives and the designers had to analyze all current trends of world submarine shipbuilding. The technologies of Western firms are more developed, however, Russian designers use their skills based on considerable experience.

In particular, the new principle of producing hydrogen on board a submarine allows Russian shipbuilders to create an air-independent power plant at a much lower cost.

On the submarine, a new type of hydroacoustic coating for the hull is used, which ensures high secrecy of navigation. Compared with previous projects, the noise level has been reduced; for the first time in world practice, the St. Petersburg submarine is equipped with systems that ensure its environmental safety.

The diesel-electric submarine of the 677 "Lada" project was developed by Rubin Central Design Bureau (St. Petersburg). At the end of the 1990s, two boats were laid at the Admiralty Shipyards (two more hulls - in 2005 – 2006).

Ctrl Enter
Noticed oshЫbku Highlight text and press. Ctrl + Enter
We are
Innovation Day of the Southern Military District: Pictures from the ExhibitionThe action “Military service under the contract is your choice!” In Rostov-on-Don: future contract servicemen, exhibitions and “Russian Knights”
7 comments
Information
Dear reader, to leave comments on the publication, you must to register.