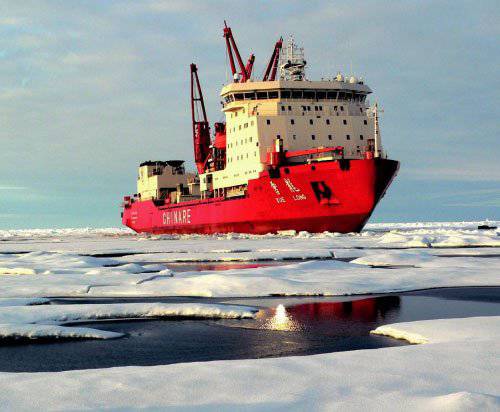 For several decades, the Soviet Union, and then Russia, transported part of the cargo along the Northern Sea Route. Despite the apparent complexity, this route was beneficial because of its relatively short length and therefore took a considerable percentage of all transcontinental traffic. At the same time, the Northern Sea Route was the object of envy of a number of foreign countries who wanted to have such convenient transport communications, but could not afford it. Now there are reports that in the coming months a new carrier will appear in the seas of the Arctic Ocean.


The importance of this path is due to its small length. For example, to deliver cargo from Murmansk or Arkhangelsk to Vladivostok, ships need to travel less than six thousand nautical miles. If you get to the Far East, bending around Europe and passing through the Suez Canal, you will have to go more than 12 thousand. miles The benefit is obvious. In view of such specific features, the Northern Sea Route is attractive not only for Russian shipping companies. A few days ago it became known that part of their goods would be transported by China to the northern seas.

At the recent Arctic Summit held in Norway, the topic was addressed by the Director of the Chinese Polar Research Institute, Huigen Yang. He said that his organization had completed all the necessary research and in the summer of the current 2013 of the year, Chinese merchant ships would make their first commercial voyage along the Northern Sea Route. Beijing has high hopes for this route, since it reduces the distance and, consequently, the time and cost of freight from China to Europe. In this regard, in the coming years, full-scale development of the Northern Sea Route is planned.

Last summer, the Chinese icebreaker Xuelong with an expedition led by Huigen Yang made a test trip from China to Iceland. During this voyage, scientists gathered a lot of information about the state of ice in the seas, and also made several conclusions. It was noted that the amount of ice on the route was less than expected. For this reason, the Chinese sailors changed the return route and went a little farther north than they originally intended. Thus, in the course of just one campaign, we managed to collect almost double the amount of information. Probably, this fact ultimately had a beneficial effect on the timing of the implementation of the first commercial flight.

The expectations of Chinese researchers regarding the amount of ice probably did not materialize due to the fact that in recent years there has been a slight decrease in the “cap” of the Arctic Ocean. According to various sources, over the past three years, the glaciation intensity of the southern seas of the ocean has fallen by almost a third. It is too early to predict further events, but it is already clear that China’s attention to the Northern Sea Route will not decrease, and will only increase in the future.

According to the estimates of the Polar Research Institute of China, up to 2020, the volume of cargo transportation along the Northern Sea Route should reach a level of at least 5% of the total Chinese cargo traffic associated with international trade. In addition, growth figures are called up to 15%. It is worth noting that even if only a tenth of all cargoes are transported by the Northern Sea Route, then in this case, according to some forecasts, the total turnover will exceed 500 billion euros. In addition, Huigenn Yang notes that with proper preparation, the new route will become popular among merchants. In the light of such an obvious statement, it becomes clear why in just a few years China intends to bring 10-15 to the northern seas immediately from its foreign trade traffic.

Earlier, for several decades, the only operator of the Northern Sea Route was the Soviet Union, and then Russia. Other countries have begun active efforts to master this communication only in the last few years. In this regard, the question arises: how can Russia use the Chinese plans to its advantage? First of all, it is worth remembering that at the moment China has only one icebreaker capable of working on the Northern Sea Route. Other vessels of this class are only being built and they will be commissioned in a fairly distant future. Russia has several necessary icebreakers at once, and therefore, for example, can provide services for escorting merchant ships.

A few days ago, the Russian government issued a document according to which in January of the next year a new organization will begin its work under the Federal Agency for Maritime and River Transport. The new Administration of the Northern Sea Route will organize the organization of traffic along the routes in the seas of the Arctic Ocean, monitor the ecological state of the region and solve other legal issues. Judging by the available information, the Administration is created for the purpose of organizing the movement of vessels, as well as for the possibility of providing some paid services. Thus, Russia will be able to receive money even from those carriers that do not charter Russian cargo ships.

According to the Federal Agency for Maritime and River Transport, over four million tons of cargo were transported by the Northern Sea Route in the past year, 2012, of which transit was 1,2 million. This year, a slight increase is expected at 5-6%. From Chinese plans, it follows that in the very next few years, the volume of traffic will increase significantly and, as a result, Russia's revenues from icebreaking and pilotage escorts may also increase significantly.

Unfortunately, in the matter of transcontinental transportation, Russia so far can only rely on the Northern Sea Route and things connected with it. An alternative route for cargo could be the Trans-Siberian Railway, but it has a number of problems. The lack of due attention in past years has led to the deterioration of infrastructure and, therefore, Transsib is not able to fully perform its functions. A few years ago, work was started to modernize the highway, but even in this case, it is not the railroad that is of greater interest to merchants, but the sea.

In addition to China, India and Singapore are showing interest in the Northern Sea Route. However, these countries are still limited to general statements. Probably one of the main reasons for the lack of noticeable activity in this direction is the fact that you can reach the northern countries of Europe from South or Southeast Asia not only through the northern seas, but also through the Suez Canal. Moreover, in some cases, shipping through the Red and Mediterranean Sea is faster and more convenient than through the Bering Strait and the seas of the Arctic Ocean. Thus, over the next few years, China will remain the only active participant in transportation via the Northern Sea Route besides Russia.