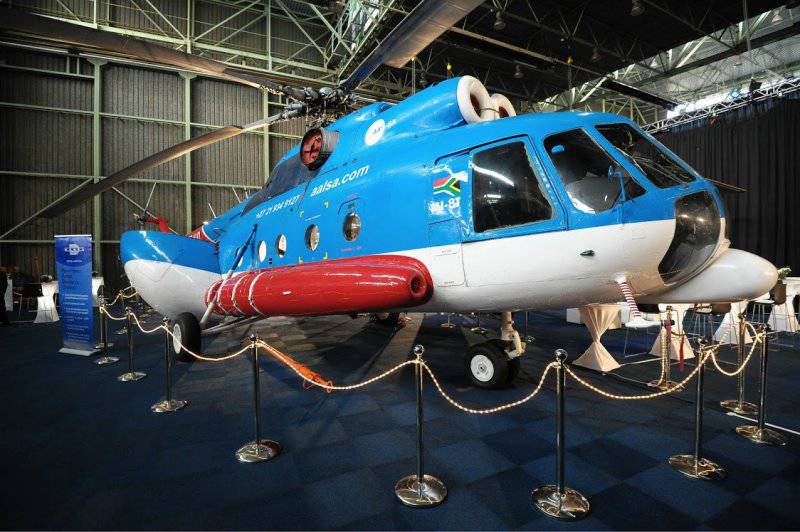 Russian Helicopters Holding, a subsidiary of Oboronprom, which is part of Rostec State Corporation, and the South African company Denel Aviation, opened a service center for repair and maintenance of Russian-made helicopters in South Africa. Thanks to him, the Russian holding will be able to strengthen its position in the African market.

The service center was opened on 26 March 2013, in Johannesburg. This event is timed to the summit of the BRICS countries in South Africa. The opening ceremony was attended by the management of the holding company "Helicopters of Russia" and Denel Aviation, representatives of South Africa, as well as heads of operating companies and potential customers of Russian helicopters.

“This is an important stage in the implementation of the strategy for the development of a global after-sales service for Russian helicopters,” said Rostec Deputy General Director Dmitry Shugaev. - In Africa, as in other traditional markets for us, Russian helicopters are very popular. Therefore, it is very important to provide on-site services, in this case it allows us to maintain the high efficiency of our partners' business in the sub-Saharan region, timely providing certified after-sales service for a fleet of civilian helicopters. The high level of quality of services provided in our service centers around the world makes Russian equipment even more attractive to buyers. ” 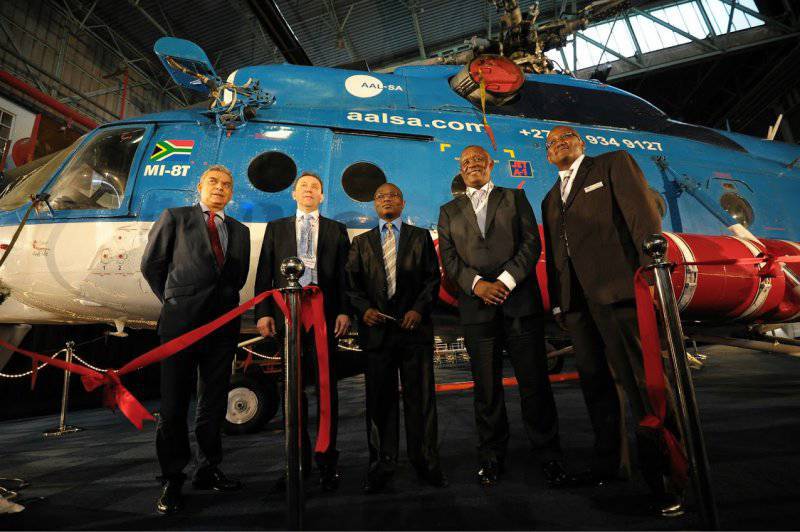 To date, the Russian-made helicopter fleet in Africa has about 600 units - these are the Mi-8 / 17 and Ka-32 helicopters. “The maintenance of such a fleet requires the organization of a modern service support system in the region,” said Dmitry Petrov, general director of the Russian Helicopters holding company. - The creation of a service center by Denel Aviation was a serious step in this direction. A large regional center is planned to be built on the basis of the enterprise, which in the future will be able to provide after-sales and after-sales service for all models of Russian-made helicopters in the sub-Saharan region. ”

The Helicopters of Russia holding provided the service center in Johannesburg with the necessary equipment, provided documentation, prepared it for work, and also organized the training of Denel Aviation employees at one of its enterprises, the Novosibirsk Aircraft Repair Plant.

The decision to establish a service center was made as part of a partnership agreement signed by Denel Aviation and Oboronprom in September 2012 at the Africa Aerospace and Defense air base in Pretoria, the seventh African aerospace and defense industry showroom. As part of the partnership, Denel Aviation plans to provide after-sales service for civilian helicopters manufactured by the Russian Helicopters holding company.

In the future, the South African company plans to gradually expand the range of after-sales service and overhaul of not only civilian but also military helicopters, as well as Russian-made aggregate equipment.

Russian Helicopters OJSC - A subsidiary of OPK Oboronprom (part of Rostec State Corporation), one of the world leaders in the helicopter industry, the only developer and manufacturer of helicopters in Russia. The holding was formed in 2007. The head office is located in Moscow. The holding includes five helicopter factories, two design bureaus, as well as enterprises for the production and maintenance of components and a service company that provides after-sales support in Russia and abroad. The buyers of the holding’s products are the Ministry of Defense of Russia, the Ministry of Internal Affairs of Russia, the Ministry of Emergency Situations of Russia, Gazprom Avia Airlines and UTair, large Russian and foreign companies. In 2011, the revenue of Russian Helicopters under IFRS increased by 27,8% and amounted to 103,9 billion rubles, while the volume of deliveries reached 262 machines.

Denel Aviation specializes in the repair, maintenance and upgrading of aircraft, and also provides logistics support for aircraft in the African continent. It is part of Denel, which is the largest military vehicle manufacturer in South Africa and acts as a key supplier for the South African National Defense Forces. Denel’s sole shareholder is the government of South Africa.