Kazakhstan is great, but Russians have nowhere to retreat 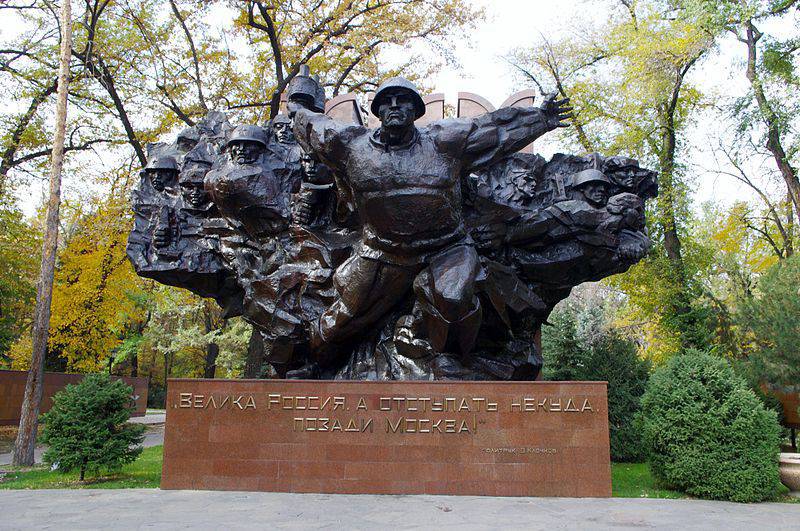 
The authorities of the Kazakh city of Alma-Ata want to remove from the monument to the Panfilov’s heroes the phrase of well-known political instructor Vasily Klochkov: “Russia is great, but there is no place to retreat. Behind Moscow! ”, A number of Russian and Kazakh media published such reports. According to these reports, it was planned to replace the inscription with one of the others, for example: “The feat of Kazakhstanis is a heritage for the people, an example for generations”, “Eternal peace to the heroes of Kazakhstanis!” And “The feat of Kazakhstanis who fought for their Motherland will be remembered forever.”

As a result, it turned out that the Almaty city council of veterans headed by Yerengyip Shaikhutdinov became the initiator of this idea.

However, after some time, a refutation came out in which Kazakh officials said they did not plan to change the inscription on the memorial, and Erengaip Shaikhutdinov explained that there was no initiative to replace the well-known expression of political instructor Klochkov. According to Shaikhutdinov, the council of veterans only wanted to add one of the inscriptions in order to perpetuate the memory of the people of Kazakhstan who took part in the Great Patriotic War.
And although the incident was settled, it was not possible to avoid public resonance. Moreover, there is a strong suspicion that it was precisely because of this resonance that the decision to replace the inscription was never made.

The Window to Russia project decided to find out what our compatriots living in Kazakhstan are thinking about this incident.

The editor-in-chief of the Russian in Kazakhstan website, Ilya Namovir, believes that “in principle, история with the monument to the heroes of Panfilov is not so surprising and atypical. Rather the opposite. Such initiatives, aimed at erasing our memory of our common past in the USSR from the memory of Kazakhstan, steeped in the spirit of historical revisionism for the sake of the national situation, are not uncommon.

It just so happened that this particular proposal of a certain Mr. Shaikhutdinov was publicized in the media and now, of course, taking into account the public resonance caused, it is unlikely to be implemented, which is confirmed by the words of the head of the cultural department Yerbolat Auezov, who assured that this issue “didn’t even discussed. " But this is a given case, and how many such proposals go to municipal and other bodies, and how many of them are being quietly implemented? Monuments disappear, streets are renamed. In connection with the abolition of the moratorium on renaming, I believe, the question of renaming Petropavlovsk, Pavlodar, Ust-Kamenogorsk will emerge again. ”

Ilya Namovir also stressed that “in the new amendments to the law on onomasticism, of course, it is said that the question of renaming will be submitted for consideration only if it is supported by the residents of this or that locality. But where is the guarantee that a story similar to the renaming of the Shchuchinsky district to Burabai Audany a few years ago will not happen again? Residents of this area from the onomastic commission learned that, it turns out, 81% of them support this renaming, although it was found out during polls of residents that none of them participated in gatherings and did not vote “for” or “against” and, in general, I was not aware that similar gatherings of residents were held.

In addition, the law on onomastic leaves, as a result, the last word on renaming, not for the residents, but for the Main Republican Onomastic Commission. So, if someone “upstairs” suddenly wants to get rid of the remnants of Russian toponymy on the map of Kazakhstan, then there is a suitable tool for that. ”

Chairman of the Republican Slavic Movement “Lad” (Kazakhstan), Maxim Kramarenko, believes that “throwing in the idea of ​​renaming the memorial of glory to Panfilov’s heroes made by the head of the NGO“ Organization of Veterans ”is nothing more than striving to destroy the existing spiritual ties between nations post-Soviet space. Under the slogans of the need to foster Kazakhstani patriotism, part of the Kazakh political elite is trying to "spread" the public consciousness from Russia, gradually removing from the history of Kazakhstan the "pages" about the positive experience of finding the Kazakh people in the same state as Russia, such as the USSR and the Russian Empire.

At the same time, one can observe the formation of "modern Kazakh mythology" about historical Russia, as a state that has brought only harm to the Kazakh people. These include the famine of 1932-33 in Kazakhstan, which is positioned by a number of public figures, as a targeted genocide policy towards the Kazakh ethnos, conducted by the Soviet leadership. ”

In addition, Kramarenko notes that “there is a heroization of historical characters who had pronounced anti-Russian views. For example, the same Mustafa Shokai, who was in Germany during the Great Patriotic War, was in contact with the fascists and was directly involved in the creation of the Turkestan Legion. ”

“We can say that all these are links of one political strategy, the roots of which are located across the ocean. The idea of ​​replacing the slogan on the Glory Memorial did not accidentally arise simultaneously with the initiative of the Kazakh opposition to hold a referendum against the Customs Union, whose appearance is so fearful in the United States, says Maxim Kramarenko. - At the end of last year, Hillary Clinton instructed all pro-Western forces to prevent the creation of the Eurasian Union. In Kazakhstan, this directive of the State Department is being implemented in various forms.

After all, this integration undertaking has great prospects that will help strengthen all the states participating in it, which in turn will lead to their more independent foreign policy from the US. ”

As can be seen, there are enough unresolved problems in the political relations of Kazakhstan with its main strategic partner. This applies in particular to the Eurasian integration, the author and one of the initiators of which Kazakhstan itself is. So is it not better to focus attention and efforts on existing issues than to create artificial problems?

The Park of Glory Memorial in the Park named after 28 Panfilov Guardsmen in Alma-Ata was built to mark the 30 anniversary of the Victory in the year 1975. The opening of the four-part memorial complex took place on 8 on May 1975 of the year. The first part - the high relief "Oath" (on the left side) - is dedicated to young fighters for Soviet power in Kazakhstan. The central part of the triptych - “Feat” - captured the images of the Panfilov heroes who defended Moscow with their breasts. On the right is the song "Trumpeting Glory", which gives the whole memorial an optimistic sound, its images embody the hymn of triumphant life. At the Eternal Flame - massive cubes of labradorite, beneath which bricked up capsules with the earth, brought from the cities of heroes.

Ctrl Enter
Noticed a mistake Highlight text and press. Ctrl + Enter
We are
Kazakhstan: ukro-maydannaya rotWhat you didn't want to know about England
213 comments
Information
Dear reader, to leave comments on the publication, you must to register.