Are not so terrible standards TRP as they are painted? .. 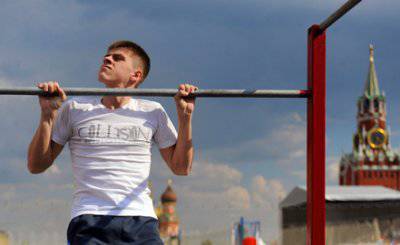 Vladimir Putin’s initiative to revive the standards of the TRP (“Ready for Labor and Defense”) in Russia made a lot of noise. Recall that with such an idea the Russian president spoke on 13 in March 2013, when he first visited the Sambo-70 sports center, and then met with the heads of various departments. Vladimir Putin then stated that at one time the mechanism of the TRP was really working and allowed an objective assessment of the level of physical development and fitness.

“The revival of this system in a new, of course, modern format can be of great benefit. You can call it differently. The last thing I would like to use is some bureaucratic abbreviations. ”
“I ask the Ministry of Education and the Ministry of Sport to deal with this issue in detail. I believe that the assessment of the level of physical training of a schoolchild who passed the standards for the complex, about which I just said, must be reflected in the education certificate, and should be taken into account when entering higher educational institutions. ”

The words that in one way or another it would be possible to reanimate the qualitative system of assessing the level of physical training for people of different ages, in principle, found their response among Russian citizens (and especially, remarkably, among the bureaucrats). For example, Deputy Prime Minister Dmitry Rogozin said that the idea of ​​the possibility of reviving the TRP is good, and that he himself will actively help ensure that these norms are surrendered in those departments that he (Rogozin) oversees.


“We will maximally promote sports in our free time, on weekends - competitions, and so on.”
, - said the Deputy Prime Minister.

However, if the idea of ​​the large-scale development of physical culture and sports in Russia did not cause the public any particular questions, then here’s the option of using the results of passing the TRP standards when enrolling school graduates in higher educational institutions caused quite heated discussions. Many at first began to say that if in the USSR the results of passing the TRP were not taken into account when enrolling in higher education institutions, then no experiments will be conducted in Russia in this regard. Like, Putin said it in a temper, not thinking it over.

But if Putin said, without having considered all the options, then those persons who were entrusted with the development of the TRP standards (along with the new name and rules for its implementation in Russia) quickly seized upon the idea submitted by the president and after a short time presented their options.

So, just the other day, the Ministry of Education and Science in the person of Deputy Minister Igor Remorenko (not the deputy, in whose office not so long ago, investigators conducted a search) clarified his position on this issue. Mr. Remorenko, in particular, stated that the results of passing the standards of the TRP and the points for passing the Unified State Examination (USE) will somehow be summed up.
At the government hour in the Lower House of Parliament, the Deputy Minister of Education and Science noted:

Saying about summing up the results on the USE and the TRP, the specialists of the Ministry of Education and Science, actually confirm that they themselves are not aware of how this summation will look, but will not exactly refuse to promptly respond to the initiative of the president. If Vladimir Putin said that it is necessary to take into account the norms of passing the TRP upon entering higher education institutions, it means that the Ministry of Defense is ready to take them into account here and now, even if the standards themselves are not developed, or how this accounting would be more effective to carry out ...

More restrained position on this issue took the Minister of Sport Vitaly Mutko, who said:

"We proceed from the fact that the horse should not be put in front of the horse if you (addressing the president - author's note) today state yourself: the child’s physical education is weak, the difference is big."

In this regard, if we speak in a strictly bureaucratic language, the Ministry of Education and Science has penetrated much deeper with the words of Vladimir Putin and is already ready to report on positive results. There are no norms of the TRP, but the Ministry of Education is already going to add on the results of their passing to the results of the Unified State Exam for the course of a comprehensive school.

This is how often it turns out: where you need to start work, really, roll up your sleeves and refuse vacations and weekends - complete calm. But where first it is necessary to measure seven times, the same Minobr is already starting to cut it with the yard-work scissors. At the same time, neither Mr. Remorenko, nor his immediate superior, Dmitry Livanov, so far, even parliamentarians cannot explain how they are going to work in terms of recording the results of the TRP.

I do not want to build pessimistic forecasts, but in this situation, if everything continues to be done in an inexplicable fire regime, then this year the delivery of TRP standards may affect the final results of tens of thousands of graduates. After all, the ministry, as always, will have no time to figure out how to rationally take into account the unimpressive results of the physical training of the student, who at the same time impressively showed himself during his studies in chemistry, biology and mathematics for admission, for example, to a medical school. They can just take it and fold it ... But in the end it turns out that the chances of being admitted to the same medical university for a person who ran the scoop better than others and caught up on the crossbar, but who failed the biology exam, may turn out to be higher than his potential competitors .

In this regard, the question arises: if you enter the TRP standards for assessing the physical preparation of Russians of different ages (which, in principle, really healthy), then why do you need to take into account these standards in a priori repressive version? Like, if you passed - the road is open, but not passed - this is your “white ticket”. So it turns out? .. Harsh ...

Is it really impossible to introduce the same physical norms as a system, let's say, self-stimulation, as it was in its time in the Soviet Union (during the dawn of the TRP). After all, a responsible person who has lost (did not have time to acquire) good physical form will naturally have a desire to engage in physical self-improvement. And an irresponsible person in all respects will not give a damn about the standards of the TRP, and about his health, even if he doesn’t care about it, both the Ministry of Education and the President personally forbid it ...

In the meantime, the new Russian standards are not analogous to the Soviet TRP, it is worth considering those standards that took place about 40 years ago. Recent changes in the standards of the TRP in the USSR were made at the official level in 1972 year.

As an example, consider the list of standards that applies to men - representatives of the 4th stage (19-39 years). Select the age segment 29-39 years of this stage.

And here are not yet taken into account swimming, shooting, cross-country skiing, pulling up, flexing and extending the arms in a prone position, hiking.

If such standards are introduced everywhere, it is not quite clear how their implementation will be monitored, for example, in private enterprises. Surely, in this direction, someone is going to act by purely repressive methods: if you don’t catch up and go skiing - deprive the license or increase the tax rate ... If the authorities have such plans, then we can say in advance that it’s from the sensible idea of ​​attracting Russians to physical education and ultimately, nothing good will end up in sport, but new forms of corruption will appear. After all, where a cane system begins to loom on the horizon (a sort of voluntary-compulsory option with the possibility of government intervention), there arises the temptation to bypass this system by golding the pen for the one who needs it.

In general, in this case our authorities should be advised (although who are we here to listen to our advice ...) so that the decision to revive the TRP standards as a component of the revival of mass physical education in the country was taken carefully so that the ministries do not begin to flog fever trying to report faster than others. If you do everything with undisturbed dizziness from headaches, then the result will be. Otherwise, as the political classic used to say, it can turn out “as always” ...