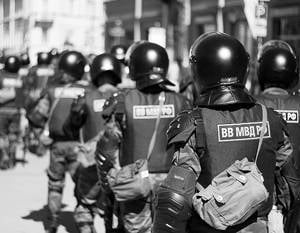 Serious accusations against the supplier of body armor and helmets were made to the Ministry of Internal Affairs. According to the ministry, the helmets made in China were intended not for the police, but for use in the steel industry. Documentation was faked. The supplier of products for half a billion rubles "violently" refutes these accusations and even filed a lawsuit against the Ministry of Internal Affairs.


The Ministry of Internal Affairs of Russia announced the termination with the Zashchita Corporation of the previously concluded contract worth 500 million rubles for the supply of protective helmets, body armor and armored vehicles. The contract was signed in the summer of 2012 of the year, but during the inspection of the Ministry of Internal Affairs it turned out that this company had violated the requirements of the state order.

Under the terms of the contract, the products supplied were to be produced in Russia and have documents confirming the state tests. However, it turned out that Zashchita Corporation supplied the Ministry of Internal Affairs with helmets and body armor purchased in China. “In particular, helmets were intended for use in the steel industry, their labeling was deliberately replaced by an artisanal method, and the documentation was forged,” the press service of the Main Directorate of Internal Security of the Ministry of Internal Affairs said.

During the inspection of helmets and bullet-proof vests supplied by the Ministry of the Interior, it also became clear that the means of protection did not ensure the level of bullet resistance stated in the state contract.

The verification materials will be sent to the investigating authorities for a procedural decision, the Ministry of Internal Affairs notes. The Office intends to also require the payment of penalties.

By law, the customer has the right to terminate the contract with the employer in case of non-fulfillment or improper fulfillment of the requirements of the order, as well as to impose fines and deduct them from the cost of the state order.

In turn, the corporation "Protection" charges the Ministry of Internal Affairs refutes and does not admit its guilt.

As the general director of the company, Alexander Shor, said, the company entered into nine contracts last summer. “But there was a rather lengthy procedure for acceptance of this product by the bodies of the Ministry of Internal Affairs. Despite the complete readiness of the products, we could not deliver it, it is in warehouses. There are no documents proving that it is of poor quality. It is confirmed by the relevant test reports. I deny all the information about handicraft production with fury. How Russian vehicles can be Chinese - Ural, Gazel, and so on, I don’t understand, ”RIA quotes Alexander Shor.News».

In response to the prosecution, Zashchita Corporation filed a lawsuit against the Ministry of Internal Affairs with the Arbitration Court. “We have filed lawsuits in arbitration, we are waiting for the date of the court hearing,” said the general director of the company. According to him, the lawsuit was sent a week ago, and representatives of Zashchita received a claim from the Ministry of Internal Affairs three weeks ago.

The tender for the supply of helmets, body armor and armored vehicles, which Zashchita won, was announced in June 2012. In November, 2012, four more tenders were announced for the supply of almost 56 thousand new body armor for the Ministry of Internal Affairs worth 916 million rubles. As the media wrote, half of this amount was planned to be spent on the purchase of 44,5 thous. Vest of 2 protection class, which are equipped with pockets for a Makarov pistol, a spare shop, a radio station, a gas canister, and a Kalashnikov machine gun. Their weight can reach eight kilograms, and the average cost - 13 thousand rubles.

In addition, the Ministry of Internal Affairs ordered 10,5 thousand of more expensive and durable body armor 5-th class of protection, which are equipped with side protection, aprons and collars and, as a rule, are issued to fighters traveling to the North Caucasus. Such vests weigh up to 13 kg and cost 40 – 45 thousand rubles.

This is not the first case in the past few years, when the Ministry of Internal Affairs identifies cases of fraud in the purchase of body armor. Thus, in 2010, the media reported that the engineering department of the Main Interior Committee of the Interior Ministry of the Interior Ministry purchased several tens of thousands of repaired body armor under the guise of new ones from CLASS.

In addition, it was found that the NGO changed the thickness of the armor plates and the steel grade, due to which the body armor became heavier by two kilograms - to 15 kilograms. As a result, the Interior Ministry did not renew the contract with the head of the engineering department. However, information about the initiation of criminal proceedings was not.

In 2008, the former head of the supply department of the Main Rocket and Artillery Directorate (GRAU) of the Russian Ministry of Defense Valery Znakhurko was sent to court. According to the investigation, the department headed by him in 1999 – 2005 bought from the Moscow company “Artess” for troops in the North Caucasus armored vests that were unsuitable for the protection of life and health. During the examination, most body armor were pierced. The Major General was accused of fraud and abuse of office.

According to the investigation, the supplier ordered cheap, low-quality products to appropriate the price difference. The main business partner in this matter was Tatyana Romanova, co-owner of “Ardessa”. In total, Romanova sold the army about 14 thousand armored vests for 203 million rubles. Of these, 93 million rubles Znakhurko and Romanov arrogated to themselves. In 2011, they were sentenced to four years in prison each.

Ctrl Enter
Noticed oshЫbku Highlight text and press. Ctrl + Enter
We are
Rating of the most significant contracts of Russia for the export of drug products concluded in 2012
66 comments
Information
Dear reader, to leave comments on the publication, you must to register.