March 20 2013
84
Alexander Grigoryevich Lukashenko, who is called “the last dictator of Europe” in the Western media, gave a long detailed interview to Russia Today TV channel. Lukashenko has been in charge of Belarus since 1994 and is the permanent president of his country, having won the 4 presidential election since then. For the sake of justice, I must say that they criticize Lukashenko on Russian television as well. At the same time, not only on the NTV channel, which became famous at the show of “custom-made” stories, but also on the same Russia Today channel. In 2010, at the same time as the start of the NTV film cycle “The Godfather”, the film “Cruel Luke” was shown on RT, in which Lukashenka was directly called the last dictator of Europe.


If we talk about Russia Today, then, in the opinion of the German newspaper Tagesspiegel, this channel, which broadcasts to the world in English, Arabic and Spanish, is quite a successful embodiment of the Russian authorities' intention to create their own counterbalance to the BBC and CNN. This channel today, along with the export of military equipment and various energy carriers, is one of the most effective instruments of the foreign policy of the Russian Federation. Based on this and from the information presented on the channel, it is possible to judge with confidence the course of Russian foreign policy at certain periods of time.

In any case, an interview with the President of Belarus, who can both love and not love deserves attention. Since the scale of this personality is large enough, Alexander Lukashenko can be called the Eastern European Hugo Chavez. If we talk about “dictators”, then some Russian regional leaders head their subjects even more than Lukashenko. For example, Alexander Aleksandrovich Volkov, occupying various positions, heads the Udmurt Republic, starting with the 1993 year. 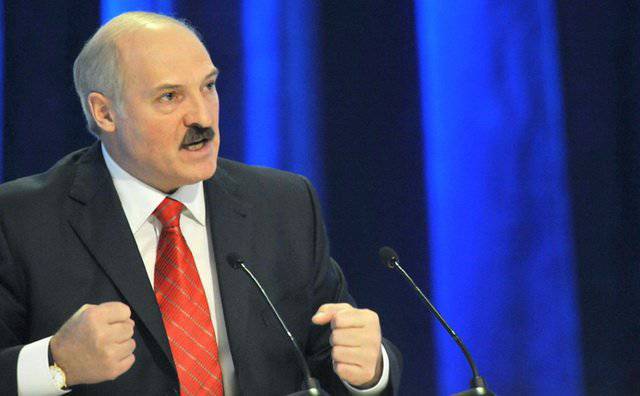 But back directly to the interview. In 2012, during his visit to Venezuela, Lukashenka took his youngest son, Nikolai, on a trip. The words of Hugo Chávez regarding the baby, Lukashenka answered that his presence proves the fact that we seriously and for a long time laid the foundations of our cooperation, while there is someone to adopt this baton through 20-25 years. These words were perceived by many as the fact that Lukashenko, in the guise of Nikolai, is preparing a successor for himself.

However, in an interview with the Russian channel, Lukashenko rejected such assumptions. Noting that in no case will not allow his successor to be someone from among the relatives. According to Alexander Lukashenko, he made an oath that he would not transfer power in the country to his relatives, relatives or children, completely excluding such a possibility. At the same time, he noted that the power in the country after Lukashenko will be taken by the one who wins the elections. Also, Alexander Lukashenko admitted that he had previously thought about this issue and decided for himself that he would not even publicly support any of the candidates. According to him, the elections will have to be fair, the people themselves must choose a new leader for themselves when the time comes, the Belarusian president stressed.

At the same time, he explained in more detail the statement made in Venezuela regarding the transfer of the baton. According to him, to continue does not mean to take the reins and sit in the presidential chair. According to Lukashenko, there are a million such babies in Belarus, like his 8-year-old son, and it is they who will continue the work he has begun. However, he noted that his son does not show any political aspirations, and he would not want him to go into politics. According to the president, 8-year-old Nikolai has already managed to eat politics from his father. 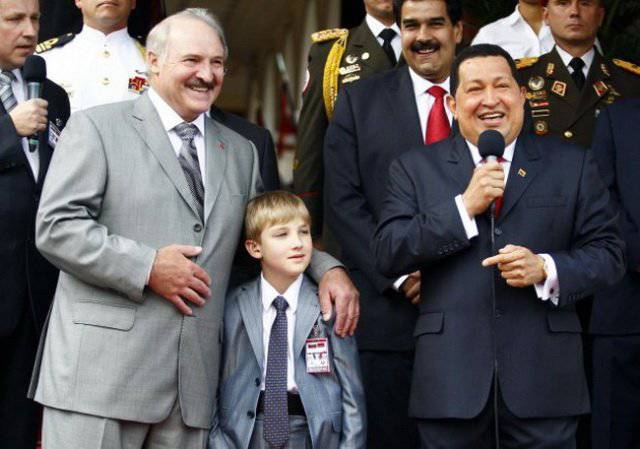 He told the president about his attitude to dictatorship and democracy. According to him, democracy in Belarus is no worse than in Europe or America. At the same time, he rather peculiarly proved to the journalist the absence of a dictatorship in the country. According to Alexander Lukashenko, he is trying to convince his Western partners with this thesis. In order to be a dictator like, for example, Stalin, you must have a resource. At the same time, the President of Belarus, stressed that he does not have such a quantity of hydrocarbon raw materials, which Hugo Chavez had, there is not as much natural gas as Russia has. In Belarus, it is not mined at all. He also noted that he is not sleeping with nuclear warheads, and also that in Belarus there are not 1,5 billion of the population, as in China. According to Lukashenko, in order to be a dictator and dictate his will, it is necessary to have resources in his hands: military, economic, social, population, etc. At the same time, Belarus has all these resources are very limited and Lukashenko objectively assesses his role on the political scene.

He also noted that today Belarus does not suffer from any globalism. According to him, the country is not going to solve any global problems of our planet, it simply does not have the resources for that. At the same time, he noted that Belarus seeks to find its place under the sun and live like normal civilized central European countries.

Lukashenko and the union state with Russia

Alexander Lukashenko assessed the integration of Belarus and Russia as a forced process. According to him, the two states have made significant progress on this issue over the years, but have not yet found the strength to put into practice all the functions and the construction that were provided for by the union treaty. Over time, we all came to the conclusion that we were not ripe even before this kind of association. At the same time, according to Lukashenko, this attempt gave positive and rather interesting results. The attempt to build a union state of the two countries gave impetus to a new formation: the Customs Union, which is now becoming the Common Economic Space, which we are currently trying to transform into a Eurasian Economic Union. 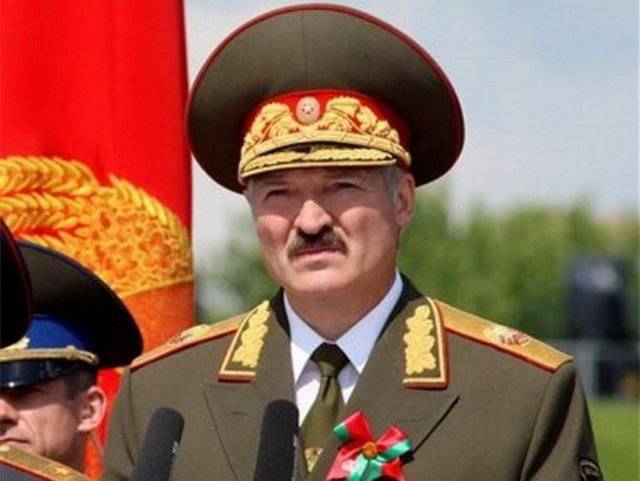 At the same time, the main result of his work and the work of his colleagues, Lukashenka, considers the fact that Belarusians, for the first time in their stories 2 has been living in an independent state for decades. According to Lukashenko, literally all the attributes of this state have been created, with the exception of the border with Russia. According to the President of Belarus, there is no need for this border, as the Russian Federation does not claim the lands of Belarus, and we do not claim its lands. On this occasion, the two countries have no problems with each other.

Lukashenko and the opposition

Speaking of the fact that in the 19 years in Belarus, not a single strong alternative opposition candidate appeared on the political scene, Lukashenko noted that so far, apparently, the acting figure is strong. Therefore, other political figures are invisible in its shadow. At the same time, the president apologized for his indiscretion. He also noted that this question should not be asked to him. Opposition politicians in the country called Lukashenko the “fifth column” because they do not work for their own state. And promote the ideas of those involved in their financing. At the same time, he noted that this state of affairs is difficult to recognize as normal and noted that no people will love such opposition. At the same time, he assured the journalist that the time would come and new leaders would definitely appear.

He also noted that he does not take seriously the existing opposition figures, who showed who they are in the previous elections. 10 alternative candidates were able to get 1,5-2% of the vote. Even if we assume that they were crushed, their ratings will be no more than 5%. Therefore, they should not be taken seriously. Especially if they go out and carry such heresy live that even the Belarusian people do not take them seriously. 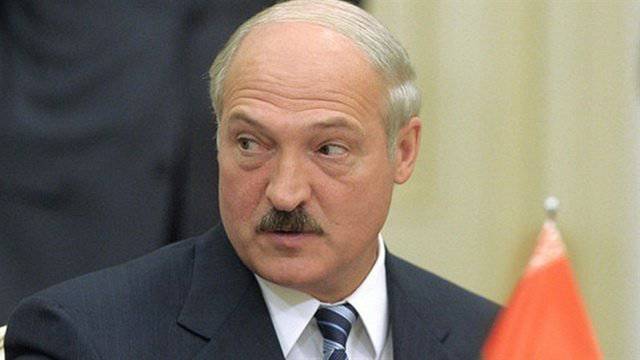 Journalists could not help asking the Belarusian President about Hugo Chavez, who was considered a friend of Lukashenko. Speaking about his figure and current international politics, he noted that the course of the deceased President of Venezuela had a significant impact not only on the development of Latin America, but also of the entire modern world as a whole. Hugo Chavez managed to shake up Latin America. And the fact that almost all the leaders there are now left-wing and almost all of them have arrived in Venezuela for mourning events, tells us a lot. He did a lot in the field of Venezuela independent policies, tried to unite the developing countries of the world. The process was launched, but it is not worth thinking that with the death of Chavez the process of freedom, justice, independence will cease. No, it will continue, although the role of Chávez in this process was significant.

In 2012, international media branded Lukashenko as homophobic. The occasion was the scandalous statement of the President of Belarus to the head of the German Foreign Ministry, Guido Westerwelle. When Guido Westerwelle once again called Lukashenko “the last dictator of Europe”, he replied that it was better to be a dictator than blue. On this occasion, Alexander Lukashenko does not worry and does not consider himself guilty, as he simply voiced his point of view.

According to him, in his time, this topic was raised by the Pole Sikorsky, while he himself only answered. Sikorsky began to ask me clarifying questions: "But in Moscow they banned the gay parade, and if you had such a plan to hold, would you ban it or not." To which Lukashenko replied: “You probably would not have banned. Of course, they would not have passed through the center of Minsk, but they could have gathered somewhere on the outskirts, the people would have looked and marveled. ” Well, he expressed his point of view on this. “Suppose I can forgive lesbianism for women, but the blue of men is never in my life. Because a woman becomes a lesbian, because we are crappy men, ”said Alexander Lukashenko.

Ctrl Enter
Noticed oshЫbku Highlight text and press. Ctrl + Enter
We are
The German people believe that Moscow is protecting its legitimate interests in Ukraine, and Sarah Palin gave Obama a nuclear idea."4 days in May" was removed from the air of NTV
Military Reviewin Yandex News
Military Reviewin Google News
84 comments
Information
Dear reader, to leave comments on the publication, you must to register.