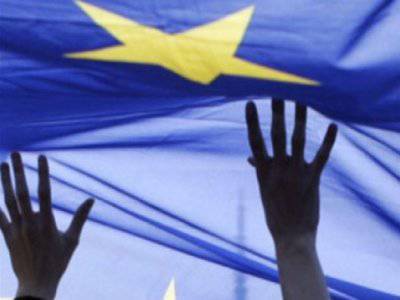 The so-called Ukrainian patriots say that joining the Customs Union is a loss of independence. But under an agreement with the EU, Ukraine must ensure that it brings all legislation into line with EU legal acts. Moreover, any newly adopted document of the European Commission, the Council of Europe, etc. should be immediately implemented in the legislative system of Ukraine. It can be argued that the negotiating group headed by Deputy Economy Minister Valery Pyatnitsky in negotiations with the EU voluntarily eliminated the sovereignty of Ukraine. A document in which one party is endowed exclusively with rights, and the other with only obligations, and under the penalty of punishment undertakes to live according to the rules of others, cannot be called a cooperation agreement. This is the "Act on the recognition of Ukraine's colonial dependence on the European Union."


At one of the conferences dedicated to the results of the recent Ukraine-EU summit, I was lucky to talk to Alexander Gorokhov, a man who read from cover to cover the draft agreement of Ukraine with the EU on the Free Trade Zone (FTA) that Ukrainian politicians and political scientists with stupid persistence referred to as the "Association Agreement". Why "lucky"? Yes, because there are only a few of those who have mastered a nine hundred-page document in Ukraine.

It is not a secret for anybody that the main lobbyists of the conclusion of the “Association Agreement” are the owners of the enterprises of the metallurgical, chemical, oil industry and for the production of electricity. And this is what Gorokhov reveals to them: “The Annex to the Agreement speaks of“ regulating emission limit values ​​for existing plants. ”And there are these — our factories — since those long years when environmental issues were little worried. But in Europe today these questions are so acutely that almost every year the requirements for environmental pollutants are tightened. And after signing the Agreement, when even EU bylaws become part of the legislation of Ukraine, the Council of the Association will only have to “determine the schedule for out of Ukraine’s drain on these conditions for existing installations. ”The Council will include 28 representatives from the European Union and 1 (!) a representative of Ukraine. Please answer who will decide with this“ controlling stake ”whether to close or not close any steel works Ilyich? As the saying goes, "for what they fought ...".

Waiting for a surprise and electricity producers, the surplus of which, like its own gas production, are exported to Europe at world prices. After the entry into force of the Agreement with the EU, Ukraine will not be allowed to export gas and electricity at prices higher than domestic ones. Therefore, in order to export energy products, it is necessary to raise their prices for the Ukrainian consumer.

Now about the dreams of Ukrainian agricultural producers in connection with the inevitable transformation of the state into a raw materials appendage. If in recent years Ukraine has exported to Europe 3 million tons of wheat grain, now wheat supplies to the EU will be limited to one million. Of the 300 tons of sugar that Ukraine is capable of selling to the European Union, it will be allowed to supply 10 less times! Similar restrictions are provided for all types of agricultural products. What is not surprising - agricultural wars over quotas do not subside even between full members of the EU. In addition, for the 24 groups of agricultural products, Ukraine undertakes to annually reduce the export duty by one percent, down to zero. By the way, for other types of raw materials, including products of primary processing of metals, Ukraine is obliged immediately after the entry into force of the Agreement to establish export duties twice lower than those that it managed to defend at the negotiations on accession to the WTO. And over the course of 7-10 years, it does reach zero.

And, since they remembered the WTO - after joining it, Ukraine was obliged to introduce a ban on selling meat, fat, butter and milk produced in households from 2010 (the entry into force of the relevant law was twice postponed, and before the presidential election, of course it will not happen). So, the PTA Agreement will also sweep sauerkraut, pickles, pickled apples, natural oil, calf tenderloin and even honey from our bazaars, because the “Directive on the General Catalog of Agricultural Plant Varieties” strictly indicates that it is growing on our black soil may be sold. Notice, we still do not consider how many grandmothers will lose their livelihood. We are talking only about what we will not find when we come to the market.

And in the supermarket we can not find products with the already familiar “Without GMO” stamp. The recommendations of the European Commission guarantee "the coexistence of genetically modified crops with conventional and subsistence agriculture."

But back to today's exporters. The defense industry, breathing its last incense, still living at the expense of foreign orders, after the signing of the Agreement may well lose its internal state order. The tenders for the supply of law enforcement agencies must be attended by firms from the EU.

Another strict requirement for Ukraine is the “Railways Development Directive”. It, in particular, provides for the elimination of the state status of Ukrzaliznytsya and, thus, an increase in transportation tariffs due to the termination of subsidies from the state budget. "The development of railways" includes the implementation of the Directive "On the compatibility of railway systems within the Community". I remind you that the width of the railway track is 1520-mm. In Europe - 1435-mm. The total length of Ukraine’s railways is over 30 thousand. They are driven by 139,5 thousands of cars and 6,1 thousands of diesel locomotives, electric locomotives, diesel trains. And they are far from one wheel pair! Where to get money to replace all this?

Yes - I agree with Mr. Tolstov (one of the participants of the conference - VU.) - in 1990-s huge funds for structural changes in the economy were indeed infused into future EU members. But times are changing, and the once thriving European Union, according to the speaker of the European Parliament, Martin Schulz, has been a bankrupt for a year now, unable to finance its own programs. And Ukraine, I remind you, cannot even count on membership.

Ask why they need us then? Here is one of the answers: "For used clothes and other used items that are within the Ukrainian customs code 6309 00 00, Ukraine will eliminate customs duties on imports." That is, in order to sell used things, finishing off the Ukrainian clothing industry. Indeed, in conditions of mass impoverishment, many will prefer high-quality and cheap new and expensive.

During the 4-5 years, Ukraine should also implement the entire corpus of European standards as national ones. This is more than 20 thousand standards - from the location of light bulbs, sockets, the type of road signs and "zebras" at the junction to the thread pitch of nuts and bolts. Of course, Ukraine should refuse not only national standards, but also withdraw, as inappropriate to European, interstate, operating within the framework of the CIS. This means that no Ukrainian company will be able to supply products to the Customs Union, where many Soviet GOSTs are now being revived.

Difficulties for Ukrainian business will bring, and it would seem, such harmless European bylaws (which, according to the Agreement, will become law on the territory of Ukraine), such as, for example, the “Directive on the structure of design requirements in accordance with environmental principles of energy regulation when using materials. In accordance with In this case, the Ukrainian brick at the price of the 1 hryvnia may turn out to be inappropriate with European eco-design standards, and you will need to build from imported bricks, costing 5 euros.

But, the main thing is in the document, where, for example, phytosanitary control procedures are written in the smallest details, there is not a word about the regulations of the work of supranational bodies and the mechanism of their decision making. However, the fact that the representatives of the EU are numerically superior to them indicates that the voice of the Ukrainian side will in no way influence the decisions made. Moreover, Ukraine does not have the right to challenge the conclusions of the "European brothers", because, according to article 475, "the decision adopted by the relevant established authority ... should not be disputed."

The so-called Ukrainian patriots say that joining the Customs Union is a loss of independence, so part of the authority will be transferred to the supranational body, in terms of the regulation of customs tariffs. But under an agreement with the EU, Ukraine must ensure that it brings all legislation into line with EU legal acts. Moreover, any newly adopted document of the European Commission, the Council of Europe, etc. should be immediately implemented in the legislative system of Ukraine. The Agreement clearly states: "Ukraine must ensure that at the end of the relevant period of time, its legislation will be fully compatible with the adopted EU legal acts." Guarantee! Contrary to the Constitution.

And I ask you to pay attention, if the future EU members from Eastern Europe performed similarly, having guarantees of acceptance into the European Union, then Ukraine’s acceptance is not even discussed. Moreover, since this voluntary self-torture is calculated under the Agreement for ten years, then, therefore, before this time even the question of associate membership will not be raised. And from the meaning of the Agreement, it follows that these 10 years are only the first phase of the "convergence".

Thus, it can be argued that the negotiating group headed by Deputy Economy Minister Valeriy Pyatnitsky in negotiations with the EU voluntarily liquidated the sovereignty of Ukraine. A document in which one party is endowed exclusively with rights, and the other with only obligations, and under the penalty of punishment undertakes to live according to the rules of others, cannot be called a cooperation agreement. This is the "Act on the recognition of Ukraine's colonial dependence on the European Union."

Ctrl Enter
Noticed a mistake Highlight text and press. Ctrl + Enter
We are
A great interview with Sergey Lavrov: about Ukraine, Obama and IranWhat you didn't want to know about England
147 comments
Information
Dear reader, to leave comments on the publication, you must to register.