Vatican and the "new world order" 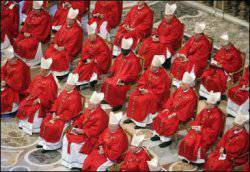 Pope Benedict XVI abdicated the throne in the year, he officially proclaimed himself the Year of Faith. The election of the new pope is an event much more meaningful for the fate of the world than can be learned from the media. It’s all about the real, extremely low-lit role of the Vatican, the largest stories an owner, a monopolist of knowledge in the Western world, and one of the world's oldest political actors actively pushing globalization processes. For example, it is almost not known that the idea of ​​creating a European Union belongs to the Holy See, which regarded it as the first stage in the creation of the World Union. 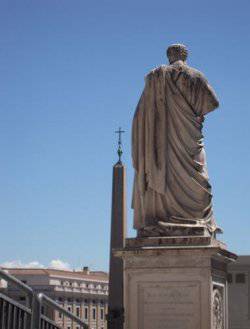 A spokesman for the Vatican almost immediately denied information about the health of the pope as the reason for his resignation. The Italian experts agree with this, reminding that the previous Pope John Paul II remained in office until the end, being in a much worse physical condition. The same experts point out that the real reason is not health, but internal contradictions between the Vatican groups, which Benedict XVI failed to resolve.

Today, the Vatican is the ideological center of the “new world order”. The second, financial, center is represented by the City of London. The third, political, center is located in Washington DC ... Every element of this triad, a mini-state in a state with its own flag, government, etc. And very remarkable are the buildings in the center of the Vatican - the tall, almost 300-ton ancient Egyptian obelisks in honor of the highest Egyptian deity and the “creator of everything that exists” Amen-Ra. 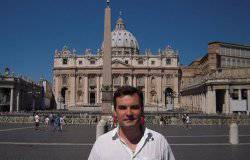 Especially originally one of these pagan idols looks at the main entrance to the Basilica of St.. Petra in the center of the Catholic world

Joseph Ratzinger, who ascended the papal throne of 19 on April 2005 of the year, became the first German father in the last almost 1000 years. And the oldest dad in more than 200 years. The “Old Guard”, consisting mainly of Italian cardinals, having a majority in the conclave, expected his rule to be short, “transitional”. However, expectations dragged on for 8 years. The "old man" was not only tenacious, but also a tenacious politician. This is supported by the mutually exclusive interpretations of his personality in the media.

• As a traditional conservative who defended homosexuality and a “conservative” who led the structure that had succeeded the Inquisition for almost a quarter of a century.

• As a liberal, ideologue of ecumenism since the time of the Second Vatican Council (1962), in which young J. Ratzinger played a key role in overthrowing his ideological opponent of the last Grand Inquisitor Alfredo Ottaviani and reducing the status of the Inquisition to the position of a simple congregation.

For several years, this ambiguity allowed J. Ratzinger to maneuver, depicting the “transitional” father, between the Vatican “conservatives” who are not interested in changing the financial and political status quo, and the “liberals” who are ready to “modernize” church life and even Holy Scripture.

By the end of 2000's space for maneuver left. Benedict XVI ceased to suit many. And his younger, like-minded people according to the precepts of the Ecumenical Second Vatican Council, whom he began to appear too conservative. And their opponents, who began to seem almost revolutionary. Moreover, those and others had enough formal reasons for discontent. To take only one fact - during the pontificate of Benedict XVI in his native Germany, the Catholic clergy lost 350 thousand congregations. However, reducing everything to intra-Vatican intrigues only means simplifying the situation too much. 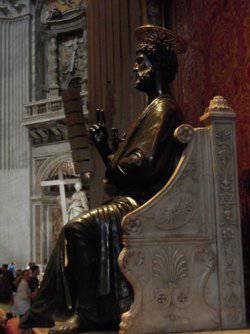 The unprecedented pressure on the "overdue" pope is inseparable from the massive information attack on the Vatican, the beginning of which can be considered the publication in D.Nucci of 2009, the book “Vatican LLC”. On the basis of almost 4 thousands of secret documents, it uncovers illegal operations and secret money laundering schemes of the Italian mafia, major politicians and businessmen by the most closed structure of the holy throne - the Institute for Religious Affairs, known as the Vatican Bank.

For the first time, a strict measure was applied against the Vatican Bank in the form of imposing arrest on part of the money, a criminal case was initiated against the director. In 2010, a powerful blow to the image of the Catholic clergy struck the public disclosure of the numerous facts of child abuse committed by German clerics in 1960-1970. (The Vatican was forced to admit the facts of child abuse, which led to a massive rupture of German Catholics with the Roman Church). In 2011, lawyers for the victims of violence of pedophile priests (in the US, more than 3, thousands of Catholic priests are accused of sexually abusing children), filed a lawsuit at the International Tribunal in The Hague demanding that the head of the Roman Church and the three main hierarchs of the Vatican be tried "for crimes against humanity in the form of complicity and covering up of sexual abuse of priests for children ”(Goodstein L. Abuse Victims Court / Prosecute the Vatican / / New York Times, 14.09.2011). In the same year, the scandalous and tough “Habeus papam” (“We have a Dad”) movie world-wide was released. In the center of the plot is a cardinal trying to escape from the Vatican after being elected pope and abdicating the throne at the end of the film.

In October, 2012 of the year ended the trial of Paolo Gabriele, the butler of the Pope’s absolute confidence. He was convicted of imprisonment on 1,5 after being found guilty of stealing confidential letters, financial reports and other secret documents of the pontiff, a small part of which formed the basis of an even more sensational study published last fall, signed by D. Nucci, His Holiness. The Secret Documents of Benedict XVI. ” The book, which demonstrates the inner kitchen of the pontiff himself and his vulnerability to external forces, called for greater "transparency" of the Holy See and provoked another scandal, called the Vatican press secretary "Vatilix".

At the same time, most of the stolen documents have not yet been published and are still in the hands of an unknown customer (according to American journalists, they may be Cass Sunstein, former head of the Information and Communication Regulatory Section of the Washington White House, who also seeks greater Vatican transparency; the head of this department is called the “information king” of the Obama administration). As the investigation progressed over the Pope’s butler, the Vatican’s chief geek disappeared without a trace, holding in his hands all the “virtual” contacts, databases, and access codes to the computer system of the Holy See, considered to be similar to the systems of the US special services ...

Interestingly, the main waves of information attacks on the Vatican coincided with the calls of Benedict XVI to create a global governing body. What is this structure and why should it be controlled by the “vicar of God on earth", described in the third encyclical of Pope Caritas in Veritate, published on July 7 of the year 2009. In this 150-page message, for the first time devoted to social issues, the pope called for the creation of a “global political power” for the sake of “improving the economies affected by the crisis.” A year later, the Vatican began to actively promote the idea of ​​the World Central Bank in order to create a “supranational authority” of a global scale.

3 December 2012, in a speech delivered at the Pontifical Council, Benedict XVI again called for "building a world community with the appropriate powers", for the creation of a super-state and a worldwide supranational governing body. Literally two weeks after that, according to the Italian la Repubblica, two 300-page investigations on top clerics convicted of homosexuality and embezzlement of the Vatican lay on the table of the Pope. After becoming acquainted with these materials, my father allegedly decided to leave his post that very day ... 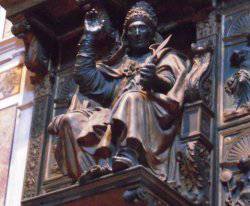 Recently, in the American media, information was announced that officially the Benedict’s abdication was announced a few days after the Vatican received the unnamed European state of a diplomatic note from the Vatican February in which it expressed its intention to issue an arrest warrant for J. Ratzinger. At the same time, news agencies reported on negotiations with the Italian authorities and on the decision of Benedict XVI to live after the abdication in the Vatican and that they received guarantees of the security of his private life and legal protection in the event of a prosecution attempt. 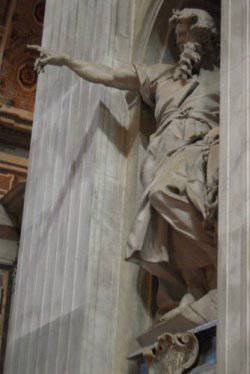 In part, the model of the abdication of Benedict XVI resembles a performance of 143-year-old, played out under the dictation of the Rothschilds. Then the result of the action was the deprivation of the pope of secular power, and the Vatican of the Papal States, and at the same time the acquisition by the Pope of a blank check for the "modernization" of Christianity. Today the global ideological power of the Vatican sovereign is at stake. The main choice that will be made these days in the Vatican is not a black / fair-skinned or European / non-European pope. The question is about:

1) Will the Vatican be able to overcome the deep crisis of the institution of papal authority and the Catholic Church in their inability to resist the mass de-Christianization and oskotinivaniyu congregation and clergy and remain a sovereign state under the authority of the papal curia? An indicator of this will be the preservation of control over the Vatican Bank, which is not the official institution of this state, but the pontiff's bank, still remaining in a certain sense its sole shareholder, which fully controls the bank through a commission of five cardinals.

2) will the pontiff's mission be reduced to the purely ideological propaganda of the “new world order” and the issuance of quasi-religious sanctions to strengthen it? The indicator is a possible joke on the election of the pope of the "racial card" and the transfer of the financial structures of the Vatican to the control of supranational banking structures seeking to dismantle the institution of the state as such under the banner of fighting corruption.