Ukrainian sailors returned from a campaign on a Russian submarine 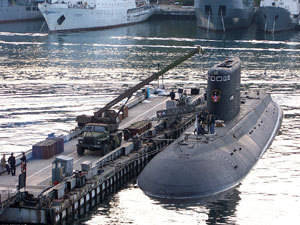 Minister of Defense of Ukraine Mikhail EZHEL thanked the sailors of the Black Sea fleet Russian Federation for the opportunity for Ukrainian submariners to have internships in Russian submarines.

According to an UNIAN correspondent, answering a question from journalists in Sevastopol after visiting the “13 th shipyard of the Black Sea Fleet of the Russian Federation” and the submarine Zaporizhzhya, which is being repaired here, the minister said that training the crew of the Zaporizhzhya submarine in parking conditions, except for some In particular, the electromechanical warhead is of a virtual nature to a certain extent, and the preparation itself is carried out where there are operating mechanisms.

He added: “Only literally on Saturday the future commander of the ship, as well as the commander of the electromechanical warhead, other officers (the Zaporizhzhya submarines) returned from a voyage where they trained on a submarine of the Russian Black Sea Fleet (Alrosa).