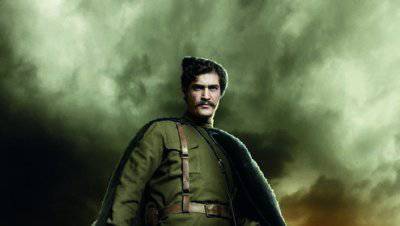 Dear readers! Probably many of you have already read the multiseries TV movie “Chapay Passion”. And some - and with emotional reviews of this film. The main claims of the reviewers to the authors are to continue the ideological course of 90 for rokompot (that is, Russia-which we have lost) and anti-Soviet. The film is even accused of the fact that it is another enemy propaganda.


But in fact, this work is not enemy propaganda. It is worse.

About the artistic series "Chapay Passion" it would be right to say the following: the film itself is just as illiterate, fake-minded, as its name is.

That is, just as citizens who had not learned enough, having watched Tarkovsky's film "The Passion for Andrei", decided that this expression meant "The Exciting Adventures of Andrei", and not "The Passion of Christ as narrated by Andrei," historical sources who read Wikipedia at best.

And the rest of the space is crammed with the usual serial hack. That is, the authors reached the nearest stamp or the nearest subject “approximately on the subject” - and popped it into the frame.

... In the office of the chief of the Cheka there are chairs from the nearest "Coffee House". On his desk is a vintage 1960-x lamp from a nearby club. The Red Army men are walking in suits, cropped in the nearest dressing room about Civilian - do not care that they could not be dressed like that in the described period. The demon of the revolution, Trotsky, with a huge wax nose, behaves as if information about himself was drawn from the literature of the “Memory” society. And when, in response to his order to surrender command, Chapaev (a professional military man, by the way) begins to cry that his legs were wiped out, and to quote the Golden Calf, written by 10 years later, on the subject “Academies have not finished” - it’s not that even laughs, and fiercely boom, like some kind of psychopath.

Why? And because the most primitive demonic personality in the view of serial lazhemetchikov looks like that.

Why does Chapaev thump up and run after the women like mad, and these women — all as one in hysterics? Because the series, to think once, it is necessary to cut the loot, let's African passions about drunk Russian debauchery.

Why does Chapaev seem to be like a peasant from under Cheboksary, but speaks like a graduate of GITIS? Damn, but because he is a graduate, a serial workaholic, he has no time to retrain for peasant talk, he needs to cut the loot, and in the evening he will play with the same voice of an honest investigator.

Why, by the way, is the language of the heroes not even pretending to be the national language of a century ago? But because the screenwriter, about whom we are going to talk separately now, has no time to be credible. He has two more shows for the year, about Stalin and about Peter Leshchenko.

Why is the Cheka still just being born, and already nothing human, rapes everything, hits blood and shoots? And because it’s in all TV shows, I think this forever sexually preoccupied shaved-headed Chekist, who can only crave other people's women, shoot men at a flaky wall and beat real heroes in the balls, is always performed by the same actor.

Why does Commissioner Furmanov shoot Chapaev in the back? But because in the series the love triangle has to be intrigue, and a jealous commissioner is the same stamp as a lustful Chekist.

Why did they decide to make a film about Chapaev? And what, the untwisted brand and is bad.

... Now - about the main responsible director of this impassable lazhi is Sergey Shcherbin, and before that he had shot the TV series “Russian Double”, “Loner” and “Highway Patrol 2”, unknown to me. And the writer of this impassable lazhi is Volodarsky Edward. And over the past decade, he has presented us with such hellish breakthroughs in Russian art, such as Ordinary Bolshevism, Inhabited Island, Shtrafbat, and Life and Fate.

And last year he died.

But, despite his death, this year we will have two more shows on his scripts:

1) "Peter Leshchenko". Since the singer P. Leshchenko was sitting - there is no doubt that shaven-headed security officers would beat him in the balls, and a lot of him, the Leschenkovskys, would fight women in hysterics.

... And all this is not only because Edward Volodarsky, who died in the 72 year of life, like all the creators of his generation who were carefully nourished by the Soviet regime, was a stupid anti-Soviet.

He was hardly him when he wrote scripts for “His among strangers”, “Check on the roads” or “Ivan Lapshin”.

It’s just that a lot of water has flowed since then, and the creators, who have thoroughly traded themselves and turned, acquire something like an indifferent creative frigidity.

That is, all learned movements are repeated, but completely without taste and without involvement.

Therefore, the actual national history in the film "HRO" is about the same as the ancient history in the French classicist play from the life of Arcadian shepherds and naiads.

She, the story, there is presented in the form of several stilted characters from the "comedy del arte" of the anti-Soviet era. Tragic Hero-Lover - once; Merry, and at times the Evil Crowd - two; Lustful Chekist - three; Jealous Commissioner - four. Desperate to Kill a Russian White Officer - five.

At the same time, it is clear, by the way, that this time the leadership who felt the change in the wind (either the studio or the channel) explicitly asked the screenwriter and director not to go too far with the White Chimera. That is, do not overly breed admirals and ruddy gymnasium students, do not whip up the crunch of the pre-revolutionary French loaf and do not divide the sides into officers in white and unshaven sailor. In order, so to speak, to achieve historical reconciliation.

But the creators understood in their own way. That is, they grunt - and instead of devout white 1990's, they pulled out of the naphthalene brutal royal Cossacks from Hollywood musicals about pogroms. Apparently, they wanted to balance.

That is, because of what these two kinds of negative Russians are fighting - from the picture can not be completely disassembled.

... Well, and more. All this terrible crap, I mean "Chapay Passion", to the masterpiece of the Vasiliev brothers "Chapaev" has the same attitude as to the "Passion according to John" by I.S. Bakh.

Ctrl Enter
Noticed oshЫbku Highlight text and press. Ctrl + Enter
We are
Dmitry Puchkov: You can’t defeat someone’s propaganda - organize and lead your own.Tales of Chapai ... or how history is ridiculed
Military Reviewin Yandex News
Military Reviewin Google News
74 comments
Information
Dear reader, to leave comments on the publication, you must sign in.