January 30 2013
34
At the beginning of the week, on the basis of the Decree No. XXUMX of the President of the Russian Federation, Ramazan Abdulatipov was appointed acting head of the Republic of Dagestan. At the same time, Magomedsalam Magomedov, who led the republic from February 44, lost his post. It is reported that Magomedov left his post at his own request, although rumors about his possible resignation began to slip in the Russian press a couple of weeks before official reports about this event. As a result, Magomedov and Abdulatipov exchanged cities: the first was transferred to work in the presidential Administration in Moscow, and the second went to Makhachkala to start their new activities. 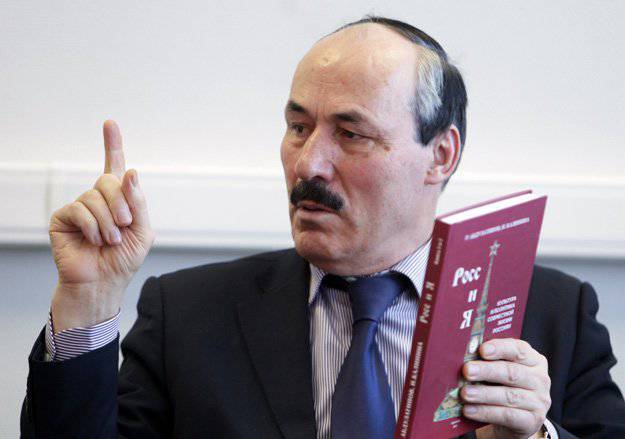 On the photo - Ramazan Abdulatipov

With all the responsibility we can say that the new post of Ramazan Abdulatipov is a serious test for the 66-year-old politician. With all due respect to the personality of Ramazan Gadzhimuradovich, as well as to the personalities of his predecessors as Dagestan leader, it is worth noting that so far not a single head of Dagestan has succeeded in solving the main republican tasks with high efficiency. It cannot be said that none of the previous heads of the region tried to solve these problems, but these attempts clearly did not achieve the proper result. If someone has other considerations on this subject, today it is enough to look at dry statistics that can shed light on the situation in Dagestan.

These data indicate that Dagestan today is one of, let's say, depressed regions. With a high birth rate, there are serious economic and political problems. According to official data, the unemployment rate is about 12,9%, which is more than two times higher than the average unemployment rate in Russia. Dagestan is not among the regions in which there is an active investment. The republic is one of the last places in terms of foreign investment. Dagestan has a budget deficit, which is covered by federal subsidies. The volume of industrial growth remains very modest, even despite the fact that the Republic has everything necessary for a real production boom.

Economic instability, the lack of a sufficient number of jobs and many other factors lead to the fact that Dagestan has recently become one of the most dangerous for living regions of Russia. In 2000-x, he intercepted a bloody "palm" of neighboring Chechnya, becoming a stronghold of terrorist organizations of various directions. The intelligence services of the republic literally daily report on the destruction of the next gang of the group, but the number of extremist associations in Dagestan is not reduced. The so-called “forest brotherhood” consistently receives “fresh blood” from Dagestan youth, many of whose representatives find “consolation” in the tenets of radical Islamists, who are trying to incite entire sections of the population against republican and federal authorities. It is necessary to recognize that while they succeed in this, and in order to counter this, it is necessary to exert maximum efforts.

It is obvious that Ramazan Abdulatipov understands perfectly well what difficulties he will have to face in his new position. And until he becomes a full-fledged president, he has time to think about how he will bring Dagestan out of its current, very deplorable state. On this score, the ex-deputy himself and the ex-ambassador of Russia in Tajikistan said that he was coming to Dagestan to eradicate theft and corruption, and at the same time restore the rule of law. It is worth noting that these are very loud words, and to translate them into reality, politicians will have to sweat. Will those clans that managed to divide the Dagestan pie give the opportunity to deploy their activity machine to Abdulatipov? - The question is extremely serious.

To say that Abdulatipov, who is one of the most respected people in the republic, will come, see and win, unfortunately, is clearly not necessary. That corrupt hydra, which literally tied Dagestan hand and foot, will obviously do everything so that the next Dagestan head also plays the role of a statistician, when behind his back the criminal would continue to get everything the soul is lying on "on a silver platter kayomochkoy.

Already today quite ordinary Dagestanis on the pages of one of the republican editions publish appeals to the acting. President of Dagestan. Abdulatipov himself, in his own words, will pay special attention to these wishes in order to form his own opinion about what ordinary residents of the republic today are deprived of. So, in one of the appeals to Abdulatipov, there are words about the main task of the new leader: the task of returning to the republic of the world - the peace of both inter-ethnic and inter-confessional, and the everyday world. However, the person addressing Abdulatipov says that peace cannot be established unless decent living conditions are created in the republic.

It’s hard to disagree. After all, today Dagestan is in a vicious circle, which is composed of two fundamental problems: the relatively low standard of living of the majority of the population and a fairly strong extremist underground. The first problem feeds the second, the second - stands in the way of the resolution of the first. And, in addition, the solution of these problems loses all meaning in the presence of total corruption.

Dagestan corruption is a phenomenon that, unfortunately, fits into the general Russian trend. Trade in posts, diplomas, tenders, rights to purchase land, and even ... "crusts" of people with disabilities. Official statistics show that Dagestan is among the leading regions in the number of people with disabilities (including “fake”) in 10000 residents. Residents of the republic often take a bank loan in order to obtain a document on their disability for several members of the same family at once. “Linden” disability, as Umaisat Magomedova from the Tsumadinsky district says, today is often the only way to survive in the absence of work. Survive on state benefits.

The detrimental situation when corruption crime at the top of the region gives rise to, so to speak, corruption crime in everyday life. Corruption breeds corruption, which leads to economic paralysis of the republic, which could become both a breadbasket, a health resort, and a blacksmith shop not only in the North Caucasus, but also in Russia as a whole.

It turns out that Abdulatipov, if he is not going to repeat the mistakes of his predecessors, should not seek compromises on the ground, but bend his line from beginning to end. But to say is one thing, to do is another. The same clan leaders obviously do not want to suddenly go on the rails of legitimate business, legal policy. After all, where there is a law, it is necessary to work, and who of the Dagestan "godfathers" is used to it. So say: Ramazan, you say that you need to start working honestly? Well, I do not! Dudka, Ramazan. We respect you as a person, but you also understand us, brother. We would have to collect the cream, and divide the cream between them, and you breed your philosophy here ...

Today, many media outlets are publishing materials on this subject, which boil down to the fact that Abdulatipov is most likely not the person who is needed in this situation for Dagestan. They say that it was necessary not to appoint a professor and a diplomat as an acting, but at least a combat general who would bring order to Dagestan with an iron hand.

So it would have brought? .. The combat general has been heading Ingushetia for more than four years, but so far, unfortunately, with an “iron hand” leading to economic prosperity, things are not the best here ... Without detracting from the merits of Yunus-Bek Evkurov, I would like to note that sometimes “combat generals” are powerless against the circumstances prevailing in the field.

In this regard, we will not get ahead of ourselves in the a priori assessment of Abdulatipov’s activity at his new post, and sincerely wish Ramazan Gadzhimuradovich good luck in his difficult task. Oh, not easy! ..