New sharp turns in the Oboronservis case: an agenda for Anatoly Serdyukov 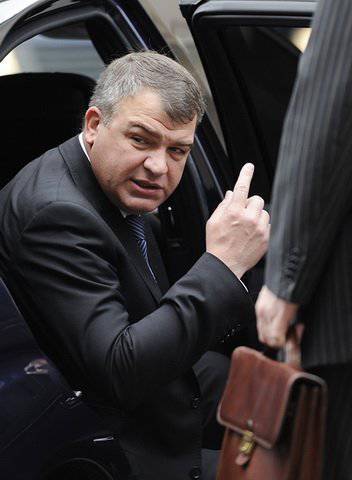 Our regular readers will say: “But what is this! Every day Serdyukov, then Oboronservis, then Oboronservis, and Serdyukov ”. Well, what can you do when the number of reasons to mention the ex-Minister of Defense and the departments under his control not only does not decrease, but on the contrary grows. We have here already begun to believe that the information wave associated with corruption in the higher echelons of power, according to the strange laws of the genre, will come to naught at the end of the year. But it was not there! Information bursts, which in some places resemble either newspaper “ducks”, or games of investigation, began to appear regularly in the media space of Russia.


One of these outbursts of information was the speech of the investigator for particularly important cases of the Investigative Committee of the Russian Federation Mr. Gharibyan not anywhere, but on the most "democratized" radio station - Echo of Moscow. Even before Petros Garibyan began his story about the investigative activities, the Echo listeners were bewildered and wondered what the representative of the RF IC did at their radio station, and what he might know and tell about the investigative affairs ... Now, if instead of Garibyan Someone more “competent” came - Garry Kasparov, for example, or Lyudmila Alekseeva with Mrs. Novodvorskaya, so that would be much more informative. And so ...

Obviously, realizing that being on a “democratized” radio station imposes its imprint on the invited guest, Petros Garibyan also decided to amuse the audience with very liberal statements - well, so that the radio receivers would not be thrown at the wall and the radio tape recorders out of their cars would not be pulled out of sinful business. The essence of the liberal statements of investigator Garibyan was that he decided to declare the possible involvement of ex-minister Anatoly Serdyukov in a corruption scandal around Oboronservis. As they say, suddenly! ..

All around, before Garibyan’s speech, they had already begun to think that it would not be possible to hear anything like this from the representative of the SC, but Garibyan dispelled doubts about the existence of internal democracy within the Investigative Committee ...

However, especially liberal students of the Echo of Moscow radio station and readers of publications who, in the blink of an eye, replicated the words of the investigator about the possible direct participation of Serdyukov in corruption schemes, did not have time to indulge in euphoria, did not have time for everyone else to think that in the corruption case we have all is not lost, as information from a somewhat different character came from the Investigative Committee.

After a very short time after the speech of Petros Gharibyan, the spokesman for the UK Mr. Markin (the one who recently appears on TV screens) was forced to take the floor. Vladimir Markin hastened to explain to the public, which had already begun to feel the smell of roast, that the words of investigator Gharibyan should not have been taken so closely to the heart. The fact is that Mr. Garibyan himself, it turns out, has nothing to do with the investigation concerning the Oboronservis case, and therefore his opinion is strictly private and has nothing to do with official information from the RF IC. In general, what Garibyan said about Serdyukov’s involvement in economic crimes when he was defense minister should be considered unrelated to the case file. Like this!

Based on this, it can even be assumed that representatives of the IC as a background of the investigative work still listened to the performance of their colleague on the radio station Ekho Moskvy, and as soon as his words were heard that Serdyukov could be guilty, they immediately muffled the sound of radio receivers they began to look around and quietly “sesmessi” Gharibyan, so that he would not get too absorbed by the liberality of the site where he was ...

At about the same time, when the frankness of an individual investigator reached a peak, it was reported that the embezzlements and “arrears” revealed earlier in the Ministry of Defense during the period they were run by Anatoly Serdyukov are not unique. Main Military Prosecutor's Office on its official website posted information on the opening of new facts of embezzlement of budget funds, which were supposed to be mastered by the Ministry of Defense. The facts of theft are related to the activities of such a company as “Security and Communication”, which in the last couple of months became widely known due to a series of corruption scandals in the main military department. Recall the company is headed by Mr. Elkin, to which the investigators and prosecutors have certain complaints.

According to the GVP, the office of Elkina was involved in the fact that about 288 million rubles were spent in excess of the norm for the cleaning and maintenance of the buildings of the Military Academy of the General Staff of the Russian Federation. The Department of Defense Ministry of Defense in the person of Mr. Trunin transferred the funds to the company of Mr. Elkin, which was supposed to serve the complex of buildings of the said facility. At the same time, it turned out that the transfer of funds took place precisely to the Security and Communication company, because the competitive principles were designated in such a way that the company headed by Yelkin and no other could fit the parameters specified in them. And as soon as the contract was concluded, “additional” outbuildings, ventilation networks and other objects, which were either not even mentioned or dismantled a number of years ago, began to appear in the buildings of the Military Academy.

The prosecutor’s inspection concluded that the commercial company was carrying out cleaning and maintenance of the buildings of the Military Academy of the General Staff at a price four times higher (at the time of 2010 of the year) than the price of similar services of the model of 2009 of the year. Either 400% inflation hit the department, or the academy began, excuse me, to walk under that kind of money ... In general, I identified the fact of GVP theft. Recall that this is not the first embezzlement associated with the name of Elkin, who, in addition to the company Security and Communication, was also directly related to OJSC Slavyanka (one of the structures of Oboronservis).
Only a very strange phrase was used by the prosecutor Fridinsky, declaring the criminal activity of Slavyanka OJSC. Here is a quote by S.N. Fridinsky:

“For the last two years, Slavyanka OJSC has surely turned into a tool for laundering budget money worth hundreds of millions of rubles.”

What do the words “laundering of budget funds” mean in this phrase? And really budget funds in our country are so cunningly earned that they also need to be laundered ... Let's hope that the prosecutor did make a mistake and should have used the phrase “to steal budget funds”.

Another information splash of recent times, which has made a lot of noise, is unverified information about the disappearance of former Defense Minister Anatoly Serdyukov. A variety of media ("Arguments of the week", Vesti.ru, NTV and many others), referring to information from a certain close assistant Serdyukov, said that Mr. Ex-Minister could leave the Russian Federation immediately after his resignation. Such information is allegedly confirmed by the fact that not a single mobile phone of Anatoly Eduardovich is responding, and his apartments are empty. However, such assumptions can hardly be called reliable information, if only because more recently, Ms. Vasilyeva asked the court to allow her relatives, relatives and friends, including the name of the ex-minister, to visit her “modest” girl’s nest in Molochny Lane. If we assume that Serdyukov went abroad immediately after his resignation, then it must also be assumed that he hadn’t informed Yevgeny Vasilyev about her departure ... Well, she didn’t expect him to come to her from abroad? ..

And if this or that person does not answer the calls of journalists and former colleagues at work, then this is still no reason to declare that this person is already that ... - he waved a cordon. It is, of course, behind the cordon today Anatoly Eduardovich, it might be safer (well, London, Vienna), but still the conclusions about his departure can be called unsupported and more similar to speculation. Although in this world nothing can be ruled out ...

In general, the end of the year gives Russia a unique action-packed series about the adventures of the former defense minister and his entourage. Well, if this “soap” goes according to all the laws of the genre, then the next step can be anything: from amnesia in one of the main characters to the emergence of new actors to replace the “tired” act ...

PS During the preparation of the material, the RF IC distributed information that Anatoly Eduardovich Serdyukov received a summons. On this agenda, he must 28 December appear in the Investigation Committee to testify in the case of theft in "Oboronservis." The lawyer of Anatoly Sedyukov (and he, as it turned out, already has a lawyer; and not at all ordinary) Heinrich Padva said that Serdyukov did receive an “invitation” from the UK. At the same time, Mr. Padva severely criticized the information that the ex-minister was allegedly outside Russia. Padva says that "Serdyukov was last seen today" (that is, on Thursday - author's note). In general, as expected, rumors of Serdyukov’s flight were greatly exaggerated. But the action is still ongoing ...

Ctrl Enter
Noticed oshЫbku Highlight text and press. Ctrl + Enter
We are
Ministry of Defense: from diamonds and paintings to a pile of garbage, or the Secrets of the investigation ...
Military Reviewin Yandex News
Military Reviewin Google News
149 comments
Information
Dear reader, to leave comments on the publication, you must sign in.