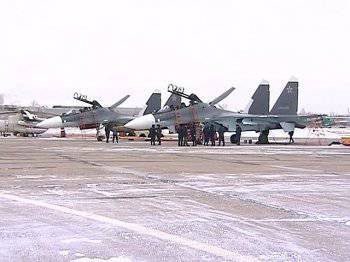 Irkut Corporation has fulfilled the current state defense order. This year, the company supplied the Russian Air Force 15 training aircraft of the new generation Yak-130 and two Su-30 fighters. In the next three years, the Ministry of Defense of the Russian Federation will receive from the Irkutsk aircraft factory more 85 new cars.

Typing speed in a matter of seconds, the plane lifts off the ground and almost vertically goes into the sky. Although this happens almost daily on the runway of the Irkutsk Aviation Plant, this is the first batch of vehicles for the Russian Air Force. Here, more and more planes take off and go to duty stations.

Yak-130 - training and combat aircraft of the new generation, which can simulate the behavior of other types of machines in the air. When training pilots today, he is indispensable. In one of the shops it is being assembled - the tail part of the fuselage, the bow is alternately joined, air intakes and hoods are installed. Already after - fit, so that all the details fit perfectly into place. The process is carefully monitored. Denier Bytsko, a collector-riveter, says: "We work, in principle, closely, but no one interferes with each other. Everyone knows their operation, they know when to approach. Everything is worked out to the smallest detail."

But the main direction is the production of the super-maneuverable Su-30CM fighter. Over the past 20 years, such aircraft in various modifications of the plant delivered to several foreign countries at once, but today the main customer is the Air Force of Russia, which is half of the total number of orders. At the factory, mass production has been established, so the aircraft will arrive not as single copies, but as whole squadrons.

Final assembly shop. It is from there come already fully assembled cars. Next, the fighters are sent to the first tests and painting, and only then the planes are transferred to the customer.

Su-30M - super-maneuverable fighter capable of simultaneously detecting and hitting multiple targets. Pilots who have already managed to sit at the helm of a new car, came to the conclusion that it flies even better than a bird, allows you to dream and make previously impossible maneuvers. Alexander Kharchevsky, Head of the Military Training and Scientific Center of the Air Force of the Russian Federation "Air Force Academy named after Professor N. Ye. Zhukovsky and Yu. A. Gagarin" states: "This is a new era in piloting when an aircraft can fly not only with normal direct and negative overloads but also with the side ones. That is, the requirements for pilots are increasing. "

Every time those who took part in their creation gather to send planes to the duty station. The collectors, although they spend most of the time in the workshop and more often see planes on the ground, call their work creative. They assure that the romance in it is not less than that of the pilots. Yuri Borovikov, the head of the aggregate assembly shop, admits: "You always look at how a plane takes off, and this feeling comes from childhood."

Today, the plant’s capacity allows both export orders and a Russian contract to be fulfilled simultaneously. In total, the company will supply 30 fighters and 55 combat training aircraft. The last cars from this consignment will arrive at their airfields in 2015.