Test of the North Caucasus on the economic viability, or the Day chairs - in the evening money 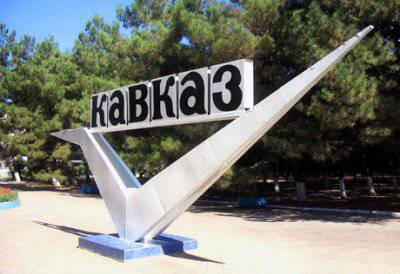 The state program for the development of the North Caucasus is taking on new forms. If a couple of years ago we witnessed that the money in very substantial volumes went towards the North Caucasian regions and did not work everywhere in the right direction, now the Government decided to slow down and take a closer look at how effectively the allocated funds are spent. . Peered, of course, before, but now tried to look, as they say, with an armed eye.


And if we talk about the absolute figures of state financing of the North Caucasus Federal District (NCFD), consisting of 7 subjects of the Russian Federation, then after analyzing the results of studying the expenditure of funds, these figures decided, as they say now, to optimize in the most serious way. If in the 2011 year it was said that the North Caucasus Federal District will receive about 2,6 trillions of rubles from the state treasury over the next several years, then since the government rearranged the amount of state funding of the North Caucasus began to be called others. For example, about six months ago, the sum of 1,7 trillion rubles sounded, 424,2 billion of which was planned to allocate already before 2015 year. However, at a recent meeting of the Government of Russia it was stated that there were too many of these funds, and therefore a proposal was received to dwell on the amount of money. 235 billion rubles, but not before 2015, but before 2020. At the same time, the Presidential Plenipotentiary in the North Caucasus Federal District (he is also Deputy Prime Minister), Alexander Khloponin, said that the lion’s share of funding should be private capital. According to the plans of the Government of the Russian Federation and Khloponin himself, the North Caucasus should increase by 90% precisely on the basis of private capital. And the promised trillions from the budget can still reach the North Caucasus Federal District, but only after the 2020 year. Why exactly after 2020 of the year, and why “can walk, can not walk”? - none of the members of the Government of Russia didn’t explain at length, but we already and so perfectly understand the reason for this decision.

The fact is that the Russian North Caucasus is a very specific region. You can call it problematic, but at the same time such a definition is the mildest of those that could be picked up for the North Caucasus Federal District. There are plenty of problems here: from unemployment and a number of unresolved social issues to the often manifest shoots of extremism. However, many problems, unlike some other regions, have not been solved for many years. No - not that they would not be solved at all ... They try to decide, sort of, but only often either in a very peculiar way, or, resting their forehead against the wall. As a result, many regions of the North Caucasus Federal District, even with very impressive funding from the federal center, demonstrate, to put it mildly, not at all outstanding figures.

In addition, between individual North Caucasian subjects there often arise peculiar disputes in absentia about why Moscow allocates more to one and less to others. For example, after billions of dollars from the federal budget were spent on rebuilding the Chechen Republic: building housing, infrastructure facilities, creating new jobs, a certain “envy” arose from the neighboring regions, primarily Ingushetia and Dagestan. Like, why is it Kadyrov - everything, and we - nothing. And although the term “nothing” was clearly inappropriate, but in this way the leaders of the North Caucasus regions did not care much. Some North Caucasian publications made it clear in no uncertain terms that the federal center needs to move on to providing “more tangible” financial assistance to precisely those regions that these publications represent. In particular, the publication “Dagestan truth” in its economic section cites the following phrase:

"Hydropower (Dagestan - author's note), along with the agro-industrial complex, the tourism cluster and the education sector, have the right to expect financial assistance from the federal center today."

The issue describes in detail the commissioning of the Gotsatlinskaya HPP and other hydropower projects, which are already bringing substantial revenues to the local treasury.

Of course, there is nothing reprehensible in such very peculiar appeals for funding: as they say, people are cheering for their region. But only the federal center is not in a hurry to make new billions of transfers. Why? Because the economic efficiency of such centralized financing is often close to zero. Even substantial profits sometimes settle in the pockets of local officials with enviable regularity.

In particular, after a series of checks conducted by the Accounts Chamber of the Russian Federation, Dmitry Medvedev openly stated that a large percentage of funds allocated for the needs of the North Caucasus Federal District are simply being stolen. According to Medvedev, “the money simply does not reach people, and the question arises, where do they (means) go?” But Medvedev asked such a question, being the head of state. After the rhetorical questioning of Medvedev to his current post, Alexander Khloponin was appointed to solve numerous North Caucasian problems and answer the question of where the money goes ... In January, 2013 will be equal to exactly three years since Khloponin took the chair of the plenipotentiary President of the Russian Federation in the North Caucasus Federal District, but so far the results of his work are more than modest.

Of course, one cannot say that in just a couple of years under such specific working conditions, an official should certainly achieve outstanding results, but the fact that it is necessary to intensify development activities in the North Caucasus is an obvious fact. However, it is at such a moment that not the best news for the permanent representative Khloponin. The fact is that it is much easier to report on the success of a region (district) in the case when multi-billion funding comes from the federal center constantly and without any reservations on time and preventiveness. But now, according to the latest decisions of the Government, the funding of the NCFD is cut down to 2020 almost ten times! Obviously, this is for Khloponin, and for all the heads of the North Caucasus regions, the real test. Moscow in this case gives a very unambiguous message: if centralized investment in the North Caucasus Federal District in most cases does not lead to tangible positive advances, is it worth continuing to throw money into a black hole? ..

If so, then now Khloponin, Kadyrov, Magomedov, and other officials in the region will have to prove (if they are ready for this, of course) that the North Caucasus is not a black hole at all. And to prove this thesis will be oh how difficult ...
That is why Khloponin says that he is going to see 90% of the region’s development financing in the form of private capital. But words about the benefits of private capital do not always fit with the desires of private investors to invest in risky enterprises. While the North Caucasus projects, so far with all our desire, cannot be called stable; unfortunately. Regret in this regard becomes even greater, given the enormous potentials of the North Caucasus regions. Only one tourist area is worth: ski resorts, health centers, natural parks and much more.

By the way, the tourist cluster was singled out by the Government of Russia as a priority funding area. In other words, the Government is trying to fully finance the sphere that can attract both tourists and private business to the North Caucasus. Demonstrate, let's say, the Caucasus in all its glory - as much as possible today. Apparently, the idea is approximately the following: the federal budget carries out a kind of PR-action (in a positive sense) of the North-Caucasian Federal District, and on the basis of this, local authorities must do everything so that this PR-move does not work uselessly. One of the positive steps from such an action could be the creation of new jobs, because unemployment in the North Caucasus Federal District is the highest in Russia. If on average in Russia (according to reports of Deputy Prime Minister Olga Golodets) unemployment is about 5,2%, then in the North Caucasus Federal District it reaches 16-17% - by the most modest estimates.

Alexander Khloponin was not slow in stating that he was going to bring the unemployment rate in the North Caucasus to at least 10% (on average) in the near future. I would like to believe that he has sound ideas in this regard.

It turns out that the North Caucasus decided to try to launch a free economic voyage with the minimum possible correction from the federal center. And if the NCFD passes this challenging exam, then large investments will not be long in coming. But in order to pass such an exam, the authorities of the regions of the North Caucasus Federal District will have to abandon their dependent position and roll up their sleeves for intensive work. Are they ready for this? - Big question.

We are in Yandex Zen
130 comments
Information
Dear reader, to leave comments on the publication, you must to register.