December 18 2012
49
Relations between Russia and the NATO bloc continue to be one of the most pressing international topics. Despite the end of the Cold War and the constantly declared cooperation, there is still a long way to final reconciliation and there are several serious problems on the way to it. Among other disagreements, the Treaty on Conventional Armed Forces in Europe (CFE), concluded as early as 1990, is seriously highlighted. Since its conclusion and ratification, a number of not very pleasant events have occurred, as a result of which the balance of forces in Europe has seriously changed. After the collapse of the Warsaw Pact and the USSR, several new states appeared in Europe, some of which soon became part of the NATO bloc. As a result, the former parity in relation to the armed forces has changed significantly, and not in favor of Russia. 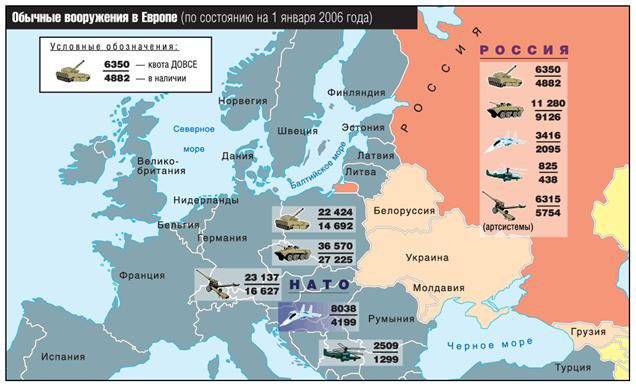 It is worth noting that several attempts were made to remedy the situation by making adjustments to the terms of the contract. However, the reluctance of NATO countries to agree with any proposals from Russia ultimately led to the decision in 2007 in our country to suspend participation in the CFE Treaty. This event was preceded by a so-called. Agreement on Adaptation of the CFE Treaty. In the 1999 year, 30 states (NATO countries, the CIS and several European countries) signed a document according to which the quotas for the number of conventional weapons were changed, taking into account the accession of several countries of the former ATS to NATO, as well as in connection with the collapse of the Soviet Union. However, the new version of the CFE Treaty was ratified by only four countries: Russia, Belarus, Kazakhstan and Ukraine. The rest of the countries decided to use the Adaptation Agreement for their own purposes. For example, Georgia and Moldova refused to ratify it as long as the Russian troops are on their territory (in the de facto independent South Ossetia, Abkhazia and Transnistria). For these difficulties of international relations, the North Atlantic Alliance "seized upon" and also did not ratify the renewed treaty.

Another characteristic feature of modern regulation of the number of weapons in Europe are “free zones” - countries that do not participate in the CFE Treaty. These are the three Baltic countries that are both members of NATO at the same time and do not sign the CFE Treaty. A special interest in their status is added by the fact that representatives of Latvia, Lithuania and Estonia after accepting these countries to the Alliance regularly participated in the NATO commissions checking for compliance by Russia with the terms of the treaty. In general, one could not pay attention to the Baltic countries. Their armed forces, mostly equipped with Soviet-made equipment, pose no danger to Russia or Europe. However, Latvia, Lithuania and Estonia are now members of NATO, which creates corresponding risks. Simply put, because of the non-participation of these countries in the CFE Treaty, the other states of the NATO bloc have an excellent opportunity to build up their forces in Europe, without conflicting with any agreements and arrangements. Since the Baltic states do not have quotas for conventional weapons, then it can accommodate as many vehicles as they like, and this directly threatens the security of Russia and other countries that ratified the Agreement on Adaptation.

Soon after the adoption of the Baltic countries into NATO, Russia's quite expected reaction followed. Our country demanded that these countries sign and ratify the CFE Treaty in order not to create unnecessary tension in the region. Equally expected, Riga, Vilnius and Tallinn refused to sign. As a result of all the events surrounding changes in the conditions or status of the treaty, Russia was forced to suspend its participation in the arms treaty in Europe in order to preserve its own security. In addition, soon after the start of the moratorium in the hands of NATO, another political "trump card" in the form of South Ossetia and Abkhazia turned out to be recognized as independent or occupied by Russia depending on the political needs of the bloc countries. Naturally, while NATO does not recognize the independence of these two small countries.

In general, the situation around the regulation of the number of weapons in Europe is far from a complete solution. The relevance of this issue is also increasing due to the fact that the NATO bloc and its allies actually surrounded Russia from all sides, and this requires appropriate responses. Our country, re-equipping its army, continues to attempt to solve the problem diplomatically. So, one of the first announcements of the new Russian representative to NATO, Alexander Viktorovich Grushko, appointed to this position in October, was a proposal to start all negotiations anew, from scratch. In addition, Grushko showed the need to negotiate without any political "back thinking" and without reference to political problems.

It is unlikely that in the near future there will be any major shift in relation to arms treaties in Europe. The fact is that the NATO bloc is also quite satisfied with the terms of the Agreement on Adaptation of the CFE Treaty of 99. However, Western countries are prone to a specific interpretation of this document. They demand that Russia withdraw its troops not only from Georgia - and this has already been done for a long time - but also from Abkhazia and South Ossetia. Additional problems in the negotiations may also arise due to the fact that the independence of these countries was recognized only by one European state - Russia. As a result, a wide range of interpretations of the terms of the Agreement opens up for NATO representatives. Disagreements on such seemingly small issues can cancel all plans for a successful and mutually beneficial conclusion of the disputes over the CFE Treaty.

Meanwhile, the NATO leadership, represented by Secretary General A.F. Rasmussen expressed satisfaction with the results of international cooperation with Russia for the year approaching 2012, and hopes for further development of these relations. The cooperation program for the next 2013 year has already been prepared and adopted. Judging by the current state of affairs, the new plans of NATO do not contain any steps that are beneficial for Russia with regard to the regulation of the number of troops in Europe.