US in search of the culprit for the release of the "Arab spring" out of control, failures in the Caucasus and Central Asia: a seminar in RAND 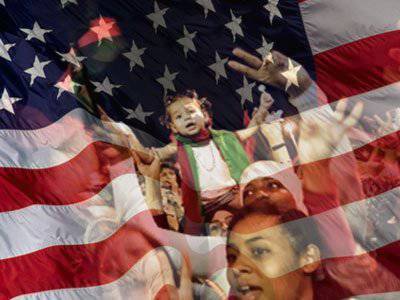 In the course of the seminar on the development of a strategic analysis methodology held in the US strategic research center RAND (Research and Development) in the summer of this year, the National Intelligence Council (NIC) of the United States Long-Range Analysis Unit A number of theses were announced, which determine the dynamics of US foreign policy in the Middle East region, the Caucasus and Central Asia.

According to analysts Sergey Grinyaev and Hrachya Arzumanyan in an article published on the website of the Armenian agency "Noyan Tapan", of interest is the conclusion that "velvet" revolutions in Georgia and Kyrgyzstan actually failed, as did the whole "Arab Spring" (1) which today threatens to break out of control. "Based on interdepartmental contradictions and internal struggles in the US intelligence community, the conclusion that the American policy failed was not officially made. The agencies did not want to report the bad news political decision makers in Washington, ”experts conclude.

"The theses about the main points of the US strategy in the Middle East are also very characteristic. First of all, it is the thesis of the desirability of maintaining authoritarian regimes in key countries of the region (in Egypt, Iran, Syria). Despite the revolutionary change of power in a number of countries in the region and the arrival of a new elite, the United States does not intend to contribute to the collapse of key countries, threatening chaos and loss of control over regional processes. In the same context, it is interesting to assume that Turkey may lose the secular character of the state. nskie experts are right, it will take quite serious changes in the regional politics of the Caucasus, where the Islamic factor will acquire a qualitatively different sound and role, "- the authors of the article.

Sergey Grinyaev and Hrachya Arzumanyan note in this regard the statement of Sheikh Yusuf El-Kardawi, one of the spiritual leaders of the Egyptian Muslim Brotherhood, which some people call the "Sunni Khomeini." “He attacked with fierce criticism of Russia's policy in the Middle East. In one of his speeches on QatarTV, the sheikh said the following:“ Brothers, Moscow these days has become an enemy of Islam and Muslims. It turned into the number one enemy of Islam and Muslims, because it came out against the Syrian people ... The Arab and Islamic world must stand on a united front against Russia. We must boycott Russia - our enemy number one, "experts cite Yusuf al-Kardawi.

"The conclusion that the shifts taking place in the region today are in favor of Iran is also interesting, regardless of how far it develops the nuclear program (1), as well as the view that sanctions and the financial crisis are not able to have a serious impact on This shift makes it possible to reiterate that the Iranian nuclear program is only a form of deterrence from the US of Iran’s growing power.The slowdown and even complete cessation of the nuclear program will not change the goals of American policy and strategy towards Iran. From this point of view, the ongoing group (5 + 1) negotiations around the Iranian nuclear program are viewed as a dead end, but a necessary element of the overall strategy, which should allow neutralizing the policies of Russia and China, on which the attempt will be made to lay the blame for the failure of the negotiations.

A similar approach is observed with respect to the Israeli-Palestinian problem, when, against the background of an understanding of the impasse in the current US policy, the task is how and how to get out of the game, and who should be blamed for the failure of former diplomacy. After the politicians conclude that there is no solution to the problem (including the format of the two states), the key question is: who will be found guilty of disrupting the negotiations and the destruction of the structures, on the basis of which attempts have been made to resolve the problem over the past decades.

From this point of view, the concept of “reputation” of the geopolitical factor and the situation where decisions are made are dictated not only by objective factors and calculations, but also by subjective ones, including reputation, the preservation of which may cause the United States to act irrationally. The United States, as an actor, cannot afford to shake its status as a superpower and the dominant power in the geopolitical arena. Therefore, they need to avoid a situation where the superpower is “cornered” and is forced to solve the problem of saving face. Such a choice and dilemma - political calculation or reputation - is fraught with irrational decisions, "the authors of the article warn.

In this regard, they continue, it can be noted that recently "reputational risks" are also facing Russia: "In particular, the statement of Nursultan Nazarbayev about the" colonial yoke of Tsarist Russia, "landing an airplane with Russian citizens on board in Turkey, put the Russian leadership before the need to find a fairly subtle compromise between the need to save face and not be drawn into destabilization and someone else's game on unfavorable conditions for themselves. "

"In general, analyzing the results of the seminar held in RAND, it can be concluded that in certain circles in the US there is an understanding of the fact - many of the regional constructions and projects around which US policy was built may collapse because they have ceased to comply with the 21st century security environment Such a conclusion looks quite logical and leads to the formulation of a new challenge: how could the US ride the inevitable wave of instability in the region, sending it to the required direction? In the US, there is an understanding of the need abandoning a number of projects instead of solving the problem of preserving the load bearing structures of the regional security of the Greater Middle East. At the first stage, it is proposed to focus on using the released decay energy, directing it in the right direction in order to ultimately be able to build a new structure region, in which the role and importance of some actors will be radically revised, which will ultimately create a new balance in the region at a lower level no tension in the region ", concluded Sergey Grinyaev and Hrachya Arzumanyan.