December 11 2012
191
Recent statements by Prime Minister Dmitry Medvedev and his closest associates are causing great bewilderment. It seems that the yard again 90-s. Again the word “privatization” becomes the main word at government meetings. Again, we hear about the need to put everything in “effective” private hands.

But if at the beginning of 90's we still didn’t understand what was behind these words, today we can say with confidence from the height of the past tense. We know whose hands it is. We know who “effectively” buys the property of the Russian state. And we don't want that. Two times not very clever people are attacking the same rake.

Or those who for some reason really want to step on them. 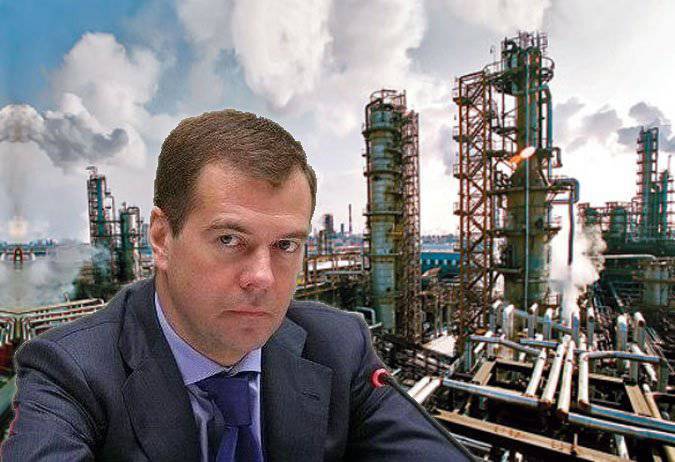 “Privatization will be the key topic on the agenda for the current Russian government, and it will develop all sectors of the economy, not just oil and gas, assured Russian First Deputy Prime Minister Igor Shuvalov.”

Why says so Shuvalov? Because exactly the same thoughts are expressed by Prime Minister Dmitry Medvedev.
Medvedev says so directly: it is precisely privatization that is needed for effective management of enterprises. I quote: “so that the economy develops in the right direction. This is the basis for creating a modern development model. This model should be based on private property. ”

And why on private property? Why can't the model of the economy develop effectively, where state property is also developing effectively?

They are exactly reminiscent of the actions of the young Soviet government, when, for strictly ideological reasons, on the basis of pure theory, everything private was to become public. This was dictated by Marxist ideology. The logic of the economy in the socialization of hairdressing, laundry and restaurants there was no.

So today, just as in the plans of the government there is no economic logic. There is a solid ideology. State property must be sold. Why? Because it's more efficient. Remember, the winged poster-anecdote of the period of developed socialism - "Lenin's teaching is correct, because it is true!". In the words of Prime Minister Medvedev, the evidence base is exactly the same.

By the way, when we are told about privatization, it is “as if” addressless. But ask yourself how many of your friends can buy a port or a “piece” of the Russian railway? The circle of those who buy for the rapidly cheapening money is hopelessly narrow. This is our foreign partners who simply draw this money from the air. But why does Russia need this?

But the continuation of quotations Shuvalov, which fully confirms our fears, in whose favor the government wants to sell off state property.

“Next year, we may come to the point of selling the shares of the best shipping company in the world, Sovcomflot, here on the stock exchange in New York,” said Shuvalov at this meeting, which was held as part of the “Day of Russia 2012” on Wall Street. According to him, railways, airports, river ports, health care, education are those "sectors that can be very profitable for investors."

So if Sovkomflot is the best shipping company in the world, it may not be necessary to sell it? Let's also pay attention to the title of the article: “Shuvalov assured foreign investors of the benefits of investing in Russia.” It happens in New York. And the impression is that the government is not going to call any other “investors.” And it really wants to transfer “railways, airports, river ports”, and at the same time “health care, education” to “effective” and at the same time strictly foreign hands.

But why does Russia need this?

What is the matter? Where did the government Dmitry Medvedev such privatizing itch. Where does such zeal to sell everything and everyone, having behind the back experience of voucher privatization and a lot of “effective” managers? after which, under Putin, the state took tightly standing enterprises back under its control.

Let's talk a little bit. Every family has a kind of stash for a rainy day. In the language of our government - “airbag”. It can be gold jewelry, maybe a ring with a precious stone, a bank account. Who allowed the income - as such a "pillow" bought an apartment. Each family has its own “gold reserve”. Methods can be different - the meaning is always the same. To have on a “rainy day” is something that just until this day does not depreciate and turn into dust and dust.

Sold "stash", pending on a rainy day, only with the onset of a rainy day. Not earlier. So do all normal and reasonable people.

So is there a need to sell state property today? Is there such an urgent need for privatization?

The country is essentially one big family. Which should also have a "airbag", no doubt. And she is. Previously, it was called the "Stabilization Fund", now the "pillow" was divided into two parts: the Reserve Fund and the National Wealth Fund.

In which case there is at least some logic in the sale of state property? In case of shortage of money in the budget of the country. Look at the budget 2013. The budget for 2013 year is not in short supply. Moreover, despite the direct disposal of President Putin, the government decided to spend one trillion rubles in this budget not to spend, but to send to the Reserve Fund. That is, further increase the "airbag". Let's remember –1 trillion rubles!

That is, there is enough money both for the budget and for the “stash”. Why in such a situation to sell state property? You will not sell your family's “stash”, your “family stabilization fund” and convert it to money if you don't need money? If you do not need money urgently and necessarily? Sell ​​gold family jewelry or an apartment to get money? Not. After all, on the “rainy day” they collected and saved, and since it did not come, there is still no need.

Now we are looking at the amount that Medvedev's residents are going to gain from the sale of state property in the same 2013 year. The numbers vary - from 260 billion rubles to 427 billion: http://news.ru.msn.com/privatization-2013- all- plan

There is a reasonable question. Why sell state property to 500 billion if you already plan a trillion to invest in a “pillow”? Simple everyday logic suggests a simple option: put in the “stash” not a trillion, but 500 billion rubles, and the rest of the 500 billion you will have in the form of a port, a railway and Rosneft shares. After all, these assets will not go anywhere. As was the port, so it is. And Rosneft, like pumping oil, will continue pumping. Why sell these valuable assets in order to get the money you don’t need.

Ask anyone - which is safer: a port and a railway or money? And by the way, and where this money will be invested. We look at what they are going to invest. We find the website of the Ministry of Finance, and on it the Reserve Fund. Here is the link: http://www.minfin.ru/ru/reservefund/

We look. We select the “Management” section and look into what eternal values ​​that are not subject to “corrosion” can be put into the funds of the “Reserve Fund”. What will be more reliable port and railway.

Where would you put your family savings? I am sure that gold will take the first places in popularity. But the Reserve Fund in gold can not be invested. According to law. They MUST be invested in:

- debt obligations of international financial organizations, including those issued with securities;

Further study the list of "eternal values" from the website of the Ministry of Finance on your own, if you have enough strength and patience. That's all and it begins to clear. The government wants to sell large objects built by the work of our people, so that the money they receive ... lend to the United States, Britain and other countries. By purchasing their debt obligations. The ones that the States have already released for $ 16 trillion.

I want to remind you that in reality the scheme of such “privatization” is nothing more than a free transfer of state assets and natural resources of Russia to the West:

After all, the money received from the sale of the port, the government of Medvedev will immediately lend to the United States, whose “investors” will buy this port.

1. The current round of privatization, the conductor of which is, Prime Minister Dmitry Medvedev personally does not make sense from an economic point of view. Today there is no such urgent need for money to sell the last shirt, like a real alcoholic in front of drinking establishments.

2. The current round of privatization is nothing more than a disguised and held to the accompaniment of beautiful phrases, a FREE transfer of state property of Russia into the hands of the West.

3. Medvedev plans to carry out such privatization solely for ideological reasons.

Dmitry Medvedev and his government somehow believe that Russia will be better off.

Do you think so too?

Personally, I am absolutely convinced that it is not necessary to dekulakize state property in favor of ideological tenets.