The genius of the Russian artillery - VS Baranovsky 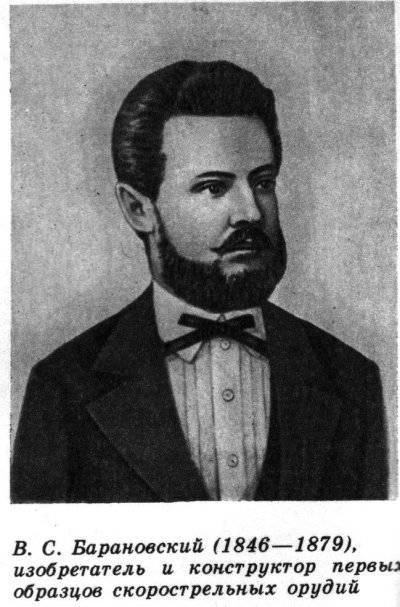 A talented Russian inventor, son of a professor at the University of Helsingfors and inventor Stepan Baranovsky. 1 was born on September 1846, 7 died in March 1879. Education itself contributed to the development of a vocation for mechanics and mathematics, studying the latter under the guidance of the best professor (his father). Already from the 11 age, he was practically acquainted with mechanics, accompanying his father on trips abroad to familiarize himself with the then state of the issue of compressed air, like a mechanical engine.

In 1861, the city of Baranovsky, in the 15 year of his life, was an active accomplice in his father's work on the device of the “wind scooter” (self-propelled trolley with pneumatic drive).

With him, in 1862, I participated in the execution of a government order for the construction of a pneumatic engine for a submarine, and here, having designed a special design of bows between the pipes of the oven, made it possible to reduce the amount ordered by Rosnelei for pounds sterling.

Without receiving any diplomas, Baranovsky nonetheless stocked up with an excellent scientific education, listening to public lectures at one of the institutes of Paris and attending the University of St. Petersburg as an auditor. From here, Baranovsky first entered the factory of A. I. Shpakovsky, then moved on to Ludwig Nobel, parting with whom, shortly before his death, set about building his own mechanical and shipbuilding factory.

Contributing to the general development of technology, Baranovsky enriched the latter with a whole range of his inventions. The most important of them are: a drainage machine for working on gold mines, a special type of fire pipe and hydraulic control unit. He himself made many useful improvements to the cause of artillery equipment; on the comparative test of mitraliase, produced in Egypt, the improved six-barreled "small-arms" of Baranovsky was recognized as the best. Original advantages stood out on the experiments invented the charging box.

But Baranovsky's most important invention in this area was his 2½-inch rapid-fire gun. In general, in 1872 — 1875, he creates a whole family of 2,5-inch artillery systems — a light cannon for horse artillery, a mountain cannon, and an amphibious assault cannon, which marked the beginning of domestic rapid-fire artillery.

The merit of V. S. Baranovsky is that he was the first to equip his guns with devices that became the indispensable accessories of any riflemen. These included a piston valve, equipped with a self-propelled axial drummer, which automatically worked when the valve closed. At the same time, a special safety device excluded the possibility of an accidental shot when the shutter was not tightly closed, but in the event of a misfire, the drummer was instantly cocked by turning the special handle. For the vertical (from —10 to + 200) and horizontal pickups, Baranovsky was the first to use high-speed helical turning and lifting mechanisms. Instead of a simple rifle scope with a front sight on the front of the barrel, he equipped his guns with an optical sight of S. K. Kaminsky, which provided a quick tip-off.

The process of loading dramatically accelerated the use of unitary cartridges, and the rollback after the shot reduced the hydraulic brake in a cylindrical case, on which a spring-loaded knurling was put on, returning the barrel to its original position. Thanks to these engineering solutions, the guns of V.S. Baranovsky developed an unprecedented rate of fire for those times: 5 rounds per minute.

V. Baranovsky's rapid-fire artillery systems, which opened a new era in stories artillery were immediately adopted by the Russian army. It is curious that when testing his 2,5-inch mountain cannon, the German “cannon king” A. Krupp hurried to offer the Russian military department his 75-mm high-speed rifle gun. But after comparative firing, the head of the Main Artillery Directorate, General A. A. Barents, reported to Minister of War D. A to Milutin that the Russian gun was superior to Krupp in all respects. 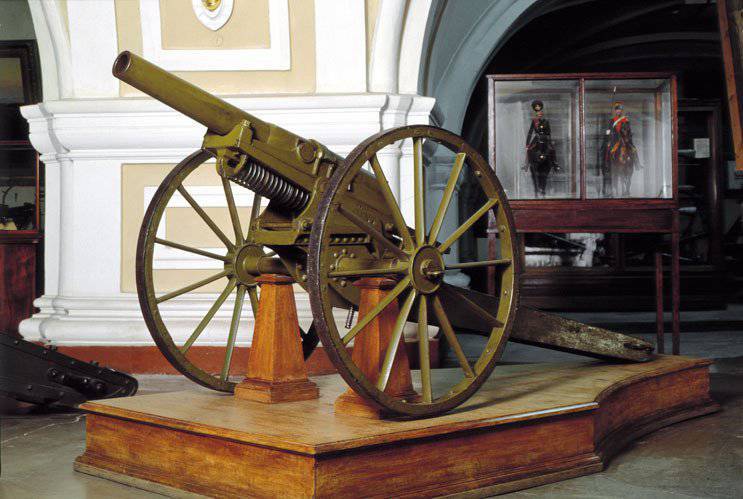 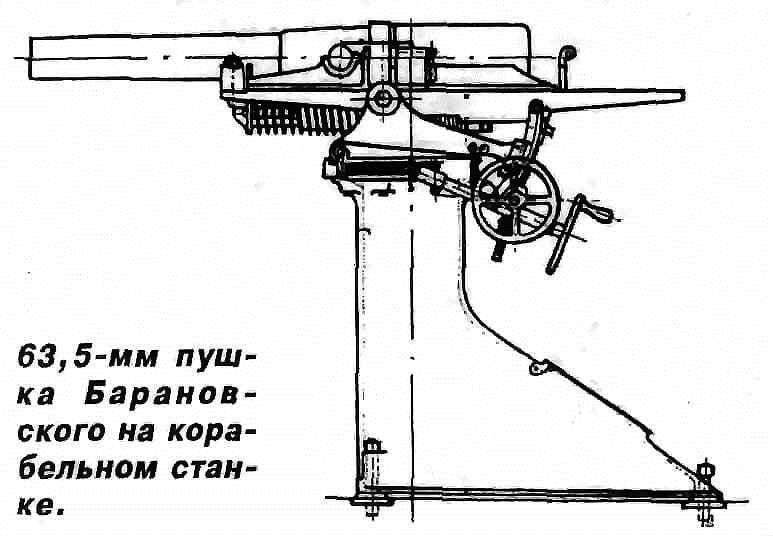 The guns of the Baranovsky system as part of the whole battery took part in the last Turkish campaign and brilliantly withstood the test defined for them.

Not limited to the development of rapid-fire cannons, V.S. Baranovsky in the 1875 created the original model of the gun-case, as those years were called multi-barrel, small-caliber systems, the predecessors of machine guns. For mass production of unitary cartridges, he creates a machine, the design of which has not changed for almost a century. Much more could have been done for the Russian artillery by a talented engineer, but 7 March 1879, he tragically died during the trials of unitary cartridges. The premature explosion of the projectile, while loading the gun by Baranovsky himself, mortally wounded him, and an hour later, in terrible agony, he died.
The case of the inventor was continued by his cousin P.V. Baranovsky, who had previously created gun carriages for speed fighters Vladimir Baranovsky.