December 4 2012
37
On Friday last week, members of the Egyptian Constitutional Commission approved the draft constitution of their own country.

The basis of the document was taken constitution 1971, which has undergone some changes. Opposition parties did not participate in the consideration of the project, which lasted more than sixteen hours. Their members are sure: the document undermines the foundations of the state. 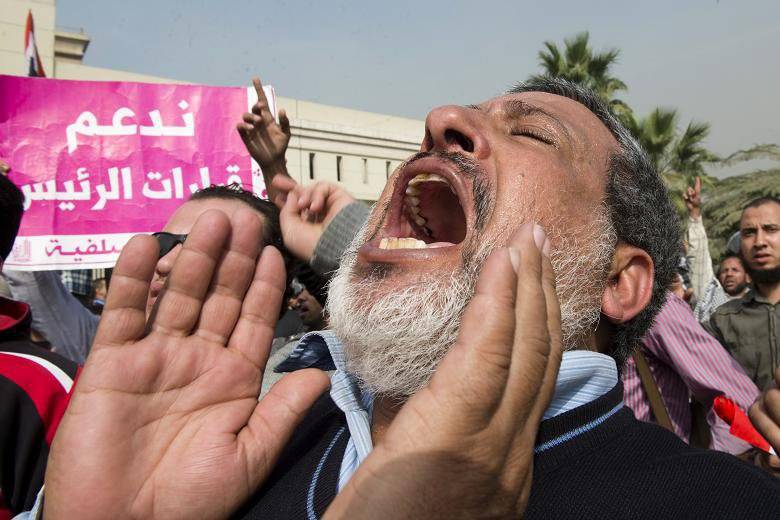 In the draft Egyptian Basic Law, the former deputies of the National Democratic Party, who were in it in the days of the “Egyptian revolution 25 of January”, are forbidden to hold any political office for ten years.

“This constitution represents the diversity of the Egyptian people. All citizens of the country, both men and women, will find themselves in this law. According to this Constitution, we will abide by the laws of God, which were previously only written on paper, and respect the freedoms of citizens. ”

“Diversity” actually comes down to absolute monotony. The draft approved by Mursi states that Islam is the state religion of Egypt, and the principles of sharia are the main source of legislation. The right to interpret “issues related to Sharia” is enshrined in the project for the mosque and Al-Azhar University (the center of Islamic jurisprudence in Cairo). Experts regarded the draft Egyptian Basic Law as the basis for the creation of an Islamic state on the model of Saudi Arabia, and the head of the Egyptian branch of the human rights organization Human Rights Watch, Heb Moraief, noted that the new bill could curtail freedom of speech. The document contains two articles about insulting the Islamic prophet, which can cause a wave of criminal prosecution of, say, atheists or non-believers who have decided to express their opinions.

Opponents of Mursi formed the "Front to Rescue the Motherland", which was headed by former presidential candidates Amr Musa and Hamdin Sabbahi. The leadership also includes the former director of the IAEA and the leader of the Constitution Party, Mohammed al-Baradei, and the former leader of the Brothers to Save the Homeland party, Abdel al-Futuh, who earlier supported the candidacy of Mohammed Mursi in the elections. Comrade Sabbahi has already said that "the people will not accept the hastily concocted Basic Law of the country."

“We categorically reject the president’s constitutional declaration and the draft constitution,” noticed he. “Unfortunately, we see, and this was confirmed by the last interview of Mohammed Mursi to Egyptian television, that he does not want to hear us and is ready to listen only to his supporters.”

“Now the Egyptian society is divided into two camps: the Islamists and their supporters and those who are against them. Now the Islamists have already reached a dead end, and this explains their unreasonable act with haste in the development of a new draft constitution. With the adoption of the new constitution, Mohammed Mursi automatically cancels the constitutional declaration that caused the protests and seems to be bringing the Muslim Brotherhood out of the impasse. However, now a wave of mass protests broke out all over the country against the new constitution and, apparently, it is unlikely that it will be held in a referendum. Interestingly, even the judges, who should control the referendum process, are not going to participate in it ”.

The people wanted freedom and democracy, the analyst believes, so he went to rebel in Tahrir,

"And now we are made slaves."

Mursi himself считаетthat the constitution will open a new page in stories countries and the establishment of a solid democracy in Egypt.

On Tuesday, the opposition, including members of the Supreme Constitutional Court of Egypt, plan go to the presidential palace with a protest. Many in Egypt believe that since the January revolution of 2011, almost two years in the country have not had such political upheavals as today. Now in Egypt there is a general indefinite strike of judges, which began last week in protest against the “attack” of Mursi on the judicial system.

“We live in a country without courts, and the president has all the powers in his hands. This is a complete dictate. ”

The Club of Judges is the union in which the 9500 members are members, declared that the judges would not, as usual, observe the referendum and generally engage in supervisory activities. The judges say that they will continue to strike until Mursi cancels his decrees - the ones about which he said that they are temporary and necessary to protect the country's transition to democratic rule. Now they were joined by judges of higher instance.

"The judges of the Supreme Constitutional Court have no choice but to declare to the glorious people of Egypt that they cannot fulfill their sacred mission in such a tense atmosphere," said a statement voiced by the state news agency MENA.

But supporters of Mohammed Mursi, a native of the Muslim Brotherhood, accuse judges of loyalty to Mubarak - the one who appointed them, and then accuse them of trying to thwart Egypt’s transition to true democracy.

Liberal activist and former MP Amr Hamzawi warned that in the future it could be even worse than now:

“The president and his supporters (the Muslim Brotherhood) lead Egypt in the darkest period of its history,” he said. “He (Mursi) dictatorily decided to hold a referendum, where the issue is the illegal constitution, which splits the society and blocks the judicial system ...”

The opposition promises that on Tuesday at least 200.000 protesters will come out in Cairo to Tahrir Square.

Egyptian Islamists began their rallies in support of President Mohammed Mursi on Saturday.

“People support the decision of the president!” - chanted crowd at a rally at the University of Cairo, organized by the Muslim Brotherhood.

Tens of thousands of people gathered there. Many were holding banners with slogans: “Yes” - stability ”and“ Yes ”- Islamic law”.

Muslim radicals in Egypt approve and support the decisions of Mursi.

For example, Salafi Yasir al-Borhemi, a member of the Constituent Assembly, declaresthat the president’s decision to pass the draft Egyptian constitution for a national referendum is “the right step to achieve stability in Egypt.” Jalal Mora, the secretary general of the Salafi Nur party, explained that the Egyptians, tired after almost two years of waiting and weary of political instability, were delighted by the president’s “long-awaited” decision to put the draft constitution on a popular vote. Mora calls on the Egyptian people to work together to achieve revolutionary goals, which include social justice, freedom, and the creation of fully functioning state institutions.

Mohamed Ibrahim, a simple accountant, shows to the crowds of protesters in Giza and tells the reporter:

“These are the people of Egypt. Is not the people a source of power? I thought the Supreme Constitutional Court receives legitimacy from the people. "

“People want the sharia of God” and “Egypt will be Islamic against the will of the secularists and liberals,” they chant.

Here is Mahmoud Said. He says:

“I am against secular society because it is morally decayed. Egyptian people against corruption and corrupt people. "

“Who are these people who dare to talk about the president who is upholding the interests of his people?” Asked Ahmed Abdel Alim, a farmer who came from Upper Egypt to join the rally of solidarity with President Mursi.

Hassan Shaty, the head of the tax authority, shares the opinion of many at the rally that the judicial system was prejudiced against Mursi:

“Mursi defended Egypt from becoming a state without institutions. How can we blame the president-elect who we are trying to defend the country? ”

Mohammed Salem, a plumber who also took part in the rally, says:

“We chose him, and we are with him, as long as he cleans everything corrupt and leads us to stability.”

Demonstrators see the seizure of power by the president as a viable transitional solution, the ultimate goal of having stability. Although they recognize that the constitutional declaration gives Mursi absolute power, his supporters say that they adopt this temporary measure, which will continue until the constitution adopted in a referendum cancels the declaration.

With a firm belief in the intentions and decisions of the president, the crowd chants:

"You are not alone, Mursi, we are with you."

Hassan Ammar Tabet, owner of a chain of stores in Maadi, says:

“Sharia is a way of life that fits our culture. Egyptian customs and traditions are built on sharia. Egyptian society does not accept Western liberalism. ”

Some Egyptians say they support the president not for “who he is,” but because he stands for Islamic law.

But Imam Faisal Abdul Rauf believesthat Mursi, having come to power as a representative of the Muslim Brotherhood, now decided to put himself above the law - which violated one of the basic principles of Sharia and endangered Egyptian democracy.

The Egyptian President promised, Rauf writes, that he would create a government based on Islamic law, but, ironically, by giving himself broad powers, including immunity to his own decisions, he violated one of the central principles of Sharia: no one is above the law.

Therefore, one should not be surprised that protesters, including even some members of the Brothers, who also condemn the seizure of power, took to the streets of Cairo.

“If Mursi is ready to break God's law, then isn't he just another dictator of the pattern Hosni Mubarak?”

Throughout the Muslim world, the imam continues, people look at Egypt. The ability of a democratically elected government of one of the most important Muslim countries to create a modern society based on Sharia would be a fairly powerful political application.

“Over the past six years, I have collaborated with some leading Muslim scholars, creating an Sharia index to determine how a true Islamic state should look like, built on traditions. Most of our scholars have concluded that representative democracy, which can express the collective will of the people, is the best modern way to determine the will of God. ”

The Imam emphasizes that this is a type of “healthy democracy” with a system of checks and balances that is “known to the Americans.” Especially important, in his opinion, is the independence of the judiciary.

That is why the decree of Mursi, banning the courts to consider his decision, according to the traditional concept of Sharia, is bad.

"Since the times of the Prophet Mohammed, the court has always had an independent role in verifying the authority of the executive branch."

The author cites an example: in the era of the Ottoman Empire, under Sultan Sheikh-ul-Islam, who united the judicial and religious branches into a single whole, the judicial-religious authority had the right to even cancel the decision of the executive branch.

The law of God, the imam believes, in an Islamic state is ideally represented by an independent judicial system, which acts to ensure justice and serves as an auditing authority in the legislative process.

Thus, in Egyptian society there is a split and polarization. One party, now in the camp of the opposition, advocates the ideals of the January 2011 revolution, the other rejects Western liberalism and stands for a constitution built on the principles of Sharia. For the triumph of Islamic law, supporters of M. Mursi are willing to accept the temporary dictatorship. As for the particular point of view, it is represented by Imam Faisal Abdul Rauf, who believes that Sharia has much in common with the principles of American democracy.