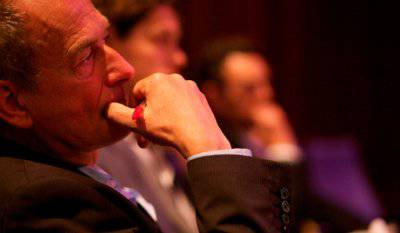 In the modern world there are several structures whose activities, as a rule, are not advertised, but attract special attention due to the significant and sometimes exclusive role of their members in world politics. Among such institutions are, in particular, the Club of Rome, the Trilateral Commission, the Council on International Affairs, the Group, or We (founded by the famous apologist for world domination of Britain, the creator of the diamond empire of De Beers, Cecil Rhodes). And, of course, the Bilderberg club, created in May 1954 by the initiative of the Rockefellers.

Increased attention to bilderbergerm associated with three circumstances. The first is the personal composition of the conferences, the main participants of which, without exaggeration, are the people who determine the political and economic development of the leading countries of the world, and of the world in general. These are representatives of the richest and most influential families of the West - bankers, industrialists, media moguls.

Invited to certain events of the Club are the characters, who subsequently become not just the first persons of the states, but active agents of the interests of those who brought them to power. Thus, in 1991, Arkansas Governor B. Clinton successfully withstood the Bilderberger bride and received their support during the presidential campaign. Tony Blair underwent a similar procedure in 1997 and Romano Prodi in 1999 before becoming head of the European Commission. And in 2008, the secret meeting between B. Obama and H. Clinton (1) took place in the house of Diana Feinstein, a member of the Bilderberg club, at which it was decided who would become the 44 president of the United States.

The second circumstance is the design of the course of the world storieswhich are engaged in conference participants. The fact is that members of the Bilderberg club are gathering in order to agree on issues of vital importance for them to determine the vectors of world development in their own interests. We have no right to deny the presence of interests among influential persons, but for some reason their interests always contradict the ideas of equality, freedom, justice, and finally, accepted by different nations of the world. Not to mention the fact that their interests are directly connected with the destruction of sovereign states (there is no reason to believe that Russia is excluded from the outlined states in this series).

And it just so happens that after each meeting of bilderbergers in different parts of the world serious changes take place: somewhere a new conflict breaks out, pirates seize ships, terrorists blow up civilians, and somewhere an economic crisis begins - quotations jump on the markets, currency rates fall , governments defaults.

The third circumstance is the emphasized secret nature of the meetings, the absence of any reliable information from the members of the Club themselves. The unprecedented security measures, and above all the overlapping channels of getting information about the debate in the media in the Club, only show that the Club members have something to hide.

Anyway, “this small, flexible, informal and confidential international forum” does not hold votes and does not accept program statements (2) followed by their announcement at press conferences, but it is going to discuss extremely important world problems. On the website of the Bilderberg club, covered in the same darkness as the conferences themselves, you can find a list of these issues. It is indicative. For example, the conference held in Chantilly (Virginia, USA) from May 31 to June 3, June 2012, discussed the state of transatlantic relations, the possibility of achieving strong economic growth, the future of democracy in the developed world, and possible changes in the political landscape of the United States and Europe. At the same time, the problems of US foreign policy were linked to instability in the Middle East. Particular attention was paid to the fate of the euro. The agenda also included such questions that were formulated very frankly:

• What can the West do with Iran?

• How do sovereign states cooperate in cyberspace?

• What is China’s economic and political outlook? (3)

The interests of the Bilderberg club are truly global. Club conferences are held once a year, usually in May-June. These are quite large-scale events: the number of participants can pass for 300 people (while the number of permanent members of the club usually does not exceed 120 people). 2 / 3 participants are from Europe, and the rest are from North America. A similar distribution of membership between capital and politics: 2 / 3 - big business, 1 / 3 - politics. (4) These meetings are scheduled in advance. Journalists are more or less aware of them. However, there are emergency meetings, the limited number of participants which indicates the seriousness of the problems. Among such particularly important meetings of the Club is the recently held November meeting in Rome. According to indirect data, the aggravation of the crisis was discussed in the countries of southern Europe, and above all in Italy.

The meeting of the “small council” was held at the hotel “De Russie”, which is considered unique in the “luxury” class and belongs to the well-known hotel chain Rocco Forte Hotels. “His pride is the magnificent terraced gardens, which are a quiet oasis in the center of the bustling Eternal City, where you can refresh yourself in the fresh air or take a pleasant walk. In the hotel’s mysterious garden, you can watch the elegant fluttering of rare species of butterflies. The hotel, whose name is associated with frequent visits by members of the Russian Imperial House, was built in 1816 and combines sophisticated elegance and an atmosphere of harmony and comfort ”(5).

Located in the very center of Rome, on the prestigious Via del Babuino, which connects Piazza di Spagna with Piazza del Popolo, this luxury hotel not only emphasized the level of those gathered, but also had to divert the attention of annoying journalists. The fact is that the Bilderberg meeting was timed to coincide with the Rome Film Festival (November 9-17), which is always attended by many eminent and rich people who prefer the De Russie Hotel. As they say, if you want to hide something - put it in the most prominent place.

However, despite such precautions, Italian journalists managed to find out that at least 80 members were invited to the Rome Club meeting, mostly those who are on the organizing committee. The main issue on the agenda was the far from bright future of Italy, Spain and Greece, “for which the global crisis of derivatives hit hard and the austerity measures subsequently imposed” (6).

According to the site DagoSpia.com (7), almost the entire cabinet of Italy was present at the meeting. In particular, the Chairman of the Council of Ministers and life senator Mario Monti, former Prime Minister Giuliano Amato, ministers of economic development, infrastructure and transport of education, justice, labor. In addition, a number of influential people from the media world, trade unions, industrial holdings were invited. For example, the head of Telecom Italia, Franco Bernabe, the chief editor of the Corriere Affairs Serra Ferruccio de Bortoli, the general director of Parmalat Enrico Bondi. Italian bankers were represented by the chairman of the Central Bank, Ignazio Visco, and the supranational banking sector was also Italian, by the chairman of the European Central Bank, Mario Draghi.

Such a representativeness of the Italian delegation testifies to the extremely serious situation in which this large European economy has fallen. According to most economists, if the default of Greece and even Spain “united Europe” can survive, then the collapse of Italy will mean the end of the European Union. According to the forecast of the European Commission, in 2013, the eurozone will again face a recession, which will overwhelm Greece, Spain, Italy, Cyprus, Portugal and Slovenia. Chief European financier Olli Rehn believes that "difficult times ahead." The level of public debt in the euro area will increase from 88,8 to 94,3% of GDP in 2014. Greece will be the champion (176,7% of GDP in 2012 and 188% of GDP in 2013-2014). In second place is Italy (126,5% of GDP in 2012). This year, the national debt will exceed the size of GDP in Portugal and Ireland, Belgium will stop at the border in 99,9% of GDP, but next year it will cross the 100% (8) mark.

Experts from the Nouriel Roubini Foundation, a Nobel laureate in economics who predicted the 2008 crisis of the year, believe that the eurozone will begin to disintegrate next year ... (9) The chances of Greece and Portugal to remain in the eurozone dropped to an estimated 10% (previous estimate is 15% ). These two states will be able to stay in the eurozone only if the decision makers of the Old World agree to the creation of a supranational budgetary body that provides assistance to "problem" countries.

The “baseline” scenario of developments in Europe, which experts estimated the likelihood of realization in 60%, assumes that Greece will leave the eurozone at the end of 2013, and Portugal - until the end of 2014. At the same time, the ESM anti-crisis fund will be fully spent at the end of 2014. Analysts estimate the probability of an uncontrolled collapse of the Eurozone in 10%. This scenario assumes that Greece will default and leave the eurozone. Behind this begins a cascade of defaults. As a result, Portugal, Ireland, Spain, Italy and even, possibly, France will leave the euro zone.

As you can see, there is something to discuss in the Mysterious Garden, considering rare butterflies. And although most of the publications that published their divinations about the content of the meeting of the elected members of the Bilderberg Club in November of this year, it is believed that the topic of discussion was the appointment of a new Commissioner for Spain, Greece, Italy and other EU countries in crisis (10), no appointment can not change the situation. Here we need completely different approaches.

And something tells me that these "other" approaches have already been found. As one of the founders of the Club, Denis Healy, noted, “Bilderberg meetings are the most productive of all international meetings I have ever attended. Confidentiality gives people the opportunity to say what they think and not worry about the consequences. ”(11)

The consequences of the "Roman holidays" Bilderberg should appear in the coming months.