Rogozin intends to launch the flywheel of the Russian industry 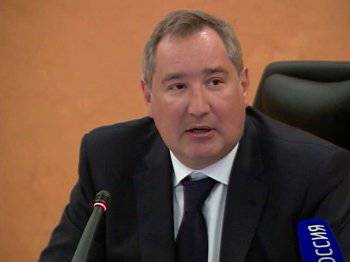 Deputy Prime Minister Dmitry Rogozin told the media about the priorities of the fight against corruption in the defense and rocket and space industries, as well as the goals he intends to achieve while working at his post. He did this in the program "Posner" on Channel One.

The government has seriously decided to take on corrupt officials, the deputy head of the cabinet said. As the official said, inviting him to the post of deputy prime minister, Dmitry Medvedev spoke with him about the fight against corruption and gave him all the necessary instructions and powers in this regard.
“When I came to Medvedev Dmitry Anatolyevich at the end of December last year (he invited me to his office, Gorki, and made an offer to join the government), then we spoke with him about the fight against corruption,” Rogozin said.

He added that he could not disclose all the details of the conversation without the consent of the prime minister, but he was given all the necessary instructions and powers in this regard. The same was confirmed later by Vladimir Putin. “Therefore, if we were joking with corruption, I would not work at this work,” Rogozin stressed.

"Restoring order in this area, we should not just grab someone by the tail and drag them to the fresh air, showing it to everyone, the main thing is to create rules under which this kind of embezzlement, bribery, and cronyism will be kept to a minimum. Of course, there is no such thing, "the ITAR-TASS deputy head of government quotes.

They also talked about the future plans of Rogozin at his post. The Deputy Prime Minister said that he does not have the desire to fight for the presidency in the future. “I don’t have any presidential ambitions at all,” the official said. “But I have ambitions in the reality that I’m doing now. That is, I want to work for a few years in the position I’m holding and entrusted to me so that through the 3-4 of the year we have earned the flywheel of the Russian industry. "

According to Rogozin, the fact that he travels around the country, writes program articles and fights against corruption in no way speaks of his desire to run for president.

“It gives me great creative, professional pleasure to work in the team of President Putin. It’s very comfortable for me to work in the team of Prime Minister Dmitry Anatolyevich Medvedev,” Rogozin concluded. “They trust me there, I have certain hopes. I want to justify these hopes. I am not at all interested in games about presidential ambitions. "

He added that if such an interest were present, he would not work in the government. “I would honestly say that I have other ideas and thoughts. I would go to form a political party. Especially since it’s not so difficult now,” the Deputy Prime Minister explained. “But I don’t want to think about it now. Because I’m informative Deputy Prime Minister. I do my job and I think that I have certain beginnings of results. "