November 23, 2012
7
Hostage-taking is the most common reception of any terrorists. Often gangsters capture and airliners. In the limited space of the aircraft it is easy for them to control the situation and the prisoners. The special services, who are trying to free the hostages, have to act in very difficult conditions. Therefore, very often such operations end in tears both for prisoners and for fighters of special units. An example of this is the notorious operation to free the hostages of the Egyptian Boeing 737 in Malta. 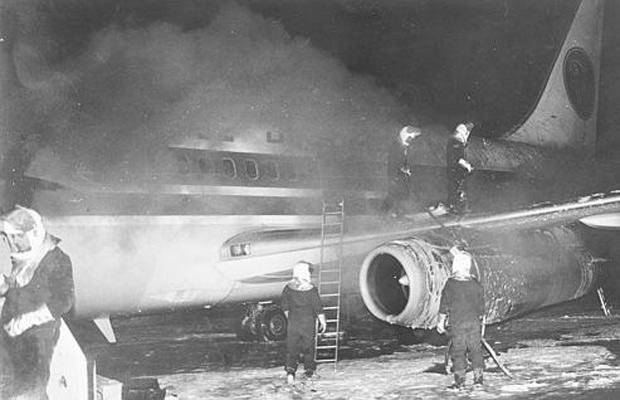 In the evening of November 23, the 1985 of the 648 flight from Athens airport to the capital of Egypt went to the EgyptAir airliner. On board were ten crew members and ninety-eight passengers. Some time after takeoff, five young guys got up from their seats, announcing that the plane had been hijacked. They had pistols and grenades in their hands, which they somehow managed to carry through the airport security monitoring station. After that, they headed for the cockpit. Using the onboard special equipment, the terrorists broke down the door to the cabin. Finding inventory was not difficult, while at the Boeing and Airbuses crowbar and hatchets were placed in the most conspicuous places and provided with pointers for proper use. Bursting to the pilots, the bandits ordered to go to Malta.

The airline EgyptAir was founded on 7 May 1932 of the year. It is fully owned by the government of Egypt and is the second largest airline in Africa. Since 11 July 2008, EgyptAir is part of the Star Alliance Alliance, becoming the first of the Middle East countries. Hosni Mubarak, who was a military pilot in his youth, patronized the airline in every way, taking it out of crisis in due time. Since June 2008, the EgyptAir emblem has become the golden image of the sky god Horus, painted as a man with a falcon head. The average age of the airline's aircraft is five years.

Then the air pirates began to transplant hostages. In the front of the plane near the door pushed the citizens of the United States, Israel and Canada. Thus, they all became a “human shield” from attempts to liberate them. In the middle of the cabin were citizens of Greece and the Philippines, who apparently did not cause any feelings to the bandits. In the rear, safe from the point of view of the militants of the "Boeing", placed the Arabs and children.

The first bloodshed occurred during the transplant. This aircraft, like all the rest of EgyptAir airlines used on foreign flights, was accompanied by armed guards disguised as ordinary passengers. On that day, there were four of them on board. Following the instructions, they did nothing until the situation was completely clarified. Later, their actions were justified, because when the number and armament of the bandits became known, the chances of success in the event of an attempt to neutralize them were very small. Nevertheless, one of the security staff, taking advantage of the confusion as a result of moving people, took out a pistol and fired at the nearest hijacker. But the bandits were on the alert, the agent literally covered a squall of bullets. Some of them have asked for a body liner. In an effort to reduce the difference in pressure and saving people from decompression in the cabin and the destruction of the vessel's plating, the pilot sent the plane sharply down, lining it only at a height of two thousand meters. During independent actions, the guard received heavy bullet wounds, while the terrorist got off with only a scratch.

In 20: 05 Boeing asked the dispatchers of the Luka airfield, that La Valetta is, permission to sit down. The Maltese refused them, putting out the landing lights. However, under the threat of terrorists the crew of the hijacked vessel still had to land the plane. In absolute darkness, they landed successfully, rushing a couple of centimeters from the Singapore-based Boeing -747.

And almost after the landing, the bandits began to shoot the hostages. The first was killed by a twenty-four-year-old Israeli woman. Putting the girl on his knees in the door of the plane, the gangsters shot her with a shot in the head. They shot the next Israeli in the mouth. Tourists from America were thrown out of the plane, having previously tied up their hands. A falling man was shot from several trunks. Then they killed two Jewish women from the United States. Their bodies were also thrown onto the airfield. After each murder, the terrorists laughed and sang songs.

The Maltese authorities, until the last moment, did not want to interfere in what was happening, but they could not get rid of uninvited guests. They gave permission for the landing of two military transport aircraft such as Hercules C-130, which brought the Egyptian anti-terrorist group Saka, which in our opinion means "Lightning", in the amount of twenty-five people.

Having landed, the specialists immediately began to prepare for an assault operation. In parallel with this, the administration of Malta and the representatives from Egypt that began to appear began negotiations. But the terrorists did not ask for anything. They refused money, the release of comrades, and the fulfillment of political demands. Later it became known that the seizure was carried out with one sole purpose - to kill all the hostages. The gangsters hoped to disgrace in the eyes of all mankind Hosni Mubarak, who, being the president of Egypt, was obliged to take full responsibility for what happened. "This is a complete" scumbag "! - said one of the negotiators about the results of the dialogue.

At this time, the fighters from the special forces, using special equipment, watched the captured "Boeing". The development of the situation left no options other than an assault. The group took a position under the belly of the aircraft in anticipation of the signal. But then the unexpected happened. The only lantern that burned above the entrance to the terminal went out. Who decided to turn it off, to find out and failed. The Maltese explained that they did it by order of the Egyptians. Egyptians blamed the airport employees. However, the bandits perceived the darkness as the beginning of the assault and managed to prepare for a reflection. The special forces of the Egyptians lost their only advantage - the element of surprise.

The first group of "Lightning" broke into the plane through the hatch for luggage in the cabin floor. At the same time, the second group undermined the emergency exit doors located above the wing. In the ensuing short battle, the terrorists managed to hurl three grenades. The crew also participated in the battle with air pirates. After the appearance of the special forces, one of the bandits jumped into the cockpit to shoot the pilots. But the captain of the ship Galal, having seized an emergency ax, killed the militant in a fight. Then both pilots smashed the window and jumped out. The shootout with the units of the “Lightning” ended in the death of three terrorists, and their leader, twenty-year-old Omar Morzuki, was wounded and captured.

Already at the very beginning of the assault, a fire began in the tail of the aircraft, quickly spreading through the entire avilayner. When the terrorists were eliminated, a fight with fire began. The commandos, the crew members and the passengers jumped out of the burning Boeing to the ground of the airfield. Fifty-nine people died as a result of the chaos and the absence of any rescue actions as a result of smoke poisoning. Thirty-seven passengers and crew members escaped from the fire, including an Egyptian guard seriously wounded. Many special forces were seriously burned and wounded during the battle.

Despite the fact that none of the terrorist groups has claimed responsibility, this act is attributed to the organization of Abu Nidal, one of the most dangerous terrorist leaders. This scumbag opposed any peaceful settlement of the Arab-Israeli conflict. His goal was to arrange a general Arab revolution for the liberation of occupied Palestine. The cells of his organization were scattered throughout the Middle East. Terrorist actions were committed by separate groups. Moreover, members of one cell did not know anything about the composition, activities, locations of others. Abu Nidal was found guilty of more than 120 terrorist attacks in twenty countries around the world. His favorite actions were attacks on airports, crowded places, abductions, contract killings, captures of ships and airplanes. In the course of these attacks, more than a thousand people died. The organization received tens of millions of dollars from its own business enterprises and racketeering. Iraq, Syria, Libya, Jordan provided logistical support, training and shelter to terrorists. 19 August 2002, the year of Abu Nidal found dead in Baghdad. According to the official version, he committed suicide.

Many useful lessons can be learned from this operation. For nothing teaches as well as the mistakes of the past. Judging by the results, the Lightning commanders underestimated the enemy. The youth of the bandits and their intoxication with the killings of unarmed people should have been alerted. It is clear that this is the handiwork of far from nervous and inexperienced adolescents. This is confirmed by an instantaneous reaction to an attempt to resist a security officer. Young guys, who decided to seize the aircraft, were terrible opponents, who gladly went to the world themselves and took as many hostages with them as possible.

It should also be taken into account that the plane was damaged during the shooting during the flight. Shots could touch the fuel system or electrical wiring. Overloads during the sharp decline only aggravated the condition of the vessel. Of course, the fuel line could be destroyed in the shootout during the attack. But it was just necessary to take into account such a probability in order to clearly understand what means can be used during the assault, and which not. Indeed, during the fight, the fighters actively used light and sound grenades. It is possible that they caused a fire on board the aircraft, igniting fuel vapors.

The only flashlight that was extinguished at the crucial moment says that no one conducted a briefing with the airport staff. Or he was superficial. Obviously, the actions of the staff no one took into account. They were not told what to do and what not under any circumstances. Maybe even one of the employees decided in this way to help the fighters. Later it was the lack of a clear instruction that led to mutual recriminations that did not allow to identify the true culprit.

At the beginning of the assault, nothing was used to distract the terrorists. Probably hoping for all the same sound and sound grenades. In Mogadishu, in 1977, GSG9 suddenly lit a bright fire near the plane. And the storming of the train in Holland was accompanied by the breaking of the sound barrier by two “mirages” over the car.

The fire on board the aircraft was a logical continuation of the shooting and use of mine-explosives. Therefore, one of the elements of actions to rescue hostages should have been a plan for their evacuation as a result of a fire, agreed with the airport employees. The evacuation of passengers should have been carried out by special forces soldiers. But the plan was absent, and no one worked on the passengers running in panic. This was the main cause of death for so many people.

Mr. Chance always intervenes in the course of events when people make mistakes and in assessing the situation, and in planning actions. Sometimes the cost of these errors is prohibitive. Unfortunately, Beslan is a clear confirmation of this ...