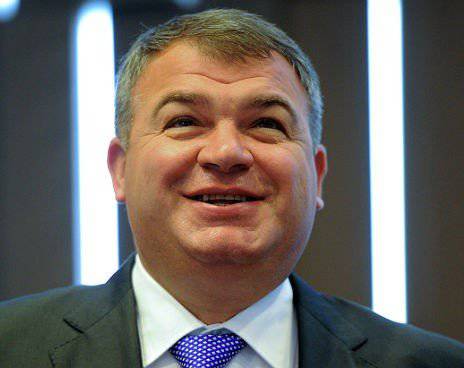 Such reflections are suggested by the investigation of a corruption case in the Ministry of Defense.

“The investigation drew a chain for itself and is now trying to convince everyone of this. And where is Vasilyev, where is Serdyukov, why aren't they being interrogated? Why is my daughter alone otduvaetsya for the whole "Oboronservis"? ", - Olga Pozharskaya, the mother of the defendant in this loud case of Ekaterina Smetanova, asked in an interview with Izvestia yesterday. The questions are quite reasonable, and the answers to them, alas, are very predictable.

The investigation has been going on for quite a long time, but there is still no evidence for Serdyukov. They are not even to his closest comrade Vasilyeva, who is suspiciously long in the clinic “after a small operation”. The latter means that the investigators are still unable to approach the former minister. Yesterday’s public friction between the TFR and the Ministry of Internal Affairs may have arisen on this basis, the source of Vedomosti, who is close to the investigation, said. And the statement of the “talking head” of the Investigative Committee, Vladimir Markin, that the ex-minister of defense could soon be interrogated, was considered premature in the presidential administration, the newspaper writes, referring to its information from near-Kremlin circles.

Moreover, according to the media, the investigation team was explicitly forbidden to take Serdyukov into the development, although she has evidence of the involvement of the former minister in this criminal case. “When the guys who took Vasilyev were asked by the authorities:“ Well, what about Serdyukov? Let's work with him, ”it was clearly said:“ That's it, stop. Nothing else will be. They also told you that this is not a 1937 year, ”Gazeta.ru quotes an anonymous interlocutor with regard to the investigation.

Recall that about the 37 year spoke at the end of last week, none other than President Vladimir Putin, when he commented on the failed appointment of Serdyukov in "Russian Technologies". It turns out that the leaders of the investigation took his words as a recommendation to restrain the ardor? If so, it’s time to ask: what was it then? Is there really a large-scale fight against corruption, or is something else happening, hidden from the eyes of the general public?

Observers admit that this is a diversified response of the authorities to new challenges. According to the Levada Center, 80% of Russians call corruption one of the main Russian problems, and the Public Opinion Foundation cites data from the March poll, in which 44% of respondents in Moscow believe that the level of corruption rises, and even 43% did not notice positive changes .

In the analytical report “The Protest Movement in Russia at the End of 2011 — 2012: The Sources, Dynamics, and Results,” prepared by Levada Center employee Denis Volkov, corruption, along with the arbitrariness of the executive and the judiciary, is one of the reasons for the politicization of civic activists. It is precisely with the inclusion in the political processes of people who have not previously been interested in politics that many street protests have linked the past year.

Volkov explained that sociologists began to connect the negative sides of the authorities with the presidency, although this had not happened before. “Just a couple of months ago, about half of Russians began to attribute responsibility for the negative sides of the government to Putin. We then assumed that we should wait for loud steps. And a week later, the president reprimanded the ministers, ”the expert reminds. “Maybe in this context, recent actions should be taken to shift responsibility for corruption: it is immediately clear who is really guilty,” says Volkov about the latest corruption disclosures.

Consequently, all recent corruption cases have served as lightning rods designed to divert the electrical discharges of discontent swirling in society. The largest of them, the size of the Ostankino tower, is undoubtedly a scandal around the Ministry of Defense and its Oboronservis, which is formally independent, but who will believe in it.

The identity of the unpopular minister gave the case a special charm. More than half of Russians (56%) reacted positively to Putin’s decision to remove Serdyukov from the post of defense minister because they believe that he was “involved in theft and corruption,” as evidenced by the FOM poll conducted by November 11.

But this is only one side of the story. Another is that the boyars have ceased to reckon with the king. No, outwardly, everything is still - honors and servility remained in place. But if before the hands in the budget were run on the elbows, now - on the shoulders. In this regard, Putin is looking for new ways to be dangerous for the elite, says Gleb Pavlovsky, director of the Effective Policy Foundation. “Putin, if he is not dangerous for the establishment, then it’s not interesting as an advocate for them either. Putin’s previous approach to managing elites, the so-called “stability” or “managed democracy” policy, suggested Putin’s strong resource popularity with the electorate, so he could act as an arbiter in elite conflicts. But by the third term, his popularity has decreased, and he is looking for new management officials, ”explains the political strategist, experienced in Kremlin affairs.

So Putin saves the rating. However, the bar who can be touched is still not raised high enough. “It is clear that there is a struggle at the top, but it was always going on, but now for the first time, the movement of borders has become noticeable, the influence is changing, the first losers have appeared. We see a fixed level of attacks, that is, officials no higher than the deputy minister are under investigation, ”says Pavlovsky.

“For many years, the reputational damage inflicted by the elite on the level of corruption in the country has not been transformed into a direct threat to the authorities and the president personally. Now the situation has changed, so the attitude towards the problem and the leadership of the country has changed. I think the new anti-corruption course of power dictated by Putin is systemic. We see this through hard and fast decision-making and a circle of people who have come to the attention of the bodies of inquiry. I think the campaign will continue ... Let us recall the recent POF poll, from the published data it follows that the majority of Russians took the new anti-corruption policy by the authorities as systemic, ”said Dmitry Orlov, General Director of the Agency for Political and Economic Communications, to Gazeta.ru.

However, it is not difficult to predict the sour reaction that will inevitably appear in the society if Serdyukov is not even interrogated in the Oboronservis case. Without this, the entire PR of the authorities will go down the drain, come out in a minus and it will become clear that it was better not to touch anything than to touch that way. Opinions of political scientists on this subject are divided. Some believe that the authorities have taken seriously the fight against corruption, while others believe that everyone will let go of the brakes as soon as the elite is sufficiently frightened and re-built in regular rows, devouring the authorities with their eyes.

Meanwhile, on Tuesday, the press service of the Ministry of Internal Affairs reported that from the beginning of the operational search activities, the total amount of money and valuables seized that may belong to the participants of the fraudulent schemes has already reached about 700 million rubles.

It became known that Smetanov was not released under house arrest. During the consideration of the issue of her arrest in the Khamovnichesky Court, the investigator had previously stated that she could escape on a service plane of the Ministry of Defense. According to him, a similar precedent has already been: Smetanova, under the guise of an employee of the department of property relations of the military department, flew together with Evgenia Vasilyeva to Paris from the Moscow-based Chkalovsky airport on a departmental aircraft.

In addition, the investigator cited evidence that the staff of the “Legal Support Center“ Expert ”contributed to the destruction of documents that are evidence in the“ Oboronservis ”case, reports RIA“NewsSo, this sorrowful work, if Smetanov were outside the chamber, can continue.

Meanwhile, experts continue to discuss the results of the reform of the Russian army under the leadership of Serdyukov. And I must say that their conclusions, to put it mildly, contradict the assessment that Dmitry Medvedev gave to the activities of the ex-minister. Immediately after the dismissal of Serdyukov, the head of government, we recall, said: "Serdyukov was an effective minister of defense, this was manifested during the transformations that he carried out in the armed forces." And here, for example, the ex-chief of the Main Financial Department of the Ministry of Defense, Colonel General Vasily Vorobyev, stated that the so-called “outsourcing reform” (that is, the transfer of troop service functions to civil organizations) was “permeated with corruption”. “In particular, the budget expenditures for providing power to the compounds and parts on the principle of outsourcing, according to mine, are far from complete, the calculations have increased more than tenfold,” he told Interfax. Pretty "efficiency", what can we say ...

The fact that Serdyukov was in fact, to put it mildly, an unimportant minister, indirectly confirmed, oddly enough .... Putin All at the same press conference at which the “37 year was mentioned”, the following passage was heard from the president: “I draw your attention to the work of the adviser (and the media just reported about the possible appointment of Serdyukov as adviser to the head of the Rostekhnologii corporation - note KM.RU) is not connected either with property management, or with management of some labor collectives. This is a purely expert work. ” That is, the property and management of Serdyukov should not be allowed, but let him advise. An indicative statement, what could be there ...

Only there is one thing: if Serdyukov is not capable of anything except giving advice, then why was he held for so long at the head of the Ministry of Defense? And shouldn't the one who appointed him be responsible for this?

Russian businessman and chairman of the International Anti-Corruption Committee Valery Morozov writes in his blog on the Snob website: “There is no doubt that Serdyukov will be arrested in the coming days. If this does not happen, then it will be possible to begin the countdown of the remaining days for Putin in the Kremlin. Having left Serdyukov free, Putin will take on the treachery. ”