70 Millions of Foreign Migrants for Russia

November 22, 2012
194
After the President’s approval of the Concept of State Migration Policy, designed for the period up to 2025, opinions began to be expressed on how to make illiterate foreign citizens who do not even know the basics of the Russian language stop to go to Russia, and only highly qualified specialists began to arrive having serious work experience and a decent level of education. It is noteworthy that for the time being all the talk on this matter remains nothing more than talk, deprived of a concrete thoughtful basis. 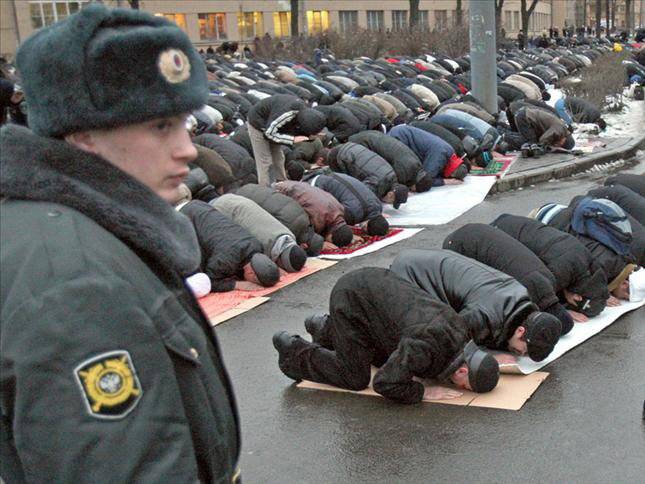 In particular, not so long ago, the State Duma deputy representing United Russia, Gadzhimet Safaraliev, spoke out about the need to attract high-class specialists from other states to Russia. Safaraliyev heads the Committee on Nationality Affairs and is working on legislative support for national state policy. The legislator believes that the development of Russia without migration is impossible, and gives weighty numbers of foreign migrants who can allow the country's economy to develop dynamically. According to him, the country needs about 50-70 million foreign migrants to whom it is necessary to make quite serious demands. One of these demands is that the deputy Safaraliev sees the knowledge of the Russian language and culture of the region to which migrants go in search of work. In addition, the head of the Committee declares the need to work with countries, let's say, donors, to create some adaptation centers on Russian territory.

Of course, Russia would not have refused the numerous experienced specialists arriving on our territory from other states. I would not refuse that each of these qualified employees of various enterprises could speak Russian, understand local traditions, know the cultural characteristics of the local population. However, the figures named by Gadzhimet Safaraliev look too frightening. If we consider that the very Concept of State Migration Policy (KGMP) states that the population of Russia could reach 2025-142,8 million by 145,6 in the year, the figure in 70 of millions of foreign migrants raises the question of so-called national identity in the country.

If today we can’t create a clear legislative base for controlling the activities of 3-5 of millions of foreign migrants (according to data from the KGMP) who work almost permanently in Russia, then what about the 70 million-strong army of foreigners who are ready to work for the benefit of the development of Russia and make money for yourself. How much will it be necessary to build those very adaptation centers for labor migrants in the territory of the Russian Federation in order to teach the language and instill respect for culture among tens of millions of foreigners. For this, it is necessary to detach not just huge funds from the state budget, but astronomical funds.

At the same time, it is difficult to imagine that labor migrants, moving into Russia, would move exclusively towards uninhabited areas of Siberia and the Far East in order to bring these regions to the forefront of economic positions in the country. Even if one assumes that a third of the millions of “qualified” foreign migrants declared by Safaraliev will rush to the Far Eastern and Siberian regions, this could provoke a real socio-economic crisis. The fact is that such a huge number of people will have to provide not only jobs, but also housing, medical care, other social protection clusters. After all, the deputy is not going to settle millions of foreign citizens who arrived to work in Russia, in abandoned barracks or in the taiga ... Presumably, they are not going to feed them either.

Perhaps, in this case, as a solution to the problem, it seems that the migrants themselves should build housing for themselves, medical and educational institutions, feed themselves, heal and teach, buy from themselves, sell themselves. Taxes? .. Sorry, but with migrant taxes we have so far and with fewer foreign “workaholics” everything is not transparent.

When the country still has not solved the problems with kindergartens, hospitals and other important objects for, let's say, the indigenous population, to launch an “unconditionally qualified” multi-million horde to Russia - a step more than doubtful.
Let us not forget that the mass entry of migrants into the Russian Federation must be viewed not only in an economic sense. Even if we assume that millions of people, for example, Central Asia, will rush to the same Far East and turn this region into a garden city with oriental bazaars and festive skullcaps, then ethnic imbalance may eventually begin to manifest itself. Considering that nowadays no more than 6,5 of millions of Russian citizens live in the Far Eastern region, the situation with the arrival to these territories of a couple of tens of millions of foreigners with other ideas about life in general raises certain concerns. After all, let us not build illusions that Germans, French or British polls with two higher educations and verbatim knowledge of all the works of Tolstoy and Mayakovsky will flood into the Primorsky, Khabarovsk and Kamchatka regions, and begin to forge the well-being of the Eastern Federal District itself, not working their German, French and British hands. But the Germans, the French and the British at home no longer know what to do with the millions of labor migrants, a certain percentage of whom are mediocre with legal labor.

It turns out that lawmakers want our country to repeat the European international impasse. Only in the same Germany, the resettlement of the indigenous population is fairly evenly throughout the country, and we only have to dream of such uniformity. In this regard, an invitation to Siberia and the Far East of tens of millions of foreign migrants is a “blue-plate saucer” for those who then take advantage of a territorial gift, not without pleasure.

Of course, the author can be blamed for the fact that he is a dog in the hay. They say that the whole region is “empty”, and he criticizes the initiative for the introduction of foreign migrants ... However, if lawmakers want to reassure themselves that at least someone should live in the Far East, if only statistics on demography were acceptable, then they would case you should start with yourself. Why? It is possible, as a research work, of deputies of both chambers of our Parliament to be sent for permanent residence to the region, the problems of which they are so seriously concerned about. Only send without a suite, without “blue buckets”, to bare ground, or, for example, to buildings that, according to reports for the federal center, constitute capital housing that does not need repair, but is actually assembled from boards, who finally rotted back when many deputies were at a tender age. And when this experiment begins to bear the first fruits: there will be schools, hospitals, kindergartens, sports complexes, normal housing, then in general it will be possible to say “why do we need millions of foreign migrants; like the hands from that place grow up! ”