The politicization of the tribunal in The Hague: an indulgence for the murderers of the Serbian population 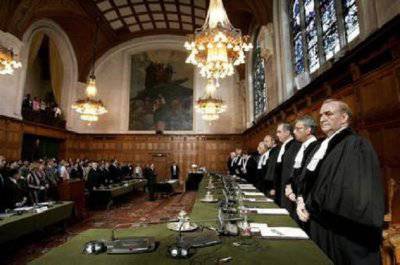 The oddities of so-called international justice were fully revealed at the end of last week. If before 16 in November 2012 there were certain doubts about the expediency of the existence of the so-called Hague Tribunal for the Former Yugoslavia, then it was 16 on the same day of this month that these doubts grew into a firm conviction about the utter senselessness of this organization calling itself international.

The fact is that last Friday the ICTY Appeals Commission was by no means an overwhelming majority (three judges against two) spoke in favor of completely removing the charges from two Croatian generals. General Mladen Markach, who commanded special police units during Operation Storm in 1995, as well as General Ante Gotovina, who commanded Operation Storm itself in 1995, was released right in the courtroom ... Not guilty, you know, and everything here ...

The decision of the Appeals Commission of the Hague Tribunal took place a few months after the lawyers of two Croatian generals appealed against the decision of the ICTY Main Commission, who condemned these people in uniform for ethnic cleansing and forcible deportation of thousands of Serbs in the Republic of Serbian Krajina and Western Bosnia. According to the verdict of the main panel of judges, Gotovina initially received 24 years of imprisonment, and Markach - 18 years. At that time, this decision of the International Tribunal looked like a manifestation of real impartiality in terms of the ethnicity of the defendants. However, the decision of the Appeals Commission of the model 16 in November 2012 of the year puts an end not only on the adequacy of the MJTB itself, but also completely on the western justice system, which suffers from amazing one-sidedness.

Recall that Generals Gotovina and Markacs commanded units of the Croatian army and police in the summer of 1995. At the time, soldiers of the army of Bosnia and Herzegovina acted together with the Croatian troops. The main task of the so-called coalition forces during Operation Storm (Oluja) was the complete elimination of such republics as the Serbian Krajina and Western Bosnia.

A small historical and geographical reference.

The Republic of Serbian Krajina was formed after the collapse of Yugoslavia (Yugoslavia) in 1991. It occupied about 17 thousand square meters. kilometers of territory that today belongs to Croatia. According to a study conducted at the beginning of 1992, about 52% ethnic Serbs, about 36% Croats, and 12% were from other nationalities (Bosnians, Bulgarians, etc.) lived in the territory of Serbian Krajina. The city of Knin with a population of about 14 thousand people was chosen as the capital of the unrecognized state.

The autonomous region of Western Bosnia was formed in September 1993 of the year in the territory belonging today to Bosnia and Herzegovina. The administrative center of the autonomy is the city of Great Kladusz with a population of no more than 8000 inhabitants. On the territory of Western Bosnia in the 1993 year there were several thousand Serbs.

After the joint operation of the Croatian and Bosnian troops, the Serbian Krajina and Western Bosnia disappeared from the motley map of the former Yugoslavia, but they disappeared not just as geographical names, but also as administrative territories along with tens of thousands of Serbs (in total in two republics). According to the most modest estimates, the “Storm” of the Croatian and Bosnian military and police formations destroyed more than 1000 civilians in just one 5 day of operation. In addition, Croatian units, under the personal orders of Gotovina and Markać, conducted very dubious stripping operations, striking even those who were in the temporary camp for immigrants, opened immediately after the start of the campaign. These attacks led to massive civilian casualties. The wounded after the Storm alone were counted by at least 3 thousands of people. One can imagine the frenzy with which this “mission” was carried out, if in just a few days thousands of civilians became its victims.

However, the killing of civilians in Serbian Krajina and Western Serbia is not all the “achievements” of Markac and Gotovina. According to several international human rights organizations, the Croatian-Bosnian strike led to the fact that about 200 thousands of Serbs were forced to leave their homes and move to Serbia or the Republika Srpska in Bosnia and Herzegovina. The relocation of such a large number of civilians in such a short period of time under the incessant shelling by the Croatian military and police units is a real humanitarian catastrophe provoked by the then Croatian leadership. The Croatian authorities did not prevent the atrocities committed by the fighters of Gotovina and Markac in Serb Krajina. The villages were burned along with their inhabitants! According to some reports, several hundred Serbs who, for various reasons, could not leave their homes during Operation Storm, were killed during those same sweeps.

As we are well aware, people who committed such a number of crimes simply cannot go unpunished, especially since the Hague Tribunal was created to study the archives and identify the most cruel representatives of the peoples of the former Yugoslavia who participated in ethnic cleansing, forcing for mass deportation , executions of civilians, destruction of property. Not only to identify, but also to punish the perpetrators.

But it turns out that the Hague Tribunal is itself a legal incident in which people who receive the right to judge other people turn into apologists for the bias and ethnic differentiation of the defendants. The ICTY Appeals Commission, with three votes against two, acquitted Markach, Gotovina and another general, Ivan Chermak, not finding the corpus delicti in the actions of these people.

The commission ruled that Croatian generals were not guilty of killing civilians, of forcibly evicting Serbs, of attacking columns of refugees, or of destroying property left from Serb residents of the Republic of Serbian Krajina. Moreover, some of the “proofs of innocence” of generals are completely unaffected by criticism. In particular, a certain working group of the International Tribunal for the Former Yugoslavia, which included some “technical experts”, was able to answer why so many civilians died as a result of a fairly short-term operation. The experts came to a startling conclusion: it turns out, Croatian generals gave the order to fire artillery shells solely on the Serbian military units, but the wind in August 1995 of the year blew so that the shells literally drove down on the houses of peaceful Serb residents. When other experts said that such a conclusion of the commission is more like the reports of a branded person who does not understand anything about military equipment, the “experts” were the first to decide to strengthen their position. They provided calculations that, in addition to the wind against the Serbian civilians, it turns out, the air temperature also came out ... They say that the shells under the influence of the high temperature of the air masses, as well as under the influence of the winds, carried it away only to where the civilians were. In general, in this situation, how can Croatian generals be to blame? .. Here you can make a claim to Newtonian physics, the theory of thermal motion of microparticles, the wind rose on the Balkan Peninsula, but not Gotovina, Markac and Chermak and their punishers ...

Such a decision of the ICTY Appeals Commission, to put it mildly, surprised not only the Serbs, but also some very reputable representatives of the Hague Tribunal itself. In particular, the judge of the ICTY, Fausto Pocar (Italy), said after the commission’s acquittal was passed: “I totally disagree with the decision of the majority, which contradicts any understanding of justice.” Pocar and a number of other judges of the Hague Tribunal cannot understand at all how to justify the people who themselves, judging from the numerous documentary evidence, gave orders to destroy the civilian population and level the whole Serbian villages ...

However, by and large, the decision of the Hague Tribunal is not surprising. The fact is that it could long be renamed the International Tribunal for the crimes of predominantly Serbs.

Judge for yourself, over the years of the existence of this unique international body working under UN patronage (since 1993), 100 processes against Serbian politicians and military personnel have been and continue to go on here. The proceedings were against such people as Serbian President Slobodan Milosevic, who according to the official version died during trials about his involvement in crimes, General Dragomir Milosevic (received 33 of the year in prison), President of the Serbian Krajina Milan Martic (received 35 years of imprisonment), Prime Minister Serbian Minister Nikola Shainovich (received 22 year of imprisonment). Dozens more Serbs have been convicted.
During the same time, 2 Montenegrin was convicted. Another one was also accused (captain of the 1 class Kavachevich), but he was declared insane.
In the ICTY, the cases of 32 Croats were heard, among which there were no representatives of the country's highest political authorities. At the same time, less than half of Croatian defendants received real terms. 6 processes have been postponed or completely stopped for obscure reasons.

5 representatives of Bosnia, 1 Macedonian and 3 Albanians were convicted. Moreover, the court panel issued acquittals to such representatives of the Albanian side of the conflict as the guards of the concentration camp, as well as the general of the Croatian army. Apparently, in the ICTY in general, the Croatian generals breathe unevenly, no matter where they are during the conflict.

Many Serbian politicians and journalists see in such an electoral system of administration of justice that the tribunal in The Hague has never been an independent punitive body. It is more dependent on the political mood of the West. And in general it is difficult to imagine the work of the Tribunal independent after the NATO bombing of Serbia in 1999. Today, by the way, the ICTY is headed by the American Theodore Maron, who would not be amiss to raise the archives relating to those events when American bombers dropped multi-ton bombs on peaceful Serbian cities. It is difficult to understand the logic of finding a person from a country at the head of the International Tribunal who made every effort to really blow up the Balkans ...