In the 2014-2016 years, the Russian Navy will replenish three rear support vessels of the Elbrus type 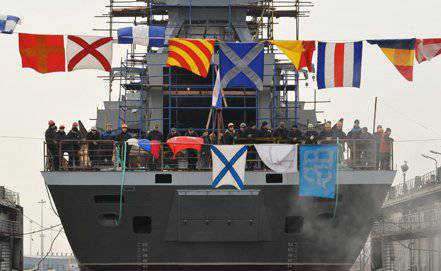 According to the commander in chief, ships of this type will be based on the Northern, Black Sea, and Pacific fleets. With the help of such supply vessels, they will be loading, storing, transporting and transferring dry cargo to the shore and to various ships, they will be used for towing, assisting ships and ships in distress.

According to Alexander Ushakov, director general of the Severnaya Verf, the company’s plan is to build six frigates of the near and far sea zone of the Admiral of the Soviet Fleet Gorshkov type (project 22350) and six corvettes of the near sea type Steregushchy (projects 20380 and 20385 ), as well as the communications vessel of the 18280 project "Yuri Ivanov" for the Russian Navy. All of these ships will be part of the Russian Navy before 2020, the shipyard’s chief said.

"Northern Shipyard" originates from the "Putilov Shipyard", which was founded on November 14 as part of the Joint-Stock Company of the Putilov Works in order to build ships for the Russian Navy. In Soviet times - the plant named after A.A. Zhdanov. In 1912, the plant was one of the first in the Russian Federation to receive licenses for all types of work in the field of construction, refurbishment, modernization and recycling of ships and vessels.

Severnaya Verf was repeatedly subjected to large-scale reconstruction, during which a whole complex of unique structures and facilities was created. For many years history The plant was built around 400 ships and vessels for various purposes. Among them are about 170 ships for the Navy of Russia and the USSR, a number of export orders.