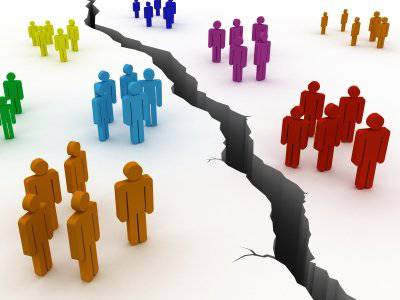 It is no secret to anyone that Russian legislation is often based on Jesuit logic, inconsistencies and omissions. All these flaws create "muddy water" in which it is impossible to find complete solutions to a huge mass of problems.

After the collapse of the USSR, Russians de facto became a divided people, which on the former national outskirts, which became overnight “sovereign states”, are still second-class rights, feeling all the “charms” of the realization by their respective titular nations of their rights to self-determination. Of course, this picture needs dozens of reservations in relation to each specific state of the post-Soviet space. Of course, the intensity of interethnic confrontation over the past 20 years has significantly decreased. But it is also obvious that for any Russian person who, not voluntarily, turned out to be a foreign citizen in relation to his historical Russia, as before, remains the place where you can leave if there are no prospects at all in the country of residence to establish your own life and ensure a decent future for children. According to recent sociological studies, about 52% of Russians living in CIS countries are more or less inclined to move to Russia.

So, with the existing legislation on this part there are big problems.

In 1999, the Federal Law “On the State Policy of the Russian Federation towards Compatriots Abroad” was adopted, which for the first time described the outlines of these obligations of Russia, introduced the definition of the concept “compatriot abroad”. In accordance with this, the first edition of the law, the representatives of the titular nations of the newly formed states fell under the category of compatriots. At the same time, this law did not provide for any substantial obligations of Russia related to the right of compatriots to repatriate. More precisely, there were certain declarations, but their implementation in concrete, sectoral, legislative acts was half-or-all or absent.

More specifically, for example, the Federal Law “On Citizenship of the Russian Federation” established (and still establishes) the right of admission to Russian citizenship in a simplified manner only for certain categories of persons who may not be compatriots.

Here, of course, the devil will break his leg, because the legislators did not dare to give a more precise definition and did not go without reservations (“as a rule”), which allow one to interpret this rule as one likes. But from this wording, it is nevertheless clear that the representatives of the indigenous peoples of Russia are considered to be “first approximation” compatriots. By the way, the very phrase “peoples historically living on the territory of the Russian Federation” is already a great progress, because such a construction first appeared in Russian legislation for the first time. And it, of course, “cuts off” representatives of the titular nations of the respective states.

But how to realize this right in practice? It is necessary to take into account some features of Russian lawmaking. First, in the Russian legislation it is actually forbidden to use ethnic differentiation, that is, it cannot be written down that the right to simplified citizenship should be given only to Russians and no one else.

Secondly, the very "muddy water" and the very "reticence" were embodied in the fact that Russian legislation does not contain a list of "peoples historically living in the territory of the Russian Federation". And if he had been, then, thirdly, there are no legally prescribed procedures for certifying the nationality of either Russian or foreign citizens applying for Russian citizenship.

Of course, both the list of peoples and the documentation of nationality must be entered. This is beyond doubt. But nevertheless, they are well aware that with the existing approach, which the Russian authorities use to solve these issues, this is simply impossible! Sorry, impossible.

Therefore, we have what we have. Although we have a more specific, but vague notion of “compatriots abroad”, which all foreign Russians and representatives of other indigenous peoples of Russia unequivocally fall into, and “in the first approximation” representatives of the title nations of foreign countries do not fall. And we have a declaration on the right of these people to receive Russian citizenship in a simplified manner.

It must be assumed that it was on the basis of these considerations that the legislative initiative of senators Ilyas Umakhanov, Vladimir Dzhabarov and Vyacheslav Fetisov was submitted to the State Duma, which involves the introduction of a simplified procedure for accepting compatriots into Russian citizenship. In accordance with it, a compatriot is entitled to receive a Russian passport without observing the five-year period of residence in Russia, without confirming the legal source of existence and without passing the exam on the knowledge of the Russian language.

But what immediately began here! In the midst of the "Russian National Democrats" began a tremendous commotion. Some of the headlines are worth it: "Replacing the indigenous population," "Now any Central Asian can instantly receive Russian citizenship," "All Central Asian people will be granted citizenship and immediately taken to the polls." ... No one bothered to read and understand the essence of the initiative, no one bothered to analyze real (REAL!) opportunities for the implementation by Russian of the rights to simplified citizenship under the current legislation. “Tunnel thinking” about the intrigues of the “anti-Russian regime” worked. And if at least someone bothered, he would have come to an unequivocal conclusion: under the current legislation, there are no other possibilities to provide such a right to Russians abroad. Again, unfortunately.

So you "checkered or go"? We want to solve the problem or do we want to ritually trumpet the whole of Ivanovo about the crowds of Central Asians, who will immediately take advantage of this norm? The second is more interesting and entertaining. But with the second big inconsistencies.

The fact is that "crowds of Central Asians" obtain Russian citizenship on completely different grounds and bypassing the law on citizenship. How do they do it? Elementary!

So, just to illustrate: in accordance with this Agreement with 1997, the citizenship of the Russian Federation was acquired by more than 300 000 citizens of Kyrgyzstan, of whom, according to official data, 60% are Kyrgyz, 20% are Russian.

And then there is the Agreement between the Republic of Belarus, the Republic of Kazakhstan, the Kyrgyz Republic and the Russian Federation on the simplified procedure for acquiring citizenship. And according to it, the same Kirghiz, Uzbeks from Kyrgyzstan and Kazakhs can receive Russian citizenship.

And there is another remarkable international legal document of its kind - the Treaty between the Russian Federation and the Republic of Tajikistan on the regulation of dual citizenship issues. In accordance with this Agreement, a Tajik may not even refuse a Tajik when acquiring Russian citizenship!

Therefore, all moaning about the influx of Central Asians, if Russia, in accordance with the aforementioned bill, gives Russians the right to simplified admission to Russian citizenship, is better to stop, because the topic of Central Asians is “revealed” by international agreements of the Russian Federation. And if you put the question squarely, you need to demand that Russia withdraw from these agreements, because they create the conditions for the mass legalization of Central Asian migrants in our country.

But I will even say more: there are no guarantees that the draft law will be adopted by the State Duma, even though it is more passable. The fact is that a similar bill, which Konstantin Zatulin submitted in October 2011, was rejected by the State Duma. Another initiative on the same topic from Senator Mikhail Kapura will also soon appear to be rejected.

So the storm of angry disturbances was in vain and off topic. But many of its founders have been well trained in rhetoric and eloquence.