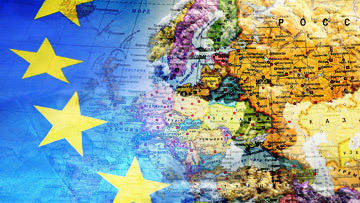 When Julius Caesar led his army back to Italy and was about to cross the Rubicon River, he knew that there was no going back. He threw lots, and everything depended on the result of the throw.

Neither the government of France, nor the government of Great Britain will see that partnership in the field of defense, which will be announced with such fanfare at tomorrow's summit. The British just recently published a review of the defense situation, in which they called their relations with the United States "exceptional." And the French all last year thought about how to reconcile the deepening of their relations with partners on the other side of the Channel with their ambitions for organizing a common European defense.

Despite all this, tomorrow's meeting will mark a new stage. The width and depth of the specific cooperation schemes that will be announced will not have precedents. But the real significance lies in the tacit recognition by both sides of the fact that their own claims to the status of world powers will retain their validity only if they combine their defense resources and efforts. Given that they have no money, they will have to do it, and there will be no going back.

For both sides, this is a great and bold undertaking, and both sides deserve applause. It was especially difficult for the British: they organized such a complex scheme, at the same time preparing an overview of the situation in the field of defense and reducing the very heavy program of investing in defense.

But the urgent question arises: what about the rest of the European countries? Of course, this question is of concern to the Poles, who have decided to make the all-European defense a key topic of their EU presidency, which they will get in the second half of 2011. The Poles worked with the Germans and the French - partners in the "Weimar Triangle" - to give a new start to Europe's sly attempts, perhaps using the conditions of the Lisbon Treaty to create pilot defense projects. Within the framework of this system, defense cooperation programs could be limited to small groups of serious EU countries, with the composition of the groups changing from sphere to sphere (some would be engaged in science, others in technical support, etc.). But will the French now pay attention to anyone other than the British? And will the new Anglo-French Entente knock the ground out from under all other forms of European cooperation?

The British, of course, will look at all these questions in a somewhat detached way. The Poles have a lot of supporters both in London and in Paris, so that tomorrow’s Franco-British declaration will also say a few kind words about Poland. But the British, knowing that nothing good had come out of Brussels (especially with regard to defense), would decide that it was time for the continental countries to figure it out for themselves.

Of course, this is just one of the options. Depending, in particular, on how ready and able to play two games at once will be the French, one can imagine that the new Entente will have a stimulating effect on other European partners and will give them an incentive to make real efforts to form closer cooperation with each other. friend and without engaging UK.

The reverse is just as likely: that the majority in Europe will decide to pass. The financial situation is extremely difficult, and it is becoming more and more difficult for taxpayers to explain why it is not necessary to reduce the armed forces even more. There is no serious military threat to Europe, and the idea of ​​foreign intervention has been compromised by an Afghan misunderstanding. So many Europeans will decide that if France and the United Kingdom want to continue to engage in such an anachronism as defense, then let them do it, and then Antanta can even contribute to the process that US Secretary of Defense Gates unhappily called the culture of "demilitarization."

The French do not share the indifferent attitude of the British to such a development. They understand (and the British do not understand) how much their power and influence on the world arena is tied to the European as a whole. In the active competition going in the modern multipolar world, the Europeans are in the same boat, whether they like it or not, and if the others stop rowing, then the United Kingdom and France, even continuing to row together, will still not rake.

And this suggests a third, more favorable scenario - that the Franco-British alliance will invite to itself those EU partners who are still considered “seriously” tuned in to provide assistance in the field of defense, and not by ensemble, but by industry, in depending on the area in which a potential partner can make a significant contribution to the common cause. The model should have variable geometry, be based on small groups and on partnership cooperation, with the United Kingdom and France being present as “constants” in each group, occupying a dominant position. In short, it should be something like a system of "pioneer groups", which was proposed by the Lisbon Treaty, but enforced without reference to "Brussels", taking into account the British allergy to this word.

Then the summit will have consequences that, over time, will affect whether European states and the EU as a whole can retain the status of a participant in the global process, or will they be increasingly repelled by younger, richer and more self-confident players. Whether for good or bad, it will depend on whether the two main actors are ready to selectively open their new alliance to the rest of the European partners, and on how these partners will react to this. But the die is cast, and, despite all the uncertainty, the bet is right.