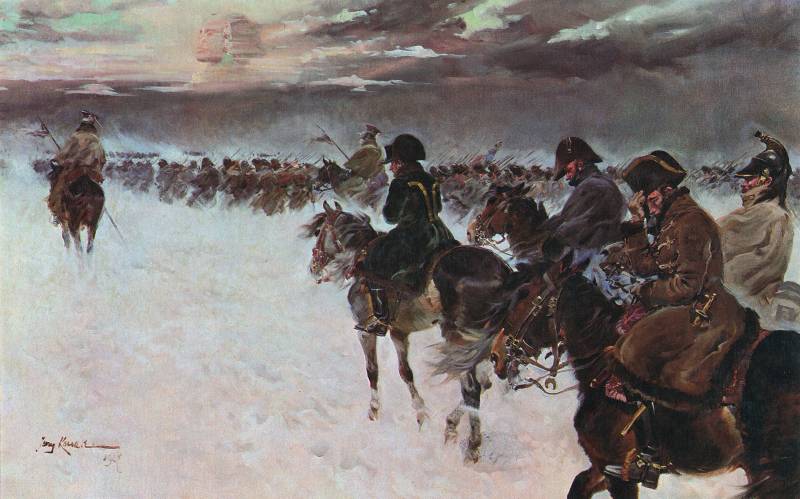 On January 6, 1813, the Russian sovereign Alexander I signed a manifesto on the "expulsion of the adversary" from Russia. Back in December 1812, the last remnants of Napoleon's "Great Army" fled Russia.

The myth of the winter general

Of the 600 thousand "Great Army", which included almost all of Western Europe, very few survived ("Army no longer exists"). Others died, froze, died of disease and starvation, were taken prisoner, became vagabonds.

The Russian sovereign decided to lay the Cathedral of Christ the Savior in Moscow to the glory of the Russian army, which defended its Fatherland. The Manifesto also ordered to celebrate the great Victory Day every year on the day of the Nativity of Christ.

Having reached Paris, Napoleon composed a legend, which other defeated generals willingly picked up, about a terrible enemy - the "winter general". This myth was refuted by contemporaries of that Great War: Denis Davydov and Henri Beyl (Stendal). “It would be a mistake to think that winter came early in 1812; on the contrary, the weather in Moscow was most beautiful. When we set out from there on October 19, it was only three degrees of frost and the sun was shining brightly, ”Stendhal wrote. Bonaparte himself repeatedly wrote to Marie Louise about how good and warm she is in Moscow. And near Tarutino, and near Maloyaroslavets (Furious battle for Maloyaroslavets) the weather was fine. She did not help the French.

Napoleon, having decided to leave the remnants of the army, left the city of Smorgon on wheels. He rode in a dormez, a large road carriage. Only more than two days later, already beyond Kovno, there was so much snow that we had to transfer to a sled. Here came the "terrible frost," as Caulaincourt wrote. It was approaching 20 degrees. So it was a normal winter.

Napoleon's great army perished even before the "terrible frosts". By the time the real winter began, pitiful fragments were already left of the army, except for the flank allied corps (Austrians with Saxons and Prussians). The army of the then "world community" was destroyed by the Russian army, which gave a number of battles to the enemy, army partisan (regular cavalry), Cossack detachments and all the people who slowly crushed the western reptile. Plus, the fatal mistake of Napoleon and his marshals, who decided to go deep into Russia, stretching his communications. Even the Great Army was not enough for a strategic operation of this magnitude.

After all, the Russians did not play by the enemy's rules. They did not allow themselves to be surrounded and defeated. They gave a decisive battle on the Borodino field, when they decided that it was time. They washed the enemy with blood, survived and saved the army. They left the ancient capital, but continued to fight, even though the Europeans believed that it was time to make peace on their terms. There was no peace, there were Russian bayonets, Cossack pikes and peasant pitchforks. Meanwhile, the French Grand Army was scattered, losing strength, part of it turned into crowds of deserters, robbers, marauders, having lost their combat effectiveness. Bonaparte had to get out.

Maloyaroslavets was followed by a rapid retreat of the French, attacked by our troops and partisans, to Smolensk, where Napoleon thought to stop. The French also had to quickly leave Smolensk. Defeat in a fierce 3-day battle near Krasnoye and a disaster near the Berezina (The death of Napoleon's Great Army on the Berezina). After the Berezina, the disorderly retreat turned into a run. Almost all corps, divisions and regiments lost their combat capability. In addition to the guard, but it has also extremely thinned out in its composition.

Napoleon's army was defeated by the Russian army, the Russian people, united in a just struggle against the invaders. Napoleon severely miscalculated when he started a war with Russia on its territory and invaded Russian lands. The European Games are over, a just war of liberation has begun.

The war with Russia was Bonaparte's fatal mistake. In his case, a bad peace with Russia was better than a good quarrel. The British, Austrians, and Prussians benefited the most from the French-Russian clash. Their competitors bled each other. Napoleon's empire could no longer stretch the role of hegemon of the Western world.

Napoleon still believed that everything can be brought back. Military happiness will return to him. Western Europe is subject to the French Empire. That was another mistake. Thus, the French monarch believed that he had large reserves in the form of the Prussian, Austrian, Saxon armies, armies of other allies and vassals. But big politics does not forgive mistakes, it was impossible to go back. Akela missed.

Napoleon himself expressed this situation with the famous phrase: "From the Great to the ridiculous - only a step."

As soon as it became known that the Great Army was no more, everything on the political map of Europe changed. The Prussian corps of York came out of the subordination of Marshal MacDonald. On December 30, an armistice agreement between the Russians and the Prussians was signed in Taurogen. This was the beginning of the Russo-Prussian anti-French alliance.

In France itself, it was alarming. An entire army perished in Russia. They neutralized the plot of General Male, who successfully carried out a coup d'état within a few hours. The dignitaries of France, without verification, believed in the fiction of Male about the death of the emperor and the creation of a provisional government. It was a Republican conspiracy. Male and his accomplices were shot, they tried to consign the case to oblivion. Male was declared insane. But the cunning politician Talleyrand clearly noted: "This is the beginning of the end."

The fight goes on

However, Napoleon was too early to bury. He was a man of great willpower and energy. It was not in his nature to wait for the enemies to come for him. He is used to going towards fate, into battle. In the struggle, his faith in a lucky star grew stronger. Bonaparte developed a vigorous activity in Paris. He was building a new army. His energy and efficiency were again unparalleled. The consciousness of danger tripled his strength. It seemed that the emperor looked 10-15 years younger. It was the young general again. Decisive and fast.

He even became better in communicating with people: simpler, more friendly. Napoleon became an affectionate and flexible diplomat. In long letters sent to the allies - the kings of Westphalia, Bavaria, Württemberg and other German rulers, he explained that one should not believe the Russian bulletins, that everything was going fine. Of course, France and the allies suffered losses, but the "Grand Army" is still a powerful force. It has 200 thousand soldiers, another 260 thousand can be put in the field and another 300 thousand remain in Spain. Huge army. But Bonaparte asked the Allies to increase their armies. The stronger the troops, the more true and honorable the world will be.

Napoleon at the beginning of 1813 already knew that the "Great Army" was no more. Always cautious in dealing with the emperor, Marshal Berthier, the chief of staff of the army, this time said briefly and dryly: "The army no longer exists." In particular, only the brave Marshal Ney remained from the rearguard of the "Great Army", which crossed the Neman.

Napoleon knew all this, but did not give up. He looked to the future. In a few weeks, he created a new French army. 500 thousand fighters. True, the price was huge. France was bled dry by endless wars. Already teenagers, sets of future years, were thrown into battle. France was depopulated: there were no men or young men left. The bloody moloch of war devoured the future of the French Empire.

On April 15, 1813, Napoleon left for the army. In the spring of 1813, he could still negotiate with opponents, retaining power and the dynasty. However, without the hegemony of France in Europe. Metternich persistently offered his mediation in achieving peace. Trumps were: the wounded French lion was still afraid, he was the best commander in Europe; France had a strong army, excellent marshals and generals; allied German kingdoms; the Austrian emperor and the Prussian king were afraid of a confrontation that could cause revolutionary ferment in their countries. A compromise could be found. It is clear that peace would not be lasting. But that would be a different confrontation. Napoleonic France had a chance to survive.

But Napoleon did not want to give in. He still believed in his star and army. He hoped that in the war he would solve all the problems. In a brilliant revenge. Another fatal miscalculation.