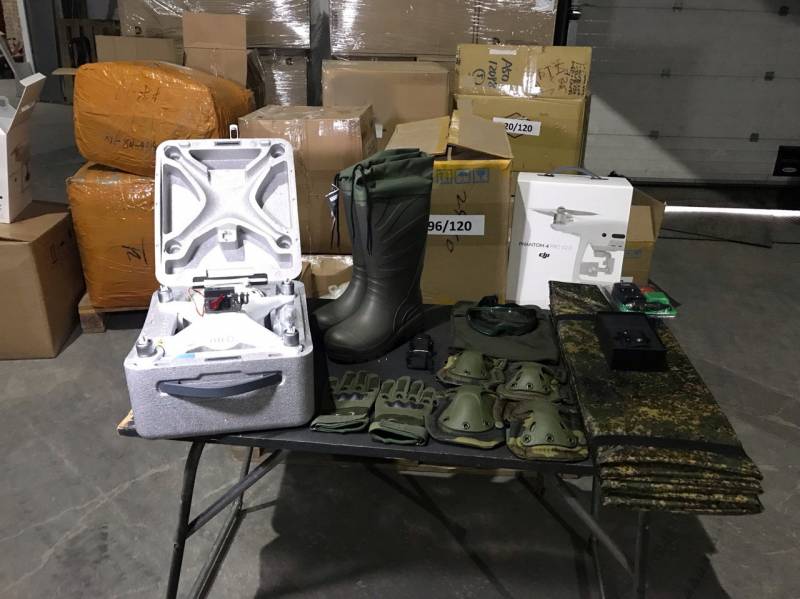 The MILITARY TECHNICAL SOCIETY from its warehouse in Moscow sent a batch of humanitarian aid to Yalta for servicemen participating in the Special Military Operation.


On Friday, December 23, thermal imagers, quadrocopters with cargo drop systems, batteries and chargers, mats (mats), hemostatic tourniquets, tactical gloves and goggles, fleece balaclavas, knee and elbow pads, rubber boots, as well as tactical evacuation cart. The latter is essential for the evacuation of the wounded from the front line. The TET-2/2 tactical evacuation cart can be carried by one person in the form of a knapsack. It can transport cargo and equipment with a total weight of up to 250 kg to the place of evacuation. The trolley can be unfolded and the wounded can be transported in a semi-sitting, lying state. It can be unfolded into a stretcher position. At the same time, the trolley itself weighs no more than 19-21 kg (depending on the manufacturer of the wheels). According to reviews from the front, the thing is extremely indispensable on the "front". The total cost of the humanitarian cargo is 8 million rubles. Members of the MILITARY TECHNICAL SOCIETY and their relatives collected this entire amount from personal funds.

After the humanitarian cargo arrives in Yalta, the administration of this city will send it directly to the unit, which is located at the front of the Special Military Operation.

Earlier, the MILITARY-TECHNICAL SOCIETY Interregional Public Organization for Assistance in the Study and Operation of Military Equipment received an appeal from the Yalta administration with a request to collect and transfer equipment and equipment.

This is another batch of special equipment and equipment that the MILITARY TECHNICAL SOCIETY handed over to the front. In the near future, the public organization will send an unmanned aerial vehicle suppressor (anti-drone guns) to Yalta. Now they are made at the factory.

Earlier, on October 19, the MILITARY TECHNICAL SOCIETY handed over to the Ministry of Defense of the Russian Federation a batch of humanitarian aid worth more than 10 million rubles. Then, for the needs of the special operation, army tents, generators, mobile heating systems, and fuel tanks were sent.

The interregional public organization for the promotion of the study and operation of military equipment "MILITARY TECHNICAL SOCIETY" was created as a union of like-minded people passionate about the study and restoration of military equipment of the Soviet period. For my six year history the organization twice got into the Russian Book of Records - for the longest mileage made in peacetime on military equipment, as well as for crossing the Kerch Strait on amphibious armored vehicles. The WTO became the only civil organization allowed to participate in the May 9 Parade on its own equipment (Victory Parade in Kaliningrad in 2019, and in 2022 in St. Petersburg). The organization has more than 40 units of unique equipment on its balance sheet - from the first serial Soviet armored personnel carrier BTR-40 to ZIL 49061 "Blue Bird" (an all-terrain vehicle designed to rescue astronauts after landing in difficult terrain).