The sad end of the Polish troops in Moscow

November 6, 2012
29
4-5 November 1612, the Russian soldiers under the authority of Minin and Pozharsky freed the Russian capital from foreign invaders. Unfortunately, in Russian schools, universities and the media rarely raise the topic, as the next European "civilizers" and "benefactors" of the Russian state ended their journey. And this is a very instructive lesson for the current generation of enemies of Russia, which perfectly shows their essence. The Polish invaders came to the point that they not only began to eat each other, but also to harvest human flesh in large vats and barrels for sale, to sell each other. Everything is in accordance with the "market economy" and the principle of "man-man wolf." The next bastards who hankered to the Russian lands and wealth finished their journey as they should. True, it is surprising that Russian liberals do not demand that European cannibals be erected in the Kremlin.

After the defeat of Hetman Khodkiewicz’s troops near Moscow in August 1612, the situation for the Polish garrison became critical. Prince Dmitry Pozharsky showed generosity and suggested that the Poles capitulate on honorable terms. They promised to let everyone go, provide the wounded and sick with carts. However, the proud gentry replied with rudeness: “The Moscow people are the kindest in the world and are courageous like marmots or donkeys ... do not write to us anymore about your Moscow nonsense, but you better, Pozharsky, let your people go to the pochs”.

The strength of the Poles is not due to their courage, but rather greed. They did not want to leave the stolen treasures, and not only the royal and church property, but from private individuals were robbed. So, the Poles even broke into the house of Fyodor Mstislavsky (he headed the Seven Boyars and participated in the election of the Polish Tsar Vladislav Sigismundovich to the Russian Tsar), all values ​​and food were selected, the boyar himself was beaten. As a result, greed outweighed prudence, the Poles remained in the Kremlin, although they were offered to freely leave for Poland, to ensure their security.

In September, a famine began in the Polish garrison — in August, a wagonload of foodstuffs could not be carried to Moscow, only Neverovsky's detachment (300 infantrymen) was able to break into the city. The invaders ate all the dogs, cats, birds, horses. The infantry of Neverovskiy were the first to die of starvation - they didn’t have their own stocks, and also had money to buy food from others. And it was not customary to share with Europeans, every man for himself. No money - die, do not disturb others. All within the framework of the theory of competitiveness. In early October, snow fell, closing the quinoa and roots.

Then, to wait for the approach of the king's army, Colonels Strus and Budila ordered the Russian prisoners and prisoners to be removed from the prison, they were slaughtered like cattle and eaten. However, this was not enough for long. Then they began to eat their corpses, to tear off fresh graves and to kill the weak, the sick. The strong devoured the weak, lost in gambling. There were cases when a relative killed each other. People began to disappear. They killed and ate the walking girls who were at the time of the Poles (around any European military contingent, all sorts of “business” people, harlots who helped the soldiers part with the good, were always treated). After the girls, set to the servants. Grabbed people from the street. True, few Russians remained in the fortress, some died during the clashes and fires, others fled, the third were expelled by the Poles themselves, as useless eaters.

The “civilized and enlightened” Europeans even traded in human flesh, which they procured. So, the human head was sold for three zlotys, the feet - two each. Boyars began to miss the servants and maids, who went out of the gate and sat in the estates, fearing a terrible fate. Among them was the future Russian tsar - Mikhail Romanov with his mother.

However, the Poles still refused to capitulate, although their forces quickly melted away: out of 3,5 thousand soldiers, no more than 1,5 thousand soldiers remained. October 22 (November 1) 1612, the Russian troops captured China Town. The remains of the Polish garrison held out in the Kremlin. In the face of starvation and a decisive assault, the Poles moderated their arrogance and went into negotiations. Initially, they still time, first released from the fortress wives and children of the boyars - extra mouths, then the boyars themselves. It was no longer possible to hold on. There was no talk of free passage, the Russian command presented a demand for complete surrender.

October 26 (November 5) 1612, the remnants of the Polish garrison surrendered and began to leave the Kremlin. Colonel Osip (Jozef) Budil with his soldiers, surrendered to the army of Prince Pozharsky and was pardoned. The last years of his life Budilo spent in prison in Nizhny Novgorod. The soldiers of Colonel Nikolai (Mikolay) Strusus surrendered to the Cossacks of Prince Trubetskoy, they were not so tolerant and killed the enemies. Strus himself stayed in Russian captivity before the Deulinsky truce 1619 of the year. October 27 (November 6) 1612 there was a ceremonial entry into the Kremlin of the warriors of the princes Pozharsky and Trubetskoy. Moscow was finally liberated from the enemy. 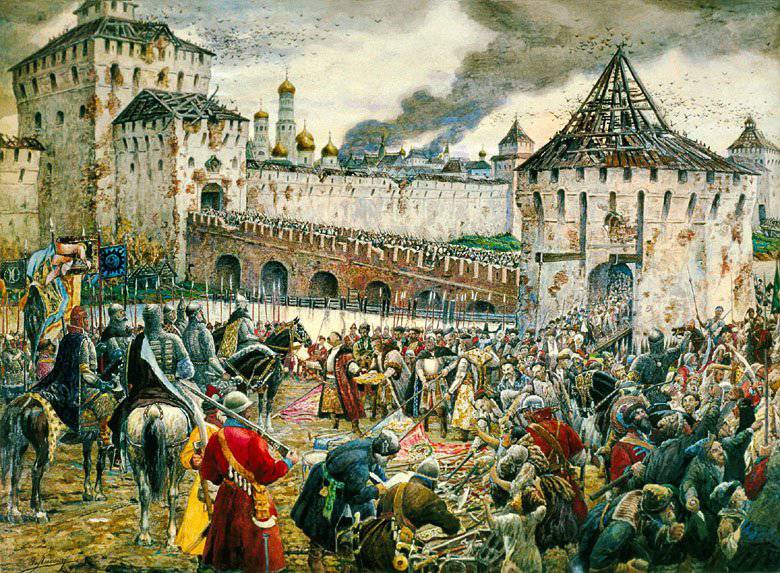 The Polish king Sigismund tried to get to Moscow, but could not even take Volokolamsk and retreated. It should be noted that although 4-5 November 1612 of the year is an important date in the Russian Stories, but you can not overestimate this event. Most believe that after this Time of Troubles is over. In reality, Smoot continued for many more years and blood flowed like a river. In particular, in the south, ataman Ivan Zarutsky resisted the new authorities (only in the spring of 1614, this center of the Troubles was suppressed), in the north, Cossacks Ataman Balovnya revolted, who were sent to war with the Swedes. In the spring and summer of 1614, the Cossack uprising covered a vast territory - the modern Vologda, Kostroma and Yaroslavl regions. Spring 1615 of the year 5-th. Balovnya detachment unexpectedly launched a raid to Moscow itself. The city was in a panic, since the main tsarist troops fought against the foxes who devastated the Russian lands. Thus, in Russia, units of the Polish-Lithuanian light cavalry under the direction of Alexander Lisovsky (after his death in 1616 year) were called, troops of lisovchikov were led by Stanislav Chaplinsky and Valentin Rogavsky) acting within the Russian kingdom in 1608 — 1617. The Moscow government managed to tighten the negotiations with Balovnev and pull up the troops, killed the ataman, captured his “thieves”. In 1618, the Polish-Lithuanian-Cossack troops led by Vladislav and Hetman Sagaidachny and Chodkiewicz broke through to Moscow and besieged Moscow. They could not take Moscow, but their breakthrough speaks volumes. In particular, on the way to Moscow, under the leadership of ataman Peter Sagaidachny, Zaporozhians seized Putivl, Rylsk, Kursk, Yelets, Lebedin, Skopin and Ryazhsk, the cities were devastated and burned, the Cossacks mercilessly exterminated not only the warriors, but also the peaceful population, not sparing neither women nor children. The Cossacks, before they joined the army of Vladislav, also captured and ravaged Yaroslavl, Pereyaslavl, Romanov, Kashira and Kasimov. Already united with the Poles, the Cossacks set fire to Serpukhov and Kaluga.

Thus, the liberation of Moscow on November 4-5 on November 1612 was not the final victorious act. Ahead were the long years of war, great blood and the destruction of the Russian land.