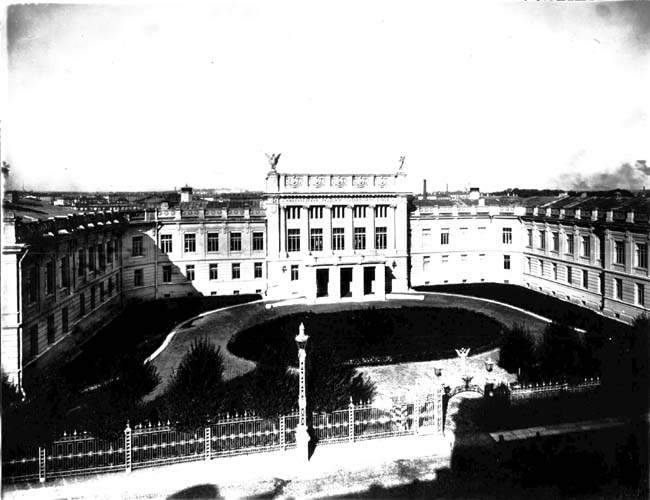 Nicholas Academy of the General Staff. View from Suvorovsky Prospekt

The idea of ​​creating a military scientific institution in the Russian state - the Military Academy, appeared in the middle of the XNUMXth century. It was expressed by the reformer and inventor, the author of the "secret howitzer", Field Marshal Pyotr Ivanovich Shuvalov. However, then this project, as well as the plan to create the Artillery Academy, were not completed.

After a series of wars with France, and especially the Patriotic War of 1812 and the foreign campaigns of the Russian army in 1813-1814. this issue is back on the agenda. With the establishment of permanent military formations - divisions and corps, which included all types of troops and were able to independently solve various tactical tasks, the introduction of states in peacetime and wartime, the organizational and staff structure of the troops became more complicated. It was obvious that the greatly increased role of the headquarters service required specially trained officers.

In 1830, Antoine Henri Jomini, a prominent military leader, theorist and historian, who was in the Russian service in the retinue of the emperor (in 1804–1813 he served in France, then in Russia), theoretically substantiated the idea of ​​​​creating an appropriate scientific and educational institution and developed a draft of its charter. The Academy was created in the capital of the Russian Empire at the General Staff for the education of officers and "for the greater dissemination of knowledge in the army."

The grand opening of the Imperial Military Academy in 1832 was timed to coincide with the day of the Order of St. George the Victorious - November 26 (December 8). Subsequently, this day of the patron saint of warriors became the annual holiday of the academy. The event was held with the presence of the tsar, the heir to the throne, the highest military and civil officials of the Russian Empire, as well as foreign guests.

The Academy was first located in the house of the former Foreign Collegium at 32 Angliyskaya Embankment. In 1901, the Higher School moved to a building specially built for it at 32 Suvorovsky Prospekt. 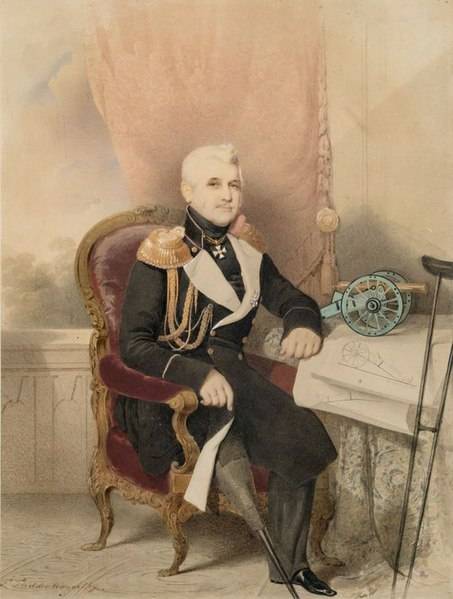 Ivan Onufrievich Sukhozanet (1788-1861) - Russian military engineer, artillery general, director of the Corps of Pages and the Imperial Academy of the General Staff (1832-1854). Portrait by T. Mayer, 1849

The formation of the academy took place under the leadership of its first director, General of Artillery Ivan Sukhozanet, who held this position for more than 20 years. Established two departments: the first - tactics, the second - military stories and strategies.

From 1832 to 1918, the academy trained 4 officers of the Russian army, several dozen officers of the Bulgarian and Serbian armies. Among the graduates of the school are such prominent statesmen and military figures of Russia as Dmitry Milyutin, Nikolai Przhevalsky, Fedor Radetsky, Dmitry Skobelev, Roman Kondratenko, etc. It is worth noting that graduates of the Nikolaev Academy will become active creators of the new Russian army - the Red Army. 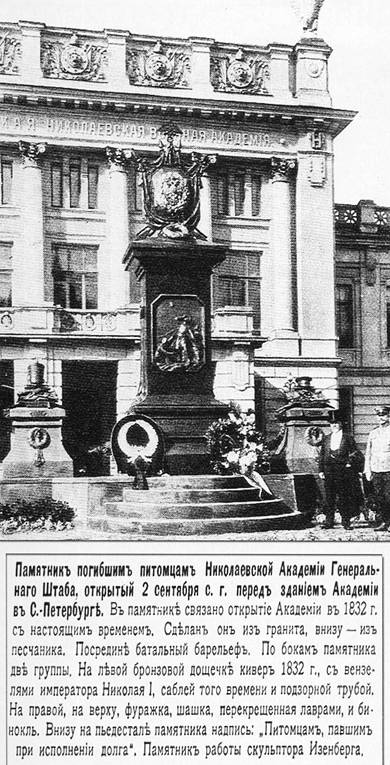 Monument to the dead pets of the Nikolaev Academy of the General Staff
After the February Revolution, the Provisional Government removed the word "Imperial" from the name of the academy, retaining the name "Nikolaev". In the spring of 1918, the academy, reorganized at the direction of Lenin, was evacuated to Yekaterinburg, then to Kazan. There, the bulk of its students and teachers went over to the side of the Czechoslovaks and the Whites.

In October 1918, the Revolutionary Military Council established the Academy of the General Staff of the Red Army in Moscow. The grand opening of the Soviet Academy took place on the same day as in 1832 - December 8. It was headed by a graduate of the old Nikolaev Academy, General Anton Klimovich. In August 1919, former Lieutenant General Andrey Snesarev, an orientalist, also a graduate of the Nikolaev Academy, became the head of the academy. During the Civil War, the academy and its courses were graduated by many prominent military leaders of the Red Army.

In the White Army, the academy operated in Yekaterinburg, then in Tomsk and Omsk, in the fall of 1919 it was evacuated to Vladivostok on the Russky Island. In 1923, part of the teaching staff, the library and the property of the academy returned to Moscow. Abroad, the White Guards opened Foreign Higher Military Scientific Courses, which worked until the start of World War II.

On August 5, 1921, the Academy of the General Staff of the Red Army was renamed the Military Academy of the Red Army by order of the Revolutionary Military Council of the Republic. The commander of the troops of the Western Front, Mikhail Tukhachevsky, became her boss. The Higher Military Academic Courses for Senior Commanders (HVAC) were established at the academy. A major role in their development was played by Mikhail Frunze, who was in 1924-1925. head of the military academy.

After the collapse of the USSR, the Academy retained its status as the leading higher military educational institution and scientific institution of the Russian Federation. 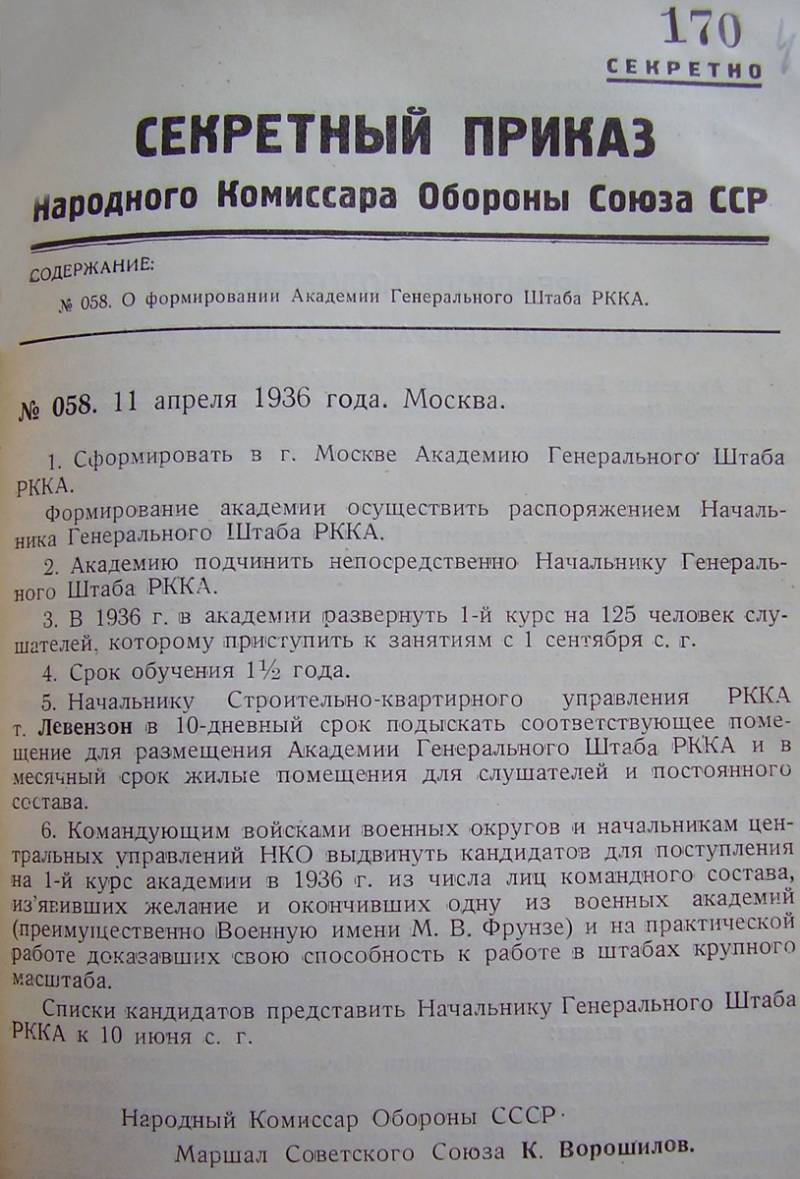