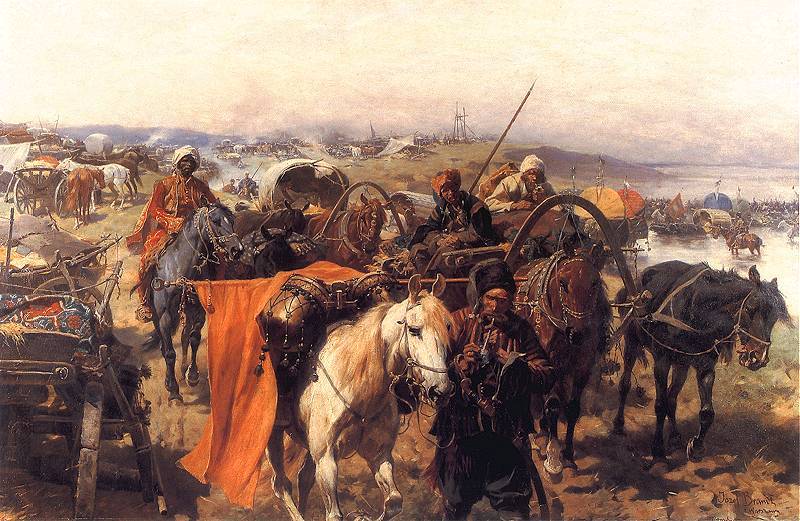 During the Troubles in the Russian kingdom, the Cossacks took an active part in the activities of the impostors and in the campaigns of the Polish troops in order to subjugate the Russian lands. Also detachments of Cossacks supported the Polish troops in the fight against the Ottoman Empire. The Cossack elite hoped for a reward from the royal power.

However, the Polish authorities continued their colonial, anti-Russian policy in southwestern Rus' (Russian resistance to Polish occupation; War for Russianness: the uprising of Nalivaiko and Loboda). They attacked the Russian faith (Orthodoxy). The Poles demanded from the Cossacks to submit to the landowners on whose lands their settlements stood, to refrain from sea voyages to Turkish and Crimean possessions, to destroy flotilla. This aroused the resistance of the Russian Cossacks, who were joined by the lower classes of the city, part of the clergy and the peasantry.

On the other hand, the wars between Poland and Turkey contributed to the deterioration of the position of the peasantry. The villages were ravaged by troops and various gangs, deserters. The lords came up with new requisitions to improve their position. The peasants fled to the east, looking for happiness in the Cossacks. This annoyed the big landowners. The Seimas in 1623 decided to dissolve the Cossack army, located on the lands of the Middle Dnieper.

The Cossacks refused to obey and revolted. He was supported by the Kyiv Metropolitan Job. The Kiev clergy asked Moscow to take Little Rus' into their citizenship. Such appeals and embassies from the Cossack hetmans, chieftains and clergy came to Moscow more than once.

In the Russian capital, such embassies were cordially welcomed, they provided material assistance to the rebels, but they were in no hurry to take "under the sovereign's hand". This meant a new war with the strong Commonwealth, whose king during the Time of Troubles almost became the sovereign of the Russian kingdom. On the other hand, the Cossacks and peasants seemed to the Russian government not very successful allies. It also happened that in Moscow they were just about to start negotiations, and the uprising was already crushed.

In September 1625, a 30-strong Polish army led by hetman Stanislav Konetspolsky invaded the Kiev region. Registered Cossacks retreated and united with the army of the Cossacks. The Cossack army met the Poles on October 25 near the town of Krylov on Tsibulnik. Negotiations began. The Cossacks asked to protect the Orthodox Church from the attacks of Catholics and Uniates, to destroy all government decrees directed against the Cossacks, and to grant them broad self-government, a special status.

Konetspolsky accused the Cossacks of unauthorized raids in the Black Sea, relations with Moscow and the Crimea to the detriment of Poland and the reception of various suspicious and undesirable persons. The hetman demanded surrender, limiting the register to 6 people, and extraditing the criminals. The Cossacks refused to submit to these demands.

On October 29, Polish troops stormed the Cossack fortified camp. Zaporizhzhya infantry was famous for its field fortifications and their defense skills. The Cossacks repulsed the attacks of German mercenaries, whom the Polish commanders used as infantry. The gentry themselves preferred to fight on horseback. In turn, the Cossacks made sorties, but they were repelled.

On October 30, both armies were preparing for a new battle. Deciding to take a more advantageous position, the Cossacks left the old camp at night and went to the Medvezhya Vine tract near Kurukovoe Lake (the current Poltava region). The Poles noticed the withdrawal and directed the pursuit, but it was delayed by the rear detachments, which suffered heavy losses, but completed their task. The Cossacks managed to build a new fortified camp.

On October 31, Polish troops stormed the positions of the Cossacks. However, they clearly overestimated their strength and failed reconnaissance. The area was wooded, swampy, which fettered the actions of a strong Polish cavalry. The frontal attacks of the Poles and Germans were repulsed, the enemy suffered heavy losses from rifle and cannon fire. The Cossacks settled in the lakeside thickets and contributed to the disorder of the Polish army. Hetman Konetspolsky himself wrote to the king that the Cossacks "did a good defense."

However, the Cossacks were still outnumbered by the enemy, there was no hope for help, as well as supplies to sit in a siege for a long time. Therefore, in early November, negotiations resumed.

The Cossacks chose a new hetman - Mikhail Doroshenko, who had previously been marked by participation in the campaign of Peter Sahaidachny against Moscow in August 1618, when the cities of southern Russia were taken and plundered. Doroshenko was supported by the Cossack foreman, who sought a compromise with the Polish authorities. The further fate of the former Cossack hetman Mark Zhmailo (Pavel Izmail) is unknown, apparently, he was killed during stormy "negotiations".

On November 6, 1625, the commissars of the Commonwealth, Sobieski and Balaban, were solemnly greeted in the field in front of the camp and escorted to Doroshenko's tent, where they took the oath of the common Cossack circle. The Cossacks promised to protect royal citizenship,

“We will give all kinds of obedience to our elders: do not go to the sea from the Dnieper, do not run into the Turkish Caesar, burn all sea boats, arrange with third-party gentlemen, except with the consent of the king ... do not create ... "
As a result, the Cossacks gave up the right to sea and land campaigns without the permission of the king and the opportunity to conduct an independent foreign policy. The register was reduced to 6 thousand soldiers who carried the border guards. One thousand Cossacks remained in Zaporozhye, the rest were located within the Kyiv, Chernigov and Bratslav voivodeships, obeying the authorities. The Cossacks entered in the register retained a number of liberties, the rest returned to their estates. The hetman was appointed by the Polish authorities.

It is worth noting that, although the Russian uprisings in Little Rus' were large-scale and posed a certain threat to Poland, but in general, for the time being, the Poles successfully crushed them. Popular hatred splashed out on the local lords and their managers (Jews), then the crowds of the rebels dispersed to their huts. The Poles went with fire and sword, burning out even a hint of resistance. They also acted by cunning, deceit and persuasion, splitting the rebels. Many Russians (Rusyns) believed in a "good king" who would curb predatory pans.

The Cossack foreman was quite satisfied with the Polish order and "freedom". But on the condition that they also become free lords. Ordinary Cossacks and peasants demanded an improvement in their situation. Inclusions in the registry and its extensions. So that Cossack deputies sit in the Sejm, and Orthodoxy is protected at the legislative level. The problem was that the Polish magnates, lords and the Catholic clergy did not want to make any concessions to the "schismatic heretics." They longed to eradicate the Russian faith and destroy the Cossacks as a masterful military force.

The Cossacks were too restless. Previously, it was useful for the border magnates, the Cossacks were needed to fight the Turks and the Crimean Tatars, other steppe dwellers, were used for the war with the Russian kingdom. The Cossacks brought rich booty, which flowed to their patrons.

But now the war with Turkey and the Crimea frightened the Polish magnates, they suffered losses. Their peasants fled to the Cossacks, who did not extradite the refugees. The Cossacks were ordered not to touch the Ottomans and Crimeans. And the Cossacks, even promising to fulfill the requirements of the authorities and local nobles, immediately violated all agreements, since they contradicted their fundamental interests. The Cossacks could not change their way of life, essence. They lived in war.

A total war between Poland and the Russian Cossacks was becoming inevitable.