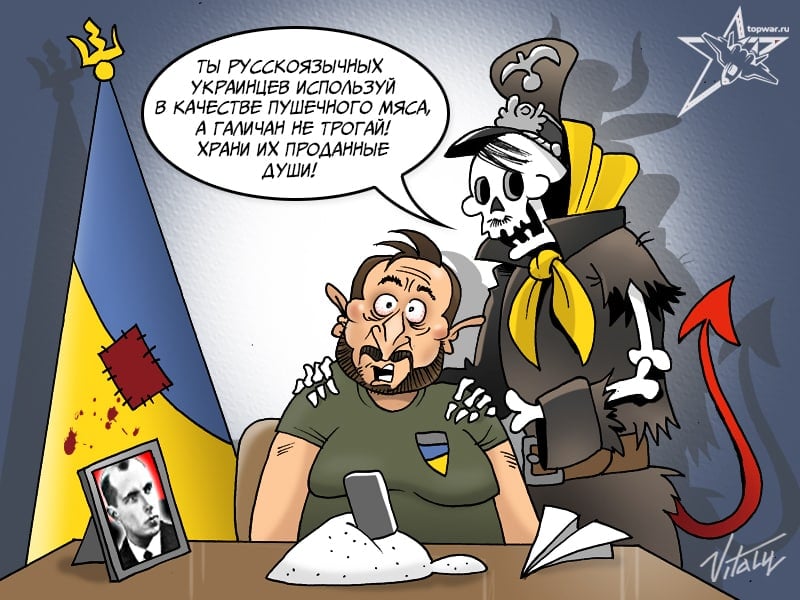 “Everything was clear.
The house was doomed. He couldn't help but burn.
And, indeed, at twelve o'clock at night he blazed,
set on fire from six ends at once.
Ilya Ilf, Evgeny Petrov "The Golden Calf".
For several years now, the press has been discussing the topic of the difference in mentalities of different regions of Ukraine. Everyone understands that the country is really different, patchwork, often not understanding and not accepting its own fellow citizens from other regions.

Ukraine is indeed very reminiscent of the hero of Mary Shelley's novel, the monster created by Victor Frankenstein. And the fate of the country, in terms of frequency of mention and interpretation, is similar to this character. The image of Frankenstein, as the image of Ukraine today, has been used and is being used by writers, directors and other creative people to create new horror characters.

Kyiv today is actively pushing the idea of ​​the unity of the Ukrainian people after February 24th. There are more recent storylines in this direction. Now the Ukrainian people have been united by the beginning of active shelling of Ukrainian infrastructure by Russian artillery and VKS. In fact, the same Frankenstein is being played again. The same monster assembled from parts.

So is the Ukrainian nation united today? Is the fact that the majority of soldiers and officers of the Armed Forces of Ukraine in everyday life and at the front speak Russian, judging by radio intercepts, even now, is a factor in uniting the citizens of Ukraine into a single political nation? Questions that we need to get answered, or at least understand why this is happening.

This is not a reflection on the topic, it is very relevant for determining the future of the country. The country that, I hope so, will remain on the territory of the former Ukraine. A different country, with different borders, with a different president and government, perhaps even with a different name. But countries ... Who will live in this country? ..

Why are there many more Russian speakers in the trenches than Ukrainians?

I think this question is the most relevant for most readers. As well as the question of the composition of the most radical nationalist organizations. It is no secret that after the surrender of Azov in Mariupol, many were shocked by the fact that many Ukrainian nationalists turned out to be ethnic Russians. And those Russians who over the years went to Ukraine also ended up in the ranks of nationalist battalions.

Let me express my own version of this fact. In my opinion, everything is quite simple. In the pre-Maid time, the nationalists could not boast of popularity. The usual percentage of radicals, as in any country in the world. However, the Maidan, or rather, the use of the nationalists as the main driving force of the coup, changed the situation.

Uniforms, hangouts, and this is how the first marches were perceived, the taking of some kind of oath in the squares, the whole external entourage of the gatherings of nationalists naturally attracted young people. And when it suddenly turned out that you would not be responsible for your antics, there was also a feeling of your own exclusivity. superiority over others.

Remember the slogans of that period? Ukraine is not Russia and so on? There were no talks about the need to destroy everything Russian and all Russians. It was then, at the next stage, that Svoboda leader Oleg Tyagnibok openly declared the need to destroy all Russians in Ukraine. Exterminate 5-6 million according to the lists compiled by the members of Svoboda, and the problem will disappear.

And then there was an opportunity not only to show off in front of the girls in uniform, but also to earn money. Do you remember how the authorities used right-wingers and other radicals for power actions? This is where the problem of Russians in the PS manifested itself. The paid actions were carried out mostly against pro-Russian organizations.

The most terrible crimes then were committed by Russian speakers. For the same reason, Russian speakers, for the most part, were the first to go to the front as part of the national battalions.

But this is only a small part of the fighters at the front. And why did ordinary Ukrainians go? After all, they are the main part of the Armed Forces of Ukraine. Here the usual craving of a simple person for a position of non-intervention worked. My hut on the edge in the classic version.

We are used to everything big. A big city, big plants and factories, etc. The settlements of Ukraine, including most cities, are small settlements in terms of population, where everyone knows each other. Kyiv is making a great move. He announces mobilization. First of all, for those who wanted to sit out and not participate in all this.

Remember the shots of this very mobilization. When men were simply caught throughout the settlement, like stray dogs. And straight to the front. Tie with blood. He participated in the war, which means he killed Russian soldiers. And then propaganda. Everyone who killed Russians will be sent to Kolyma or Novaya Zemlya...

I think now the amazement of Ukrainian prisoners is understandable when they are provided with medical assistance, when they are sent not to Siberia, but to the LPR or DPR, when they are kept in decent (for war) conditions. But it's time for an exchange. The desire to see the family, to return to a simple and understandable peaceful life overpowers the instinct of self-preservation.

Already when crossing the line of demarcation, the former prisoners understand that they have returned to that other reality. And again, out of fear and the desire to please those who meet them, they shout their slogan about glory. And then back to the front. Tied with blood, money, "famous" at home, which means, in the event of a victory for Russia, quickly handed over to the authorities by their own neighbors ...

I do not envy the Ukrainian soldiers and officers... The situation, frankly, is awful. Wherever you throw, everywhere is a wedge. Kyiv has created a situation where for those who heroically fight on the Ukrainian side, there is simply nothing left but "to the last Ukrainian." Participation in the database, alas, involves the destruction of the enemy.

So united or disparate?

The huge losses suffered by the Armed Forces of Ukraine forced Kyiv to take very dangerous measures. From the point of view of political stability, of course. Residents of western Ukraine began to be sent en masse to the war. Accordingly, coffins began to be brought back. This caused outrage among the people.

Before that, every death was perceived as a tragedy. The Internet was filled with videos of funerals and kneeling people. Now this video is rare. Is that the funeral of one of the Heroes of Ukraine. Kyiv is very vigilantly watching its segment on the Internet.

The President and his representatives almost on a daily basis inspire Ukrainians with the idea that in one trench, in one tank, and one crew of an armored car is sworn brothers, soldiers of one army, one nation ... Theoretically and practically, this is so. Today, Kyiv is not up to moral suffering and language problems at the front.

But look at Ukrainian social networks. For a long time, the events in the east of the country were perceived by Western Ukrainians rather neutrally. Well, there are some separatists, some collaborators. What are we? We have other problems. We need to plow, sow, build houses, etc. Now everything has changed.

The population of western Ukraine is mostly rural. The industry is much less developed than in the east, where most men work in some enterprises and receive a salary. The villagers, by virtue of the very organization of rural life, are very dependent on men. The main worker in the family. The breadwinner, if you will.

And this very breadwinner was taken to the war. Not only are women now forced to do the “male” work, it is also not known whether he will return at all. At the same time, people do not understand why their men have to die for some kind of east of Ukraine. Alien to them by faith, by tradition, by language and way of life.

Simply put, instead of the desired unification of the nation, Kyiv received an even greater rejection of the east and west. It is highly doubtful to me that even after many years this situation will change. Today we should talk about a new division of the people. Separation of the central and eastern parts of the country.

I am far from thinking that western Ukraine will rise up in protest against the actions of Kyiv. There will be some speeches, rallies, people's gatherings. But no more. This will not affect the Kyiv authorities in any way. Not that scale. But the internal division of Ukraine is not only preserved, but also intensified.

One and indivisible... already been

I already wrote that Ukraine, as one of the largest states (even after the rejection of Crimea and 4 regions) of Europe, is not needed by the global West. The Europeans had enough of Poland, from which they grew not a showcase of Western democracy, as planned, but a competitor. A competitor who is ready to do anything for the favor of the United States, but not Europe.

It is much safer to follow the path of the USSR, Yugoslavia or Czechoslovakia. Destroy the state through civil war, external attack or peacefully through elections. A few small states that have little meaning in international politics will not be able to break the structure of relations in Europe, but another Poland will really change.

Alas, this suits the Ukrainians themselves quite well. Despite the militant rhetoric and calls for unity, the east of the country is more and more inclined to separate from the western part of the country and vice versa, the west does not see itself in the same state with the east. The rift is growing.

If a referendum on the unity of Ukraine were held today, I would definitely not bet that the people would vote for a united country. And it is not we, not the NWO, and not even the United States and the West that are to blame for this. The Ukrainians themselves are to blame, who for many decades of living in the USSR, and then in an independent state, never became a people, a political nation.

Personally, I am sad to see how the people, the state, the nation, which the Bolsheviks took care of for so long, then the communists, as it turned out, did not become part of the great Soviet, Russian people. Small peoples, several thousand and even hundreds of people, have become part of a great people, have become a great people, but the huge Ukrainian people have not.

Frankenstein is still Frankenstein. A monster assembled from pieces of people... Or, which should be closer to the Ukrainians, Sharikov remained just Sharikov even in the guise of a man... But the most important thing is that nothing can be changed. Rubicon crossed...