St. Andrew’s flag hoisted on the Admiralty building in St. Petersburg in honor of the relocation of the General Staff of the Navy 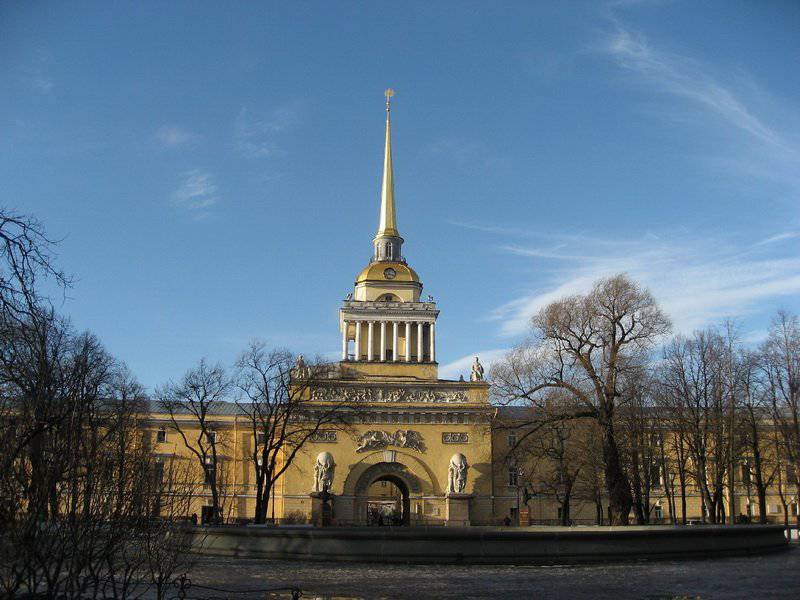 "The command of the headquarters was completely relocated, the equipment was completely relocated, the Ministry of Defense allocated housing for senior and junior officers," Admiral Viktor Chirkov, commander of the Navy, said during the ceremony. He noted that "basically the work of the headquarters will not change." "On combat readiness fleet (relocation) will not be reflected, because today there are means of communication that allow us to work anywhere, "the commander explained." The advantage of relocating is that there is a leading scientific thought and industry that is engaged in the construction and development of the fleet, " he added.

In turn, the governor of St. Petersburg Georgy Poltavchenko noted that "moving the main headquarters of the Navy from a political and economic point of view is very appropriate for the city." "This raises the status of the city, returning it the status of the naval capital," he said. The governor added that this would allow receiving additional budget revenues by placing state defense orders at urban shipbuilding enterprises.

After the move, the Russian Fleet Command was housed in a historic building complex where the Naval Ministry of the Russian Empire was located until 1917. "It feels like the fleet has returned to its cradle. For Petersburgers, this is another reason to be proud of their city," said the governor.

The first building of the Admiralty, designed by Peter I, was intended as a complex of shipyards, docks and workshops for the construction and repair of ships. The building was laid on the left bank of the Neva in the autumn of 1704. It was a single-story notched hull in the shape of the letter "P" with an extensive courtyard open to the Neva.

The Admiralty was not only a shipyard, but also a fortress. All the buildings were surrounded by an earthen wall with five bastions and surrounded by a deep moat, through which a drawbridge was built. On the earthen wall around the fortress mounted guns. At the end of 1705, the main construction work was completed, the first ship from this shipyard was launched in April 1706. During the reign of Emperor Peter, 262 warships left here.

In the 1727-1738, a stone Admiralty building was erected. At the beginning of the XIX century, it was decided to rebuild the Admiralty, so that its appearance was in harmony with the parade center of the Russian capital. The building, designed by architect Zakharov, has been preserved to this day. The grand building, the length of the main facade which reaches 406 meters, consists of two U-shaped buildings. The building is decorated with a tower, surrounded by a colonnade and topped with a dome with a spire. It is equipped with a weather vane, which has become one of the symbols of St. Petersburg.

After a strong fire in 1783, Ekaterina P transferred all shipbuilding services to Kronstadt, and in the Admiralty building the naval facilities have since been located. In 1832, the Ship Architecture School opened here. Later, the building housed the Naval Ministry, the Naval Headquarters, the Higher Naval Engineering School named after F.E. Dzerzhinsky. Until the end of 2008, the headquarters of the Red Banner Leningrad Naval Base was deployed in the Admiralty. After the transfer of the capital from Petrograd to Moscow, the main headquarters of the Navy was located for many years in Bolshoi Kozlovsky Lane.

To the northern capital in May 2008, in accordance with a decree of the President of the Russian Federation, in historical The Senate building on Decembrists Square was moved from Moscow by the Constitutional Court. Recently, there have been reports in the media about a possible relocation by 2015 of the Supreme Court of the Russian Federation to St. Petersburg, as well as the Supreme Arbitration Court.